The CityRail Millennium or M set is a class of electric multiple unit operated by CityRail in Sydney, New South Wales, Australia. It is one of CityRail's newest members of the fleet and was the first "4th generation train" on the network. The fourth generation trains were put into service from July 1, 2002[1] after short delays due to electrical defects.[2] The trains can operate over the entire suburban network, but they currently operate in Sector 2.

The Waratah trains were subsequently based on the design of the Millennium train, adopting many features including interior carriage design. [3]

The Millennium train, like the Tangara, is a double decker, four car consist, with the middle two cars being non-control motor cars and the two outer cars being driving control trailer cars fitted with the pantograph. The Millennium train is equipped with an AC drive system, whereas the Tangara has a DC drive system (except G7, which was scrapped after the Waterfall train disaster). Two four car sets are usually combined to form an eight car set.

The cars were constructed by EDI Rail in Cardiff, NSW.[4] As part of the purchase conditions, the manufacturer has a 15 year contract to maintain the trains at their own maintenance centre at Eveleigh, near Redfern Station. During testing and initial revenue service, the train ran as four car sets, with eight car sets commencing service towards the end of 2002 after further testing. All 35 four car sets were delivered by October 2005.

The Millennium trains were criticised for having several technical problems and causing problems with the CityRail network; they were referred to in the media reports as The "Mi-lemon" and "Millenni-Bug" as a result. Some of the problems were caused by insufficient power supply on the overhead to cope with the power demands of the more technologically advanced trains causing them to shut down. Software bugs also contributed to the trains' poor reliability.

The Millennium trains were withdrawn from service in April 2003 while the problems were being rectified and a full audit was carried out.[1] They were subsequently reintroduced into service in June 2003 and have since been operating on Sector 2. 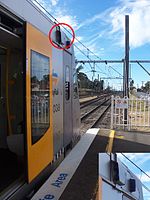 An exterior camera on a Waratah carriage

In late 2008 some trains were fitted with external cameras atop of carriages near the doors, testing their use for the then-future Waratah trains. These cameras were subsequently incorporated into the final design of the Waratah train.[5]

On 10 October 2011, an empty Millennium set was involved in a shunting incident with an empty Endeavour set which was docked at the Eveleigh Train Yards in Redfern. The lead car only sustained minor damage with no injuries reports.[6]