Montezuma Castle National Monument, located near Camp Verde, Arizona, in the Southwestern United States, features well-preserved cliff-dwellings. They were built and used by the Pre-Columbian Sinagua people, northern cousins of the Hohokam,[3] around 700 AD. Several Hopi clans trace their roots to immigrants from the Montezuma Castle/Beaver Creek area. Clan members periodically return to their former homes for religious ceremonies. When European Americans discovered them in the 1860s, they named them for the Aztec emperor (of Mexico) Montezuma II, due to mistaken beliefs that the emperor had been connected to their construction.[4] (See also Montezuma (mythology).) Neither part of the monument's name is correct. The Sinaqua dwelling was abandoned 100 years before Montezuma was even born and the Dwellings were not a castle. It was more like a "prehistoric high rise apartment complex".[5] 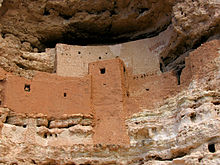 Closeup view of the Castle

Montezuma Castle is near the top of a Verde Valley cliff and is one of the best preserved cliff dwellings in North America. The area was briefly abandoned to due to volcanic ash from the Sunset Crater Volcano. It is likely that the sediment from that aided in agricultural endeavors when the Sinagua arived. During the interim, the Sinagua lived on the hills nearby and sustained themselves on agriculture dependent on rain. After 1125, the Sinagua resettled in the Verde Valley and used irrigation systems left by the Hohokam.[6] The monument itself encloses 826 acres and lies at the intersection of the Colorado Plateau and Basin and Range physiographic provinces. The latest estimated date of Sinagua occupation for any site is for Montezuma Castle National Monument around 1425 AD. The reasons for abandonment of their habitation sites are not yet known, but warfare, drought, and clashes with the newly-arrived Yavapai people have been suggested. The five-story stone and mortar dwellings contain 20 rooms and once housed about 50 people. A natural overhang shades the rooms and shelters them from rain. Another part of the cliff wall bears the marks of an even larger dwelling, which has not survived. Due to heavy looting, very few original artifacts remain. The discovery of Castle A in 1933 revealed many Sinagua artifacts and greatly increased our understanding of their way of life.

The castle was carved into the limestone of a high cliff. This shows that the Sinaqua were very daring builders. It took ladders to climb Montezuma Castle which made it incredibly difficult for enemy tribes to penetrate the natural defense of the vertical barrier.[5]

The dwellings and the surrounding area were declared a U.S. National Monument on December 8, 1906 as a result of the American Antiquities Act, signed earlier in June of the same year. It was one of the four original sites designated National Monuments by President Theodore Roosevelt. The National Monument was listed on the National Register of Historic Places on October 15, 1966.[7]

This is an easy monument to visit, a short distance off Interstate 17, exit 287. There is a paved trail a 1/4 mile from the visitor center along the base of the cliff containing the ruins. Access to the ruins has not been allowed since 1950 due to extensive damage of the dwelling. About 350,000 tourists visit the site each year.

The visitor center includes a museum about the Sinagua and the tools they used to build the dwellings. The Montezuma Castle site houses many artifacts, such as stone tools, metates used for grinding corn, bone needles and ornaments of shell and gemstone which prove that the Sinagua were fine artisans. All of these relics are on display at the Montezuma Visitors Center.[8] There is also a gift shop.