Pin-up girl
"Pinup" redirects here. For other uses of pinup or pin-up, see Pin-up (disambiguation).
For the 1944 film, see Pin Up Girl (film). 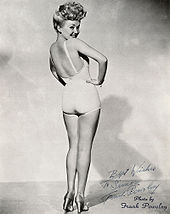 A pin-up girl, also known as a pin-up model, is a model whose mass-produced pictures see wide appeal as popular culture. Pin-ups are intended for informal display, e.g. meant to be "pinned-up" on a wall. Pin-up girls may be glamour models, fashion models, or actresses.

The term pin-up may also refer to drawings, paintings, and other illustrations done in emulation of these photos (see the list of pinup artists). The term was first attested to in English in 1941;[1] however, the practice is documented back at least to the 1890s.

The pin-up images could be cut out of magazines or newspapers, or be from postcard or chromo-lithographs, and so on. Such photos often appear on calendars, which are meant to be pinned up anyway. Later, posters of pin-up girls were mass-produced and became an instant hit.

Many pin-ups were photographs of celebrities who were considered sex symbols. One of the most popular early pin-up girls was Betty Grable, whose poster was ubiquitous in the lockers of G.I.s during World War II. Other pin-ups were artwork, often depicting idealized versions of what some thought a particularly beautiful or attractive woman should look like. An early example of the latter type was the Gibson girl, drawn by Charles Dana Gibson. The genre also gave rise to several well-known artists specializing in the field, including Earle K. Bergey, Enoch Bolles, Alberto Vargas, Gil Elvgren, George Petty, and numerous notable artists, such as Rolf Armstrong and Art Frahm.

Notable contemporary pin-up artists include Elias Chatzoudis, Armando Huerta, and Chuck Bauman. Another is popular Pin-Up Artist Olivia De Berardinis who is most famous for her Pin-Up Art of Bettie Page and her pieces in the earlier editions of Playboy.

Other kinds of pin-ups

In comic books, a pin-up is simply a full-page piece of artwork, most often without dialogue, that showcases a character, group of characters, or significant event, published within an issue, rather than made available by itself as a poster.

In professionally published fan magazines for films and television series, a posed photograph of actors or actresses from the subject matter, but which might also showcase specific scenes from the subject matter in photograph form (called stills) are occasionally called pin-ups. The label is very casual, though, as these types of fan media are more accurately described as posters.

Pin-ups are also referred to as "cheesecake", the male counterpart being "beefcake".