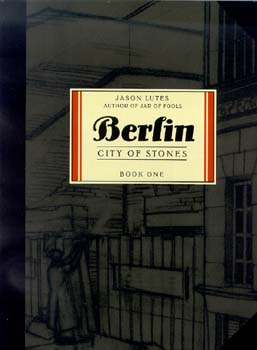 "Berlin" is the title of a series created by and published by and then . Planned as a series of 24 magazines, it describes life in from 1928 to 1933, during the decline of the .

The first eight issues were compiled into a book titled "Berlin: City of Stones", published in 2000. It starts with Marthe Müller, an art student, arriving in Berlin. One story arc details the start of her life in Berlin, focusing on her relationship to journalist Kurt Severing. A second story line describes a working class family which breaks up due to differing political views, the mother eventually joining the communists with their daughters, while the father takes their son to the s. The book ends with the massacre of 1 May 1929, the (known in German as "Blutmai").

Issues 9–16 have been compiled in "Berlin" book two: "City of Smoke", published in 2008. [ [http://www.newsarama.com/comics/100801-Berlin2.html Back to the City - Jason Lutes on Berlin 2] , , October 1, 2008] In the second volume, the relationship between Marthe and Kurt disintigrates, partly due to the influence of Kurt's former lover Margarethe. Marthe develops a relationship with fellow art student Anna. A major subplot involves a group of African-American jazz musicians who perform at a Berlin nightclub. The volume concludes with the electoral victory of the in September 1930.

The series has been collected into trade paperback: