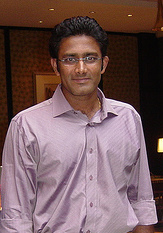 Anil Kumble ( _kn. ಅನಿಲ್ ಕುಂಬ್ಳೆ) audio|Anil_Kumble.ogg|pronunciation (born 17 October 1970 in , ) is an Indian er. He is a right-arm (legbreak ) bowler and a right-hand batsman. He is currently the leading wicket-taker for India in both Test and matches. At present he is the third highest wicket-taker in Test cricket and one of only three bowlers to have taken more than 600 Test wickets. Kumble has had success bowling with other spinners, notably and in the 1990s and since 2000.

Kumble was appointed the captain of the Indian Test cricket team on 8 November 2007 [ [http://content-usa.cricinfo.com/india/content/current/story/318897.html Cricinfo - Kumble to captain in Test series against Pakistan ] ] . His first assignment as captain was the three-test home series against Pakistan that India won 1-0. Then he led the Indian Test team on its tour to Australia for the 2007-08 four-test series of The Border-Gavaskar Trophy that India lost 1-2. Kumble succeeds his state team mate Rahul Dravid, who resigned as the captain in September 2007 [http://content-usa.cricinfo.com/indvpak/content/story/310880.html] . Since his debut in in 25 April 1990, he has taken over 600 Test wickets and 330 ODI wickets. Although often criticized as not a big turner of the ball

Anil Kumble was born in , to KN Krishna Swamy and Saroja.

Kumble began playing cricket on streets of Bangalore and joined a club called "Young Cricketers" when he was 13 years old. Kumble did his primary schooling at Holy Saint English School and his high schooling at National High School, . He got his Pre-University College education from National College, Basavanagudi. Kumble graduated from in in 1991-92. Anil's studious dispensation is not without a basis in fact. Prior to his selection for the England tour, he did exceedingly well in his academics passing mechanical engineering with distinction in the top of his class. Anil was dedicated enough to be promoted at the end of each year to the next grade. Two of his college team mates, M.P. Vivek and Rashid Mohsin went on to have scintillating but short lived first class careers. Kumble has a brother by name "Dinesh". He has a nickname "Jumbo" not only because his deliveries, for a spinner, are "as fast as a Jumbo jet"., but also because his feet are quite big or "Jumbo" as observed by his team-mates.

Kumble is a right-arm with an unorthodox style, most famous for his flipper. He started his career as a medium pacer, which has given him a useful faster delivery. He relies more on accuracy, variations and bounce than spinning the ball.

He made his first-class debut for Karnataka against Hyderabad in November 1989, taking 4 wickets and bagging a pair. He was selected for India Under-19s against Pakistan Under-19s, scoring 113 in the first test and 76 in the second. He made his ODI debut against Sri Lanka at Sharjah in the on 25 April 1990. He also made his Test debut in that year on India's tour of England in the second Test. It was when India toured South Africa in 1992 that he established himself as a quality international spinner, taking 8 wickets in the second Test. Later that year, when England toured India, he took 21 wickets in just 3 Test matches at an average of 19.8.

He took his first 50 Test wickets in just 10 Test matches, the fastest an Indian bowler had achieved the milestone. He went on to become the second fastest Indian bowler to reach 100 Test wickets (in 21 Test matches), after Erapalli Prasanna. On 27 November 1993, he took 6 wickets for 12 runs in an ODI against the West Indies at , a new record for best bowling figures by an Indian, one that has remains unbeaten till date.

Kumble is one of only two bowlers ever (the other being ) to have taken all 10 wickets in a Test . Kumble achieved this against Pakistan in the second Test played in between 4 February and 8 February 1999, although by failing to dismiss Pakistan's in either innings, he missed out on the achievement of dismissing all 11 batsmen in a Test match. It has been said that once he had got 9 wickets his friend and teammate tried not to take a wicket so that Kumble could take the 10th.Fact|date=April 2008 The achievement was commemorated by naming a traffic circle in after him.

On 6 October 2004, Kumble became only the third spinner in the history of Test cricket (after and ) and the second Indian bowler (after ) to capture 400 Test wickets. Reaching the mark took him 30 fewer Test matches than it took Kapil Dev, and 7 fewer than Warne. He is one of only 2 Indian bowlers (the other being Javagal Srinath) and one of only 3 spinners (the others being Muralitharan and ) to have taken over 300 ODI wickets. In the India-West Indies series of 2006, Kumble took 6-78 in the second innings of the final Test in , , and bowled India to a historic series victory; it had been 35 years since a similar series victory. During the first innings of the match, Kumble scored 45 and became the second player in the history of the game (after Warne) to score 2000 runs and take over 500 Test wickets.

On 10 August 2007, Kumble scored his maiden century, with an innings of 110 not out against England to help them finish with 664. He took 118 Test matches to reach his maiden Test hundred, which is a record, beating who had held this record previously with 96 Tests. It was also the only hundred by an Indian in the 3 Test series.

Anil Kumble is perhaps India's best current spinner in a side which is beginning once again to consider a viable attacking option.

He is one of the 4 bowlers, alongside , Shane Warne and Muttiah Muralitharan, and the only Indian bowler ever, to have taken 5 wickets in a Test innings more than 30 times. He also holds the world record for the largest number of caught-and-bowled dismissals in tests, 28. His ODI bowling average, which is above 30, is considered high compared to other great bowlers, and he is known to be a much better bowler in India than elsewhere. He is also one of 4 Indian bowlers to have conceded over 250 runs in a Test match, although he took 12 wickets in that match. He is known for bowling tirelessly, having bowled 72 overs in a Test innings once. He is also remembered for his tenacity in bowling even when injured, especially after an incident in a match against West Indies where, despite having his broken jaw being heavily taped, he came back to prise out the wicket of .

His Test batting average is acceptable for a lower order batsmen; however, his unconvincing running in ODIs, giving him a fairly ordinary average of around 10, has prevented him from becoming an . His fielding is considered adequate and he usually fields on the boundary or at gully.

On 17 January 2008, in the third Test against Australia at WACA, Perth, Anil Kumble became the first Indian bowler and the third in the world to reach the milestone of 600 Test wickets. Kumble achieved the record just after the tea break when he had Andrew Symonds caught by Rahul Dravid at first slip. In a friendly gesture, Adam Gilchrist shook hands with Kumble and congratulated him. Kumble would go on to lead India to its first Test victory in Perth and deny Australia a record of 17 consecutive test victories. Kumble's 600 wickets came in 124 matches at an average of 28.68. Kumble has captured most number of wickets against Australia by an Indian bowler. He has taken 104 Australian scalps in 17 matches at an average of 27.5.

Kumble is the third bowler after and to take 600 Test wickets. Paying tribute to Kumble on reaching this milestone, cricket analysts have provided some interesting insights to his bowling skills, specifically vis-a-vis Warne and Muralitharan. , the editor of "", writes:

"That he [Kumble] has been an unusual spinner has been said many times before. It has also been said, a trifle unfairly, that he is a unidimensional bowler. Palpably, he has lacked the turn of Warne and Murali, but his variety has been subtler, far more apparent to batsmen than to viewers. He has shown that not only turn and flight that can deceive the batsman but also the changes of length and pace. He has been a cultured practitioner of his unique craft and a master of nuances."

Columnist and former cricketer interestingly argues that in a bowling method that relies more on precision rather than big turns, Kumble is closer to fast bowler rather than his fellow spinners Warne and Muralitharan:

"Curiously, Kumble has little in common with his two great contemporaries, Shane Warne and Muttiah Muralitharan. They relied on excess, spinning the ball ferociously and able, by sleight of hand, to fool batsmen into playing at thin air. They created error by destroying hope.

Kumble more closely resembles Glenn McGrath because he does not so much baffle batsmen as torture them with precisely-pitched deliveries. Like the Australian, he does not tear opponents apart, just works away methodically till the deed has been done. Apparently he is an engineer, but he belongs in the courts of law as an inquisitor."

During the 4th test against Australia at the Adelaide Oval on 25 January 2008, Kumble was only 13 runs short of his 2nd test hundred by scoring 87 runs off 205 balls, with 9 fours in India's first innings of 526. Only scored more than him, with a masterful 153 runs off 205 balls.

Man of the Series awards