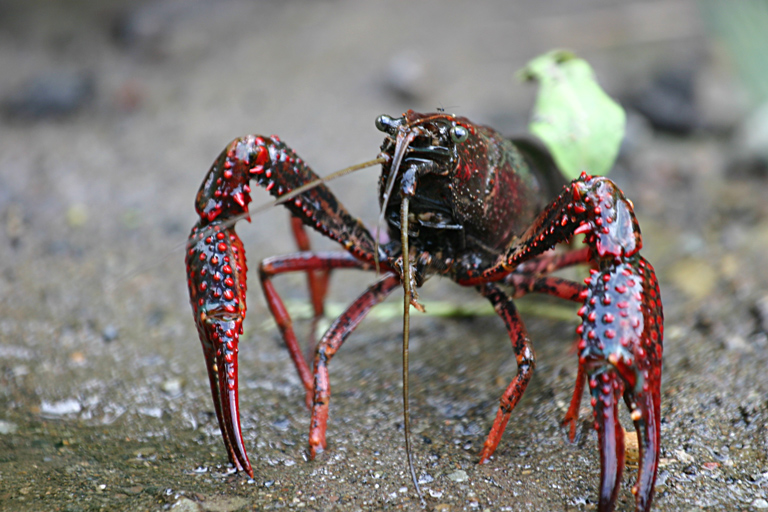 "Procambarus clarkii" is a freshwater , native to the , but found also on other continents, where it is often an invasive pest. It is known variously as the red swamp crawfish, red swamp crayfish, Louisiana crawfish or Louisiana crayfish.

The native range of "P. clarkii" is along the Gulf Coast from northern to the , as well as inland, to southern and . It has also been introduced, sometimes deliberately, outside its natural range to countries in , , and elsewhere in . In northern , the populations are self maintaining but not expanding, while in southern , "P. clarkii" is multiplying and actively colonising new territory, at the expense of the native crayfish, "" and "Austropotamobius spp.". Individuals are reported to be able to cross many miles of relatively dry ground, especially in wet seasons, although the trade and anglers may have hastened the spread in some areas (it is believed that anglers using "P. clarkii" as bait introduced it to the American state of ). Attempts have also been made to use "P. clarkii" as a biological control organism, to reduce levels of the s involved in the life cycle of , leading to the dispersal of "P. clarkii" in, for instance, .

"P. clarkii" is most commonly found in warm , such as slowly-flowing s, es, reservoirs, s and rice paddies. It is considered to be the most ecologically plastic species in the Order , and is able to grow quickly even in only seasonally present water, being able to tolerate dry spells of up to four months. "P. clarkii" grows quickly, and is capable of reaching weights in excess of 50 g, and sizes of 5½–12 cm long. It is also able to tolerate slightly saline water, which is unusual for a crayfish. The average lifetime of Procambarus clarkii is 5 years. It is known that some individuals have reached ages (in nature) over 6 years.

The rapid growth and ecological tolerance of "P. clarkii" facilitates a large farming industry in , worth millions of dollars annually, and with more than 500 km² in cultivation. Harvests of "P. clarkii" account for a large majority of the crayfish produced in the and elsewhere. "P. clarkii" has also been introduced elsewhere for cultivation, such as , where its success is attributable to its ability to colonise disturbed habitats that would be unsuitable for the native crayfish. "P. clarkii" is also marketed by biological supply companies for teaching and research.

The burrowing activities of "P. clarkii" can lead to damage to water courses and to crops, particularly crops, and its feeding can disrupt native ecosystems. It may out-compete the native crayfish species, and is a vector for the fungus "Aphanomyces astaci", for crayfish virus vibriosis and a number of s parasitic on s.

"Procambarus clarkii" was named by in honour of John H. Clark, who surveyed the US-Mexican border in 1851.Fact|date=January 2008