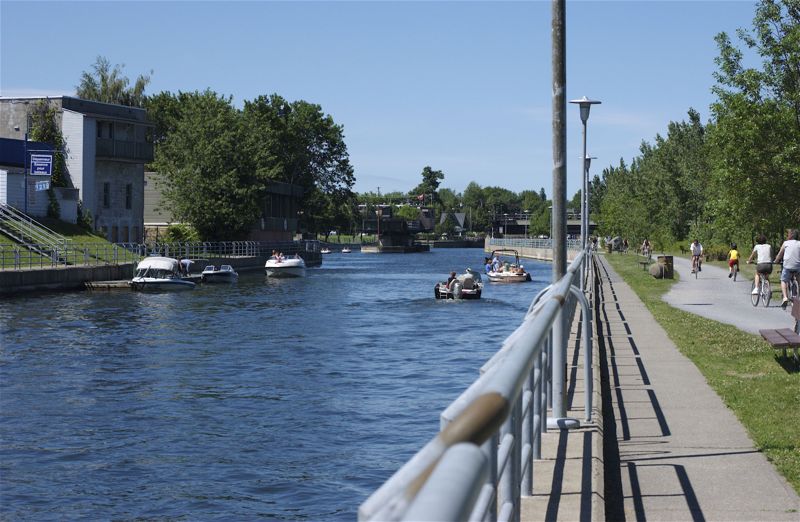 The city historically was an important transportation hub. The first rail line in North America connected it with La Prairie in 1836. It is also the host of the "Festival International des Montgolfières", an international hot-air balloon festival, which attracts thousands of tourists that come to see the hundreds of balloons in the sky every year.

The extends km to mi|20|spell=commonwealth|precision=0 north along the west bank of the river and provides modern freight passage to Chambly and the . The canal has one lock near the downtown core of St-Jean-Sur-Richelieu. In the winter, the city builds a skating rink on the canal near the lock. In the summer, the embankment on the east side of the canal has a km to mi|20|spell=commonwealth|precision=0 cycling path.

Known to the early English settlers as St. Johns, the site was fortified in the 17th century. Later, the French built on the site. It provided an important communication link during the . During the control of the town changed hands several times as the British and American forces moved through the area.Today's St-Jean is a manufacturing centre of textiles, food and wood products. It hosts an Area Support Unit of the which acts as the primary recruitment and officer training establishment. Until 1995 ASU St-Jean housed "", a bilingual military academy. The only remaining military university in Canada was the in from 1995–2007. The federal government will reopen the military college at St. Jean sur Richelieu in fall 2007 to provide a two-year program in French.

In 2001, a new city organization was created as a regional county municipality including several adjoining communities, and the city's population was adjusted to 79,600. This merger was requested by the five municipalities involved, and was not part of the municipal fusions that were decreed unilaterally by the government the next year. The amalgamated municipalities are as follows (with 2001 populations):
* Saint-Jean-sur-Richelieu (37,386)
* Saint-Luc (20,573)
* Iberville (9,424)
* Saint-Athanase (6,691)
* L'Acadie (5,526)

Saint-Jean-sur-Richelieu is the birthplace of all the drivers family Villeneuve: Gilles, Jacques Sr. and Jacques (1997 World Champion).