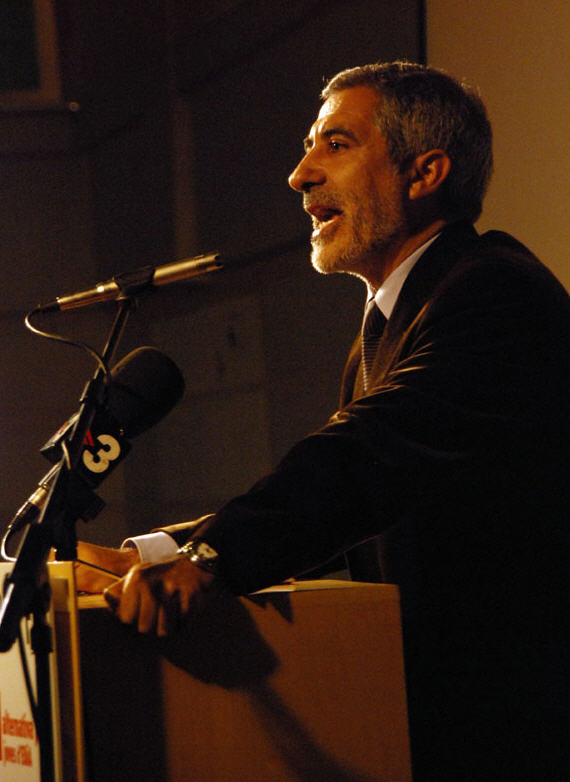 Gaspar Llamazares Trigo M.D (born , in , La Rioja, ) is a Spanish politician. He was the leader of the leftist coalition (IU, "United Left") from 2001 to 2008, in the post of General Coordinator. He is a member of (PCE).

Second of six brothers and sisters, he spent his childhood and youth in Salinas, , .He studied in the and in the , where he received his degree. There he founded "Bocetos" ("sketches"), a medical publication attempting to focus especially on the social issues of medicine, unlike the biological paradigms then dominating in medicine. He then completed his studies with a Masters in Public Health in the University of Havana, in . In 1985, back in Spain, he started teaching in the University of Santiago de Compostela and then in the Unidad Docente de Medicina de Familia in ().

He entered the Communist Party in 1981. In 1988 he was elected Secretary General and General Coordinator of Izquierda Unida in Asturias. In 1991 he was elected deputy to the regional parliament of Asturias, where he was spokesman for Izquierda Unida's group. In this chamber, IU collaborated with governments of the until 1995.

Llamazares was the General Secretary of the PCE in the autonomous community of and member of Asturias' Parliament between 1988 and 2000.

During the 2000-2004 legislature Llamazares was one of the most vocal opponents of 's government in congress.

Llamazares was reelected General Coordinator in the seventh Federal Assembly of IU held in being opposed by then Deputy for Cordoba who was backed by several regional minorities along with the ist faction "" and Juan Manuel Sanchez Gordillo Mayor of , Seville who was supported by the more radical factions of IU (mainly and ). Llamazares obtained a clear majority and was appointed Prime Ministerial candidate.

In the 2004 general election, Llamazares was elected Deputy for Madrid (as it is tradition for the Prime Ministerial Candidates of the national parties to be candidates for Madrid) but IU obtained its worst result ever with only 3 seats in Congress (5 in coalition with ). This led to a large number of IU members blaming the results on Llamazares. In the IU won only 1 from the previous 4 in 1999 (IU was in a joint list with Initiative For Catalonia that won 2 MEPs - one for each - that joined separate groups in the European Parliament). That led to Llamazares to call for an Extraordinary Assembly.

In the eighth (Extraordinary) Assembly of IU, Llamazares, who was backed by the more centrist Factions of IU as well as the Green-left factions and the more nationalist leaning factions, was opposed by , a lawyer initially supported by the young , and later Communist Party of Spain leadership, and Sebastian Martin Recio, Mayor of supported by the Andalusian minority as well as "Espacio Alternativo". (Previously Santiago and Martin Recio reached an agreement to vote in the most supported of both in the political council. Llamazares won 54 seats, while Santiago won 42 and Martin Recio 14. The sum of Santiago and Martin Recio lists gave the first 56 votes. But a last hour amendment introduced during the assembly to the IU , giving the General Coordinators of the Federations the right to vote for the General Coordinator threw a result of 67 for Llamazares, 51 against and 8 abstentions, allowing Llamzares to be reelected as Coordinator General.

In May 2007 prior to the Municipal Elections Llamazares Became the first national Political Leader to campaign through [ [http://www.elmundo.es/navegante/2007/05/05/juegos/1178376596.html Llamazares, de campaña por 'Second Life' | elmundo.es ] ] . During the electoral campaign Llamazares announced he will not rerun as candidate for General Coordinator of IU in the following Assembly, supposedly scheduled for Autumn that year. In July 2007 Llamazares announced he will intend to run once more as candidate for prime minister, decision that caused several controversies inside the organization, specially amongst the Communist Party of Spain, and other sectors considered to be on the left of IU, along with that it was announced that the upcoming general assembly will be postponed to after the General Election scheduled for March 2008. On October Maraga Sanz a member of the Communist Party of Spain's Standing Committee and it's General Secretary in the announced her intention to run against Llamazares for IU's nomination to prime ministership, Primary elections were held in the last weeks of October and the beginning of November 2007 with Llamazares victorious.

In March 2008, in the immediate aftermath of IU's worst ever General Election results, Llamazares resigned the leadership of IU.