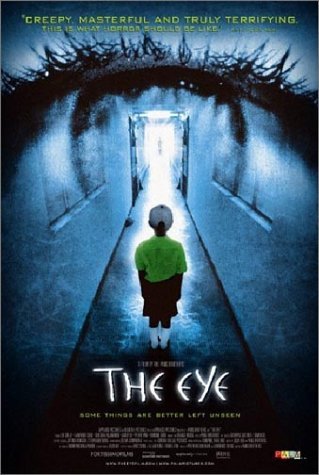 from the age of two, 20-year-old classical violinist Mun undergoes an eye transplant. At first, she is happy to have her sight restored, but is soon troubled when she starts to see mysterious figures that seem to foretell gruesome deaths. Her first night in the hospital she sees the blurry image of a shadow accompanying a patient out of her hospital room. The next morning she wakes up to find that patient dead.

She confronts her doctor's nephew (a psychologist) about the strange entities she has been seeing through her new eyes. He seems hesitant to believe her at first, but seeing as he cares about her and admitted to her as being "more than a patient" he trusts her judgment and accompanies her on a trip to where they learn of Ling, the donor of the corneas. They are at first told by a village doctor, when asking about Ling and her family, to not bother with it, but then, when it is mentioned she sees everything that Ling sees, the doctor seems to become more cooperative.

Having the ability to see death causes them to look down upon her as a witch and chase her away whenever she comes near. One day, Ling foresees a huge disaster. Despite her pleas, no one believes her; some even throw water at her to make her leave. Soon enough, the village becomes engulfed in a huge explosion from an unknown cause, killing at least 300 people. Ling and her mother survive because their house was situated far away from the blast. Feeling that it was all her fault, Ling hangs herself.

Ling's mother is both depressed and outraged; during all those years, she had always protected her daughter and had never given up on her. Yet, Ling gave up on herself; therefore her mother would not forgive her. Because of this, Ling's spirit becomes restless, reliving her death night after night. Ling eventually possesses Mun and begins to have her hang herself. Hearing Ling's cries for help, her mother rescues her daughter and the two make up. Shortly thereafter, Ling's spirit leaves.

On the way back, Mun's bus stalls in a traffic jam. As she looks out the window, she sees hundreds of dark figures lumbering about in the street. Horrified, she runs out of the bus. Knowing a huge catastrophe is imminent, she runs through the stopped cars yelling for people to get out. Suffering the same fate as Ling, no one believes her, thinking she is crazy (for they do not understand anything that the Chinese-speaking Mun is trying to tell them).

Meanwhile up ahead, the cause of the traffic jam is a huge tanker truck that has toppled over and is blocking the entire road. Unknown to everyone, it starts leaking as it spreads along the ground; a driver, who had turned off his engine earlier, restarts it, triggering a fire. The fire reaches the truck and it explodes, causing a chain reaction as other cars blow up and knock over a telephone pole. Dr. Wah runs forward, realizing that Mun is missing, and saves her from possible death; however, shards of glass pierce her eyes, blinding her just before Dr. Wah jumps to cover her as she falls onto the pavement, which saves her from being scorched by the fire. Afterwards, the dark figures lead the souls of the deceased away as Mun lays unconscious. In a flashback, Ling, observing, stands alone as the village burns around her. She breaks down and starts crying.

In the epilogue of the film, we are shown a scene similar to the beginning of the film - that of Mun (now blind, once again) walking the streets of Hong Kong. She admits that she does not want her sight, after seeing all she was meant to have seen, and seeing it through Ling's eyes. However, now she isn't alone, and has the friendship and support (and possible love interest) of Dr. Wah.

"The Eye" is a co-production of in and of , and was shot in Hong Kong and with a pan-Asian cast and crew, including Malaysian-Taiwanese actress , Chinese-Canadian singer , Singaporean singer-actor and Thai actress Chutcha Rujinanon.

Danny and Oxide Pang said they were inspired to write the screenplay for "The Eye" by a report they had seen in a Hong Kong newspaper 13 years before, about a 16-year-old girl who had received a corneal transplant and committed soon after.

"We'd always wondered what the girl saw when she regained her eyesight finally and what actually made her want to end her life", Oxide said in an interview.

The film received generally favorable reviews from critics in North America. On the review aggregator , 69% of critics gave the film positive reviews, based on 91 reviews. [cite web|url=http://www.rottentomatoes.com/m/eye/ |title=The Eye - Rotten Tomatoes |accessdate=2007-10-14 |publisher=] On , the film received an average score of 66 out of 100, based on 26 reviews. [cite web|url=http://www.metacritic.com/video/titles/eye |title=Eye, The (2003): Reviews |accessdate=2007-10-13 |publisher=]