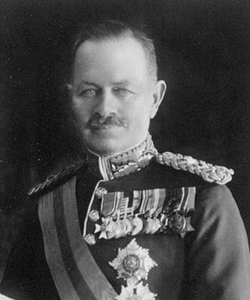 order = 12th
office = Governor General of Canada
monarch = George V
primeminister = ,
term_start = ,
term_end = ,
predecessor = Victor Cavendish, Duke of Devonshire
successor = Freeman Freeman-Thomas, Marquess of Willingdon
birth_date = birth date|1862|9|11|mf=y
birth_place = ,
death_date = death date and age|1935|6|6|1862|9|11
death_place = ,
spouse =
profession = Officer
religion = |
Julian Hedworth George Byng, 1st Viscount Byng of Vimy GCB GCMG MVO ( &ndash; ) was a officer who served with distinction during with the in , in the of the campaign, as commander of the , and as commander of the .

Known to friends as "Bungo", ["Canada's Army"] Lord Byng later became the twelfth . The Canadian Government's eventual response to his actions in the led to a marked redefinition of the role of Governor General in constitutional matters for Canada and for the other s of the .

Byng was born at , , , the seventh son and youngest child of , entitling him to the style "The Honourable". He was educated at Eton, but did not enter the . Despite their rank, his family were not well-off and could not afford to obtain a regular army commission for their youngest son, and at the age of seventeen he was instead commissioned in the (later 7th Battalion, ) in December 1879. [LondonGazette |issue=24794 |date= |startpage=7536] He was promoted in 1881. [LondonGazette |issue=24968 |date= |startpage=2118] However, Byng's father was an old friend of the Prince of Wales, who obtained a place for him in his own regiment, the . He transferred into the regiment as a Lieutenant in January 1883 [LondonGazette |issue=25192 |date= |startpage=464] and in March joined them in , . It was an expensive regiment to belong to, but Byng managed by buying polo ponies cheaply, training them (he was an excellent horseman), and selling them for a profit.

En route home to Britain in 1884, the 10th Hussars were diverted to to join the Expedition. Byng rode in the charge at the on and had his horse killed under him at the on . In October 1886 he was appointed regimental [LondonGazette |issue=25635 |date= |startpage=5056] at , a post he held successfully for four years. He was promoted in 1889. On he commanded the s (who were from his regiment) at the funeral of Queen Victoria's grandson, . [LondonGazette |issue=26254 |date= |startpage=602 |supp=yes] In 1894 he graduated from the and was appointed a . In 1897 he became Deputy Assistant of . In 1897 he was promoted .

When the First World War broke out, Byng was recalled to Britain to command the . He went to with the and handled his men well at the . In March 1915 he was appointed (KCMG) and in May 1915 he was given command of the as a Temporary . Three months later he went to to command IX Corps [LondonGazette |issue=29429 |date= |startpage=306 |supp=yes] and supervised the successful British withdrawal from the ill-fated campaign, for which he was appointed (KCB) in 1916.

In February 1916, after spending some time commanding the defences, Byng returned to the Western Front in command of XVII Corps. Three months later he took over the Canadian Corps and was promoted substantive Lieutenant-General for distinguished service. With his subordinate, Major-General , he gained his greatest glory with the Canadian victory at the in April 1917, an historic military victory for Canada that inspired nationalism at home.

Following this victory, Byng took command of the Third Army in June 1917 with the temporary rank of , [LondonGazette |issue=30178 |date= |startpage=6956 |supp=yes] where he conducted the first surprise attack using s at Cambrai, considered a turning point in the war. For these services he was promoted to the substantive rank of General. He remained in command of the Third Army, the largest of Britain's armies, until the end of the war.

Lord Byng was appointed Governor General of Canada on , [LondonGazette |issue=32424 |date= |startpage=6483] having been appointed (GCMG) in July 1921. He was very popular in Canada, and during his travels across the country throughout his term of office he was enthusiastically greeted by the men he had led in wartime. His appointment was far less controversial than that of his predecessor, the Duke of Devonshire. This was partly due to his popularity, but also because he was appointed following direct consultation with the Canadian government.

Lord Byng took to the office enthusiastically, further entrenching many of the traditions established by his predecessors. He also broke with tradition and was the first Governor General to appoint Canadian aides-de-camp. One of them was , who later himself served as Governor General from 1959 to 1967.

He was always passionate about sport, and both he and his wife particularly loved ; Lord Byng rarely missed a game played by the Ottawa Senators. In 1925, Lady Byng presented the to the , which, to this day, recognises sportsmanship and excellence in play.

Lord and Lady Byng also travelled more than any of their predecessors, making extended trips to Western Canada and the North, taking the opportunity to meet with many Canadians. Lord Byng established the at the in , and Lady Byng created a rock garden at , which still delights visitors today.

The most notable issue during Lord Byng's term of office was the "King-Byng Affair", a political crisis that arose between the Governor General and Prime Minister . It was watched closely by both the Canadian and British governments, and led directly to the redefinition of the role of Governor General, the , and the .

Following his term as Governor General, Lord and Lady Byng returned to England, where he was created 1st in January 1928. [LondonGazette |issue=33348 |date= |startpage=366] He served as from November 1928 [LondonGazette |issue=33437 |date= |startpage=7302] to September 1931, instituting many reforms and reorganising the force. He introduced a system of promotion based on merit rather than length of service, improved discipline, retired inefficient senior officers, abolished the regularity of policemen's beats (which had allowed criminals to work out the system), introduced es, greatly extended the use of s, and established a central radio control room. He was promoted to the rank of in July 1932, [LondonGazette |issue=33872 |date= |startpage=6416] finally retiring with his wife to Thorpe Hall, where he died suddenly of an abdominal blockage in 1935. Lady Byng returned to Canada during to live with friends and died there in 1949.