Johannes Ockeghem (also Jean de, Jan; surname Okeghem, Ogkegum, Okchem, Hocquegam, Ockegham; other variant spellings are also encountered) (1410–1425, Saint-Ghislain, Belgium – February 6,[1] 1497, Tours, France) was the most famous composer of the Franco-Flemish School in the last half of the 15th century, and is often considered the most influential composer between Dufay and Josquin des Prez. In addition to being a renowned composer, he was also an honored singer, choirmaster, and teacher.

The spelling of Ockeghem's name comes from a supposed autograph of his which survived as late as 1885, and as reported by E. Giraudet, a historian in Tours; the document has since been lost. In 15th century sources, the spelling "Okeghem" predominates.

The birthdate of Ockeghem is unknown; dates as early as 1410, and as late as 1430 have been proposed.[2] The earlier date is based on the possibility that he knew Binchois in Hainaut before the older composer moved from Mons to Lille in 1423.[1] Ockeghem would have to have been younger than 15 at the time. This particular speculation derives from Ockeghem's reference, in the lament he wrote on the death of Binchois in 1460, to a chanson by Binchois dated to that time.[3] In this lament Ockeghem not only honored the older composer by imitating his style, but also revealed some useful biographical information about him.[4] The comment by the poet Guillaume Crétin, in the lament he wrote on Ockeghem's death in 1497, "it was a great shame that a composer of his talents should die before 100 years old", is also often taken as evidence for the earlier birthdate for Ockeghem.

In 1993, documents dating from 1607 were found stating that "Jan Hocquegam" was a native of Saint-Ghislain in the County of Hainaut, which was confirmed by references in 16th century documents.[5] This suggests that, though he first appears in records in Flanders, he was a native speaker of Picard.[6] Previously, most biographies surmised that he was born in East Flanders, either in the town after which he was named (present-day Okegem, from which his ancestors must have come) or in the neighboring town of Dendermonde, where the surname Ockeghem occurred in the 14th and 15th century.[7] Occasionally, Bavay, now in Nord department in France, was suggested as his birthplace as well.[8]

Details of his early life are lacking. Like many composers in this period, he started his musical career as a chorister, although the exact location of his education is unknown: Mons, a town near Saint-Ghislain that had at least two churches with competent music schools, has been suggested.[3] The first actual documented record of Ockeghem is from the Onze-Lieve-Vrouwe cathedral in Antwerp, where he was employed in June 1443 as a "left-hand choir singer ("left-handers" sang composed music, "right-handers" sang chant). He probably sang under the direction of Johannes Pullois, whose employment also dates from that year.[9] This church was a distinguished establishment, and it was likely here that Ockeghem became familiar with the English compositional style, which influenced late 15th-century musical practice on the continent.[1]

Between 1446 and 1448 Ockeghem served Charles I, Duke of Bourbon, at his court in Moulins, now in central France.[1] During this service he became the first among the singing chaplains to appear in the court records.[1] Around 1452 he moved to Paris where he served as maestro di cappella to the French court, as well as treasurer of the Abbey of St. Martin-de-Tours[1] at Tours.[1] In addition to serving at the French court – both for Charles VII and Louis XI[1] – he held posts at Notre Dame de Paris and at St. Benoît. He is known to have traveled to Spain in 1470, as part of a diplomatic mission for the King, which was a complex affair attempting both to dissuade Spain from joining an alliance with England and Burgundy against France, and to arrange a marriage between Isabella I of Castile and Charles, Duke of Guyenne (the brother of king Louis XI).[3] After the death of Louis XI (1483), not much is known for certain about Ockeghem's whereabouts, though it is known that he went to Bruges and Tours, and he probably died in the latter town since he left a will there. An indication of the renown in which Ockeghem was held is the number of laments written on his death in 1497; among the most famous of the musical settings of these many poems is Nymphes des bois by Josquin des Prez.[3]

Ockeghem probably studied with Gilles Binchois, and at least was closely associated with him at the Burgundian court. Since Antoine Busnois wrote a motet in honor of Ockeghem sometime before 1467, it is probable that those two were acquainted as well; and writers of the time often link Dufay, Busnois and Ockeghem. Although Ockeghem's musical style differs considerably from that of the older generation, it is probable that he acquired his basic technique from them, and as such can be seen as a direct link from the Burgundian style to the next generation of Netherlanders, such as Obrecht and Josquin. 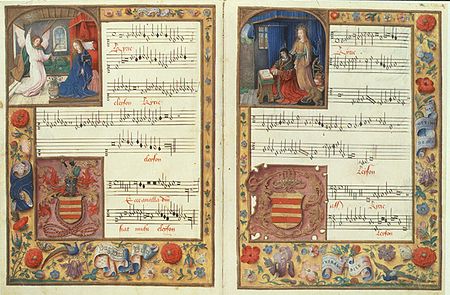 Ockeghem was not a prolific composer, given the length of his career and extent of his reputation, and some of his work was lost. Many works formerly attributed to Ockeghem are now presumed to be by other composers; Ockeghem's total output of reliably attributed compositions, as with many of the most famous composers of the time (such as Josquin), has shrunk with time.[3] Surviving reliably-attributed works include some 14 masses (including a Requiem mass), an isolated Credo (Credo sine nomine), 5 motets, a motet-chanson (a deploration on the death of Binchois), and 21 chansons.[1] Thirteen of Ockeghem's masses are preserved in the Chigi codex, a Flemish manuscript ca. 1500.[10] His Missa pro Defunctis is the earliest surviving polyphonic Requiem mass (a setting by Dufay, possibly earlier, has been lost). Some of his works, alongside compositions by his contemporaries, are included in Petrucci's Harmonice musices odhecaton (1501), the first collection of music to be published using moveable type.[11]

Dating Ockeghem's works is controversial, as there are almost no external references allowing precise dating, excepting of course the death of Binchois (1460) for which Ockeghem composed a motet-chanson. The Missa Caput is almost certainly an early work, since it follows on an anonymous English mass of the same title dated to the 1440s, and his late masses may include the Missa Ma maistresse and Missa Fors seulement, in view of both his innovative treatment of the cantus firmus, and his tendency to write more and more homogeneous textures later in his life.[3]

Ockeghem used the cantus firmus technique in about half of his masses; the earliest of these masses use head-motifs at the start of the individual movements, a practice which was common around 1440 but which was archaic after around mid-century.[3] Two of his masses, Missa Ma maistresse and Missa Fors seulement, are based on chansons he wrote himself, and use more than one voice of the chanson, foreshadowing the parody mass techniques of the 16th century. In his remaining masses, including the Missa Mi-mi, Missa cuiusvis toni, and Missa prolationum, no borrowed material has been found, and the works seem to have been freely composed.[3][12]

Ockeghem would sometimes place borrowed material in the lowest voice, such as in the Missa Caput, one of three masses written in the mid-15th century based on that fragment of chant from the English Sarum Rite.[3] Other characteristics of Ockeghem's compositional technique include his liking for varying the rhythmic shape of voices, so as to maintain their independence.[1]

A strong influence on Josquin des Prez and the subsequent generation of Netherlanders, Ockeghem was famous throughout Europe for his expressive music, although he was equally renowned for his technical prowess.[4] Two of the most famous contrapuntal achievements of the 15th century include the astonishing Missa prolationum, which consists entirely of mensuration canons, and the 'Missa cuiusvis toni', designed to be performed in any of the different modes, but even these technique-oriented masterpieces demonstrate his insightful use of vocal ranges and uniquely expressive tonal language.[13] Being a renowned bass singer himself, his use of wide-ranging and rhythmically active bass lines sets him apart from many of the other composers in the Netherlandish Schools.

To commemorate his death, Josquin des Prez composed the motet La déploration de la mort de Johannes Ockeghem, a setting of the poem Nymphes des bois by Jean Molinet. An unusually large number of laments appeared after the death of this great composer. Some of the authors of these poems included Jean Molinet and Desiderius Erasmus; Johannes Lupi provided another musical setting.[13]