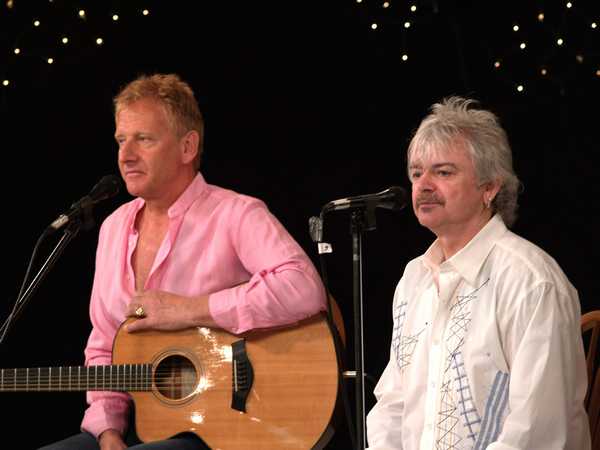 The two met in May 1975 while performing in the Australian production of the / musical, "". Later that year, the duo, along with Chrissie Hammond and two others, formed Air Supply as a five-man group. Hammond left the band and was replaced by Jeremy Paul in time for the group's first Australian hit single, "Love and Other Bruises." It was followed by a self titled debut album that reached gold in Australia, which featured keyboardist/arranger Adrian Scott, drummer Jeff Browne, and guitarist Mark McEntee. Singles during this period included "Empty Pages" and "Do What You Do." The group was invited to open for during his tour of Australia; he was so impressed with their performance that he invited them to be the opening act during his tour of the . During this tour, Jeremy Paul left the band. (He later played with the original lineup of the , led by Chrissie Amphlett and Mark McEntee.)

Eager to prove that they could still succeed as a duo, the group released the album "", which included re-recordings of many of their earlier hits. Although their music met with some success, Graham Russell on the 1995 recalls that he and Hitchcock were so poor that they were reduced to checking the backs of hotel sofas for change so that they could buy bread to make toast.

Hitchcock and Russell started out fresh again in 1978, and the band that was to record almost all of the hit records was formed. It featured (arranger and ), David Moyse, and Rex Goh (s) as well as the rhythm section of David Green (bass) and Ralph Cooper (drums).

In 1979, the band released "Life Support", a that included a picture disc on its first printing. Produced by Charles Fisher, it was recorded in the tiny Trafalgar Studios in where, as Graham recalls on the 2005 DVD, he had half an inch between the end of his guitar and the studio wall. It was on this album that a five-and-a-half minute version of "Lost in Love" was introduced to Australian audiences. Written by Russell in fifteen minutes, the song caught the attention of music mogul , and his record label, Arista, remixed the song and released it as a single in the United States.

Their 1980 album, "Lost in Love", contained three U.S. Top Five singles, including the title track (a U.S. #3), plus "" (#5) and "" (#2) (). The album sold two million copies in the U.S. The following year they released "The One That You Love", and the title song was released as a single and went number #1 on the . It also featured two other Top 10 hits, "Here I Am" and "Sweet Dreams". A fourth single "I'll Never Get Enough", co-written by Jeanne Napoli, and Judy Quay, was released in and achieved Top 10 status. Their third album, in 1982, "Now And Forever", continued the group's popularity with the Top 10 hit, "" and two top 40 singles "Young Love" and "". In 1983, they released their "Greatest Hits" album with a new single called "" written by . The song was one of their biggest hits ever spending three weeks at number 2, and the album eventually sold 5 million copies.

In 1984, their song "I Can Wait Forever" was included (although barely audible) in a scene in the blockbuster movie , and was included on the soundtrack album.

Air Supply released their first live video, "Air Supply Live in Hawaii". In 1985, they had one semi-major Billboard hit with "Just As I Am" and a couple of minor hits. Russell and Hitchcock recorded a 1987 album before taking a break from studio recordings. During this time, Russell Hitchcock released his self-titled album in 1988 which was not a big seller. However, he did have the single "" in 1990 from the movie soundtrack for "Arachnophobia" which received significant airplay.

On August 21, 1989, using their old producer and welcoming the return of drummer Ralph Cooper, the duo decided to enter the studio again to record "The Earth Is", which was released in 1991 by under . The recording contains their hit single "Without You," along with singles for "Stronger Than the Night" (with a music video announcing that Air Supply was back) and "Stop the Tears." Inside the album is a note about Russell Hitchcock and Graham Russell's original Musical Director of their meeting place during "" (and long time Band Member/Orchestrator): "This Album is Dedicated to the Memory of Frank Esler-Smith."

The official fan club released "The Earth Is World Tour" video, a rare collector's item that contains live footage from the band's global tour in support of the album.

The album was followed by "The Vanishing Race" in 1993, which was supported by the hit single "Goodbye" produced by , (, the rock band Chicago, , and ), with lyrics written by a former girlfriend of (David Foster's current wife) Linda Thompson--which, although not popular in the United States, was critically praised and gained a large following outside the country, especially in Asia where in many countries they would reach number #1. This would lead to another world tour in 1993. "It's Never Too Late" was another single released from the "Vanishing Race". The album itself was dedicated to the plight of the American Indians, the "Vanishing Race" of the album's title.

Their third album of the decade, "News from Nowhere", was released in 1995. It contained the Asian hit singles "Someone", "Always", and a cover of "", a song made famous by of .

Their popularity continued to soar in Southeast Asian countries, culminating in the release of "Now and Forever: Greatest Hits Live", a CD and DVD recording of a live concert in , , also in 1995, which stayed at the top of the Chinese album charts for 16 weeks.

They continued to tour heavily throughout Asia and in select venues in the U.S. as well as record into the new millennium, releasing the more -titled "The Book of Love" (1997), "Yours Truly" (2001), and "Across the Concrete Sky" (2003). In 2005 they once again released a live CD/DVD recording; also in 2005 they performed in , , becoming one of the first foreign bands invited to perform in the country. They were booked to perform two concerts, and played the first show on July 7, the day before hit the country. In high winds their first concert had an audience of 175,000. Due to the hurricane they could not play the second show. Fans staying at the same hotel as Air Supply on July 8 had to be content with Graham performing acoustically for them, as there was no electricity.

In 2006 they released an acoustic album, "The Singer and the Song", and are gearing up for the release of their first studio album in three years, "Zed". In support of the acoustic album they made their first trip to in May 2006. December 2, 2006 saw the duo perform to a capacity crowd in . This was their second visit to Jamaica, having performed at the in January 2006. They also have been seen endorsing 's Classic Soft-Rock Collection. In 2007, Graham Russell released his first adult contemporary solo album called "The Future".

Graham Russell recently made an appearance in "Believe", a comedy about .

*In 1980, shortly after the original version of "Lost In Love" was released, included it as a duet with on his hit album "Man of the World".
*In 1987, American singer went to #26 on the with a recording of "The Power of Love"
*In 1994 Celine Dion recorded "The Power of Love" for her album À l'Olympia.
*In 1998, Air Supply's hit single "Lost In Love" was recorded by dance/pop group . It reached #1 in New Zealand, which was a higher position than Air Supply's original in that country, although it failed to obtain the same popularity overseas.
*In 1999, it was remixed by Grammy Award-winning producer and released internationally on Deep Obsession's debut album "Infinity".
*In 2003, R&B group recorded the Air Supply single "".
*In 2005, performed "" during the fourth season of .
*In 2005, Air Supply's single 'Goodbye' was recorded on Janice Wei's album 'My Love'
*In 2006, , the internationally popular Irish vocal pop group, recorded "", a duet with in the band's latest album, "The Love Album", which debuted at #1 in the UK charts. Another version of the song was covered by Philippine actor .
*In 2006, English singer recorded "" on his album, "Thank You"
*In 2007, actor recorded "" on his album, "Another Side".
*In 2008, keyboardist Carrigan Chantz recorded "Late Again" on his self-titled debut.