A libation is a ritual pouring of a liquid as an offering to a god or spirit or in memory of those who have died. It was common in many religions of antiquity and continues to be offered in various cultures today.

Various substances have been used for libations, most commonly wine or olive oil, and in India, ghee. The vessels used in the ritual, including the patera, often had a significant form which differentiated them from secular vessels. The liquid was poured onto something of religious significance. The libation was often poured on the ground itself, as an offering to the Earth.

Libations were part of ancient Judaism and are mentioned in the Bible:

"And Jacob set up a Pillar in the place where he had spoken with him, a Pillar of Stone; and he poured out a drink offering on it, and poured oil on it". (Genesis 35:14)

Isaiah uses libation as a metaphor when describing the end of the Suffering Servant figure who: "poured out his life unto death". (53:12)

In Ancient Greece the term "spondee" (libation) is meant to be a type of sacrifice. The term includes all offers to the gods, which discharge on to an altar various nutritious or precious liquids, such as perfumes, wine, honey, milk, oil, juices of fruits.

Ancient Greek texts often mention libations. Euripides describes the dire consequences of failure to include certain gods in libations in The Bacchae, a theme common to many Greek tragedies. The use of a libation composed of barley, wine, honey and water to summon shades in Hades is also referred to in the Odyssey.

In his Pneumatica, Hero of Alexandria described a mechanism for automating the process by using altar fires to force oil from the cups of two statues.

In Shinto, the practice of libation and the drink offered is called Miki (神酒), lit. "The Liquor of the Gods". At a ceremony at a Shinto shrine, it is usually done with sake, but at a household shrine, one may substitute fresh water which can be changed every morning. It is served in a white porcelain or metal cup without any decoration. 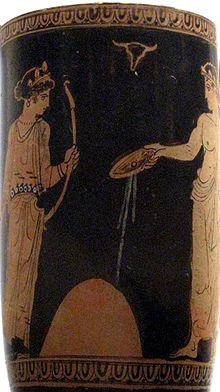 Artemis and Apollo at omphalos (libation)

In the Quechua and Aymara cultures of the South American Andes, it is common to pour a small amount of one's beverage on the ground before drinking as an offering to the Pachamama, or Mother Earth. This especially holds true when drinking Chicha, an alcoholic beverage unique to this part of the world. The libation ritual is commonly called challa and is performed quite often, usually before meals and during celebrations.

In certain African cultures, the ritual of pouring libation is an essential ceremonial tradition and a way of giving homage to the ancestors. Ancestors are not only respected in such cultures, but also invited to participate in all public functions (as are also the gods). A prayer is offered in the form of libations, calling the ancestors to attend. The ritual is generally performed by an elder. Although water may be used, the drink is typically some traditional wine (e.g. palm wine), and the libation ritual is accompanied by an invitation (and invocation) to the ancestors and gods.

Libation is also commonly recognized as the break within the famous performance of Agbekor, a ritual dance performed in some West African cultures.

Shamanism shows great diversity,[1] even if we consider only shamanism among Siberian peoples. Among several peoples near the Altai Mountains, the new drum of a shaman must go through a special ritual. This is regarded as “enlivening the drum”: the tree and the deer who gave their wood and skin for the new drum narrate their whole lives and promise to the shaman that they will serve him. The ritual itself is a libation: beer is poured onto the skin and wood of the drum, and these materials “come to life” and speak with the voice of the shaman in the name of the tree and the deer. Among the Tubalar, moreover, the shaman imitates the voice of the animal, and its behaviour as well.[2]

The Celts (at least the Druids of Britain) also used libations as offerings to their gods.

In Cuba a widespread custom is to spill a drop or two of rum from one's glass while saying "para los santos" (for the Saints).[3]

In Russia and surrounding countries it is an old tradition to pour vodka onto the grave of the deceased.

In the contemporary United States, there is a tradition of pouring libations of malt liquor from a forty before drinking, which is particularly associated with African American rappers. This is referred to as "tipping" to one's (dead) homies (friends),[4] or "pouring one out".[5] This is referenced in various songs, such as the 1993 "Gangsta Lean (This Is For My Homies)" by DRS ("I tip my 40 to your memory"), and sometimes accompanied by ritual expressions such as "One for me, and one for my homies." This is occasionally parodied, as in Austin Powers: The Spy Who Shagged Me (1999).[6]

In Burmese Buddhism, the water libation ceremony, called (yay zet cha), which involves the ceremonial pouring of water from a glass into a vase, drop by drop, concludes most Buddhist ceremonies including donation celebrations and feasts. This ceremonial libation is done to share the accrued merit with all other living beings in all 31 planes of existence.[7] While the water is poured, a confession of faith, called the hsu taung imaya dhammanu, is recited and led by the monks.[8] Then, the merit is distributed by the donors, called ahmya wei by saying Ahmya ahmya ahmya yu daw mu gya ba gon law three times, with the audience responding thadu, Pali for "well done." The earth goddess Vasudhara is invoked to witness these meritorious deeds.[8] Afterward, the libated water is poured on soil outside, to return the water to Vasudhara.

Prior to colonial rule, the water libation ceremony was also performed during the crowning of Burmese kings, as part of procedures written in the Raza Thewaka Dipani Kyan , a 1849 text that outlines proper conduct of Burmese kings.[9][10]

Although the offering of water to Vasudhara may have pre-Buddhist roots, this ceremony is believed to have been started by King Bimbisara, who poured the libation of water, to share his merit with his ancestors.[11][12]