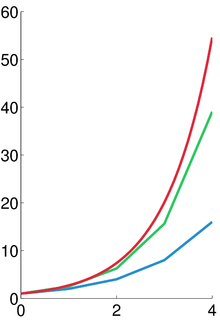 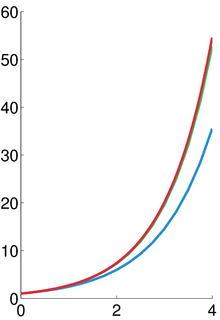 The same illustration for h = 0.25. It is seen that the midpoint method converges faster than the Euler method.

Many differential equations cannot be solved analytically; however, in science and engineering, a numeric approximation to the solution is often good enough to solve a problem. The algorithms studied here can be used to compute such an approximation. An alternative method is to use techniques from calculus to obtain a series expansion of the solution.

We want to approximate the solution of the differential equation

The above formulation is called an initial value problem (IVP). The Picard–Lindelöf theorem states that there is a unique solution, if f is Lipschitz continuous. In contrast, boundary value problems (BVPs) specify (components of) the solution y at more than one point. Different methods need to be used to solve BVPs, for example the shooting method (and its variants) or global methods like finite differences, Galerkin methods, or collocation methods.

Three elementary methods are discussed to give the reader a feeling for the subject. After that, pointers are provided to other methods (which are generally more accurate and efficient). The methods mentioned here are analysed in the next section.

For more details on this topic, see Euler method.

A brief explanation: From any point on a curve, you can find an approximation of a nearby point on the curve by moving a short distance along a line tangent to the curve.

Rigorous development: Starting with the differential equation (1), we replace the derivative y' by the finite difference approximation

which when re-arranged yields the following formula

This formula is usually applied in the following way. We choose a step size h, and we construct the sequence t0, t1 = t0 + h, t2 = t0 + 2h, … We denote by yn a numerical estimate of the exact solution y(tn). Motivated by (3), we compute these estimates by the following recursive scheme

The Euler method is an example of an explicit method. This means that the new value yn+1 is defined in terms of things that are already known, like yn.

If, instead of (2), we use the approximation

we get the backward Euler method:

The backward Euler method is an implicit method, meaning that we have to solve an equation to find yn+1. One often uses fixed point iteration or (some modification of) the Newton–Raphson method to achieve this. Of course, it costs time to solve this equation; this cost must be taken into consideration when one selects the method to use. The advantage of implicit methods such as (6) is that they are usually more stable for solving a stiff equation, meaning that a larger step size h can be used.

If the differential equation is of the form

then an approximate explicit solution can be given by

The Euler method is often not accurate enough. In more precise terms, it only has order one (the concept of order is explained below). This caused mathematicians to look for higher-order methods.

One possibility is to use not only the previously computed value yn to determine yn+1, but to make the solution depend on more past values. This yields a so-called multistep method. Perhaps the simplest is the Leapfrog method which is second order and (roughly speaking) relies on two time values.

Another possibility is to use more points in the interval [tn,tn+1]. This leads to the family of Runge–Kutta methods, named after Carl Runge and Martin Kutta. One of their fourth-order methods is especially popular.

A good implementation of one of these methods for solving an ODE entails more than the time-stepping formula.

It is often inefficient to use the same step size all the time, so variable step-size methods have been developed. Usually, the step size is chosen such that the (local) error per step is below some tolerance level. This means that the methods must also compute an error indicator, an estimate of the local error.

Other desirable features include:

Many methods do not fall within the framework discussed here. Some classes of alternative methods are:

Numerical analysis is not only the design of numerical methods, but also their analysis. Three central concepts in this analysis are:

A numerical method is said to be convergent if the numerical solution approaches the exact solution as the step size h goes to 0. More precisely, we require that for every ODE (1) with a Lipschitz function f and every t* > 0,

All the methods mentioned above are convergent. In fact, convergence is a condition sine qua non for any numerical scheme.

Suppose the numerical method is

The local error of the method is the error committed by one step of the method. That is, it is the difference between the result given by the method, assuming that no error was made in earlier steps, and the exact solution:

The method is said to be consistent if

The method has order p if

Hence a method is consistent if it has an order greater than 0. The (forward) Euler method (4) and the backward Euler method (6) introduced above both have order 1, so they are consistent. Most methods being used in practice attain higher order. Consistency is a necessary condition for convergence, but not sufficient; for a method to be convergent, it must be both consistent and zero-stable.

For some differential equations, application of standard methods—such as the Euler method, explicit Runge–Kutta methods, or multistep methods (e.g., Adams–Bashforth methods)—exhibit instability in the solutions, though other methods may produce stable solutions. This "difficult behaviour" in the equation (which may not necessarily be complex itself) is described as stiffness, and is often caused by the presence of different time scales in the underlying problem. Stiff problems are ubiquitous in chemical kinetics, control theory, solid mechanics, weather forecasting, biology, plasma physics, and electronics.

Below is a timeline of some important developments in this field.