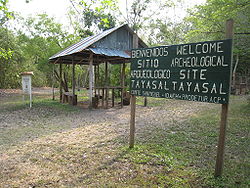 Entrance to the Tayasal archaeological site

Tayasal is a pre-Columbian Maya archaeological site that dates to the Postclassic period. The site is located in the southern Maya lowlands on a small island in Lake Petén Itzá, now part of the Department of Petén in northern Guatemala. Tayasal was the capital of one of the last independent Maya polities to be subdued by the Spanish conquistadores and colonizers, which, along with Zacpeten (the capital of the Ko'woj Maya) and other towns in the Lake Petén Itza region such as Quexil (Maya: Ek'ixil) and Yalain, occurred in 1697.

As an archaeological site it has been almost completely compromised by the destruction and rebuilding undertaken on the island by the Spanish after its fall. The capital city of the modern Petén department, Flores, has been built over the island and the nearby shores of the lake.

The Itza left the Yucatán region in the 13th century and built the city later known as Tayasal as their capital. They called it Noh Petén, or literally "City Island". It was also called Tah Itzá, or Place of the Itzá.

It was here on the island of Flores on the shore of Lake Petén Itzá that the last independent state of the Maya civilization held out against the onslaught of the Spanish conquerors. In 1541, Hernán Cortés came to the island, on route to Honduras, but needed to move on and did not try to conquer it, due to its excellent defensive position.

The Spanish began the first of several attempts to conquer the island in 1629, but did not succeed until 1697 under an expedition led by Martín de Ursúa attacked via boats and destroyed it. Those who could fled and many Itzá people hid in the jungle for years. From the structures of Noh Petén, were constructed the Roman Catholic Church and municipal buildings in the city of Flores.