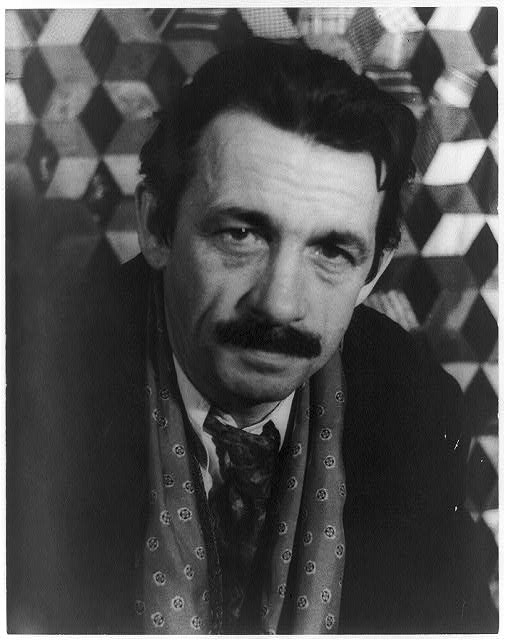 Thomas Hart Benton (, - , ) was an American painter and . Along with and , he was at the forefront of the Regionalist art movement. His fluid, almost sculpted paintings showed everyday scenes of life in the United States. Though his work is perhaps best associated with the Midwest, he created scores of paintings of New York - where he lived for over 20 years, - where he summered for much of his adult life, the American South and the American West.

Benton was born in Neosho, , into an influential clan of politicians and powerbrokers. Benton's father was a lawyer and United States congressman, and his namesake and great-uncle Thomas Hart Benton was one of the first two s from Missouri.

Benton spent his childhood shuttling between and Missouri. Benton rebelled against his grooming for a future political career, preferring to develop his interest in art. As a teenager, he worked as a cartoonist for the "Joplin American" newspaper, in .

In 1907 Benton enrolled at the , but left for , in 1909 to continue his art education at the . In Paris, Benton met other n artists such as and , an advocate of . Wright's influence gave a strong Synchromist leaning to Benton's work.

Benton returned to New York City in 1913 and continued painting. His work as a draftsman in the in 1919 changed his style significantly. His artwork during his navy stint concentrated on realistic sketches and drawings of shipyard work and life&mdash;a change of focus that would continue throughout Benton's career.

On return to New York in the early 1920s, Benton declared himself an "enemy of modernism" and began the naturalistic and representational work today known as Regionalism. Benton was active in politics. He expanded the scale of his Regionalist works, culminating in his "America Today" murals at the in 1930-31. He was heavily influenced by .

In 1932 Benton broke through to the mainstream. A relative unknown, he was chosen to produce the murals of life that would become that state's contribution to the 1933 Exhibition in . The "Indiana Murals" stirred controversy; Benton painted everyday people but did not sugarcoat the state’s history, and many criticized the work for including members in full regalia. The mural panels are currently displayed at in Bloomington with the majority on display in the "Hall of Murals" at Indiana University Auditorium. Four additional panels are displayed in the former University Theatre which is connected to the Auditorium. The final two panels, including the most controversial panel, with images of the Ku Klux Klan, are located in a lecture classroom at Woodburn Hall.

On December 24, 1934, Benton was featured on the first color cover of "Time" magazine. Benton’s work was featured along with fellow Midwesterners and in an article titled “The U.S. Scene”. The article portrayed the trio as the new heroes of American art and cemented Regionalism as a significant art movement.

In 1935 Benton left the heated artistic debates of New York for Missouri, where Benton had agreed to create a mural for the in Jefferson City. A "Social History of Missouri" is perhaps Benton’s greatest work. But it, like his previous murals, caused controversy with its focus on subjects like Missouri outlaw , slavery, and political boss . Benton used his return to Missouri to embrace the Regionalist art movement. He settled in and accepted a teaching job at the . Kansas City afforded Benton greater access to the rural America then disappearing. Benton's sympathy was with the working class and the small farmer, unable to gain material advantage despite the . His works often show the melancholy, desperation and beauty of small-town life. In the late 1930’s, he created some of his best known work, including the iconic allegorical nude Persephone, which famously hung in Billy Rose’s nightclub, the Diamond Horseshoe. In 1937, he published his critically acclaimed autobiography, "An Artist in America", which was praised by : “Here’s a rare thing, a painter who can write.” During this period, Benton also began to produce signed, limited edition lithographs that were made available to the public at $5.00 each through the Galleries.

Benton taught at the from 1926 to 1935 and at the from 1935 to 1941. His most famous student, , whom he mentored in the Art Students League, would go on to found the Abstract Expressionist movement&mdash;wildly different from Benton's own style. Jackson Pollock often said that Benton's traditional teachings gave him something to rebel against. However, art scholars have recognized the Pollock’s organizational principles continued to follow Benton’s teachings even after his move away from realism, with forms composed around a central vertical pole with each form counterbalanced by an equal and opposite form.

Benton's students in New York and Kansas City included many painters who would make significant contributions to American art. Among the dozens of other artists Benton impacted as a teacher were Pollock’s brother , , , , , , , , , , , , , , , , and . [Under the Influence: The Students of Thomas Hart Benton. Marianne Berardi. The Albrecht-Kemper Museum of Art. 1993.]

In 1941, Benton was dismissed from the Art Institute after calling the typical "a graveyard run by a pretty boy with delicate wrists and a swing in his gait" with further disparaging references to, as he claimed, the excessive influence of homosexuals in the art world. [ cite news | date=1941-04-14 | publisher=Time | title=Benton Hates Museums | url=http://www.time.com/time/magazine/article/0,9171,932248,00.html | accessdate=2007-07-29]

During World War II, Benton created a widely distributed series titled The Year of Peril, which brought into focus the threat to American ideals by fascism and Nazism. Following the war, Regionalism fell from favor, eclipsed by the rise of . [ cite web | url=http://www.nbmaa.org/Online_Exhibitions/Benton/html/Benlife.html | publisher=New Britain Museum of American Art | title=Thomas Hart Benton Biography | accessdate=2007-07-29] Benton remained active for another 30 years, but his work focused less on social commentary and more on creating stylized bucolic images of pre-industrial farmlands. He also painted a number of murals, including "Lincoln" (1953) at Lincoln University in Jefferson City, "Trading At Westport Landing" (1956) at The River Club in Kansas City, "Father Hennepin at Niagara Falls" (1961) for the Power Authority of the State of New York, "Turn of the Century, Joplin" (1972) in , and "Independence and the Opening of The West" at the in . His work on the Truman Library mural initiated a friendship with the former U.S. President that lasted for the rest of their lives. Benton died in 1975 at work in his studio, just as he completed his final mural, "The Sources of Country Music" for the in .

Benton met and married Rita Piacenza, an Italian immigrant, in . They met while Benton was teaching art classes for a neighborhood organization in New York City and she was one of his students. They were married for 53 years until Thomas's death in 1975. Rita passed away ten weeks after her husband. The couple had a son Thomas Piacenza Benton born and a daughter Jessie Benton born .