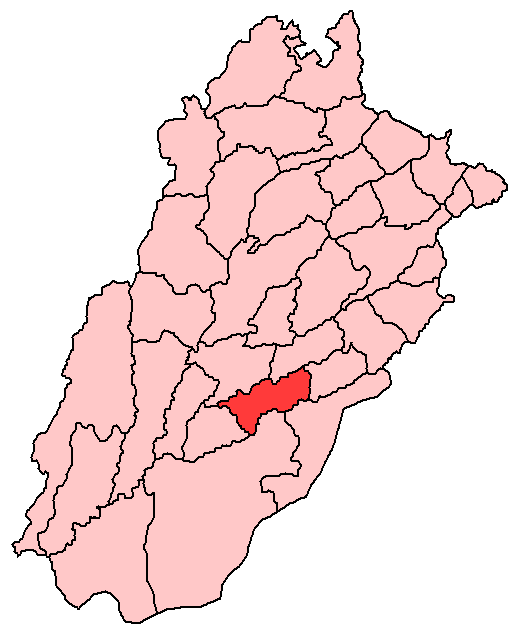 Vehari District (: وہاڑی) is a district in the Punjab province of - the city of is the capital of the district.

Vehari District is the result of construction of the canal from Sulemanki Head Works on the and the institution of Nili Bar project in , so called because of the hints of blue in the water of the Sutlej. The ancient history of the district is obscure. The populated areas in ancient times was restricted to the banks of the river Sutlej where seasonal inundation permitted some . The rest of the area was a vast sandy scrap-land at best affording pastures itinerant herdsmen. The tract formed the state of Fatehpur during the time of Akbar the Great. This was ruled by Fateh Khan of Joya family who founded and gave his name to the town of Fatehpur. Fatehpur is still in existence about 15 kilometres to the south of Mailsi and is the oldest town of Mailsi subdivision. It has some remains of archaeological value.

Subsequently, areas to the east of the above mentioned riparian tract were inhabited by Rain from Lahore and Khichhis from Bakaner who founded Mailsi town. Mailsi is still much their preserve.

After the Arian and Khichhi, Daultana s and Khakwani Pathans appear on the Vehari scene towards the end of the 19th century. The Khakwanis came here as huge landowners and are still probably the largest single family that owns the highest amount of lands. They had come to Multan from Khugyani District in , when their Sardar Nawab Ali Muhammad Khan was made the of Multan after the city came under the rule of the Afghans. Vehari being a part of Multan at that point came under their rule and they bought and cultivated lands here. A large number of irrigation canals were built under their rule, which to this day are better for cultivation than any other effort made by any subsequent government. The people of Vehari owe a great deal of this to the Khakwani Pathan Nawabs of Multan. Being very wealthy landowners they hardly indulged in local politics and were pretty much considered the Sardars of the area, but recently some of its members have joined politics to help the plight of the poor people. Daultana is a sub cast of s. After independence war of these two groups brought a large tract of land under cultivation by constructing inundation canal from the Sutlej river. The most notable of which were Ghulam Wah and Haji Wah. There is an oldest village called Peer Shah near Karam Pur whose tehsil is Mailsi in this district. This is the village of Saddats (Sayyeds).

The district is located between coord|29|36|N|71|44|E and coord|30|22|N|72|53|E and borders with Bahawalnagar and Bahawalpur on the southern side, with Pakpattan on the eastern, with Khanewal and Lodhran on western and with Sahiwal and Khanewal on northern side. The total area of the district is 4,364 square kilometres. It is about 93 kilometres length and approximately 47 kilometres in breadth and it is sloping gently from northeast to southwest.

The district of Vehari is administratively subdivided into three s these are:

The district consists of plain area with fertile land. It is a part of Indus plain. It has the best cultivated land which is suitable for cotton, wheat and other agricultural crops. Vehari district lies Nili Bar which is between Ravi and Bias and Sutlej rivers. Its land is irrigated with the fertile water of Chenab and Ravi rivers. Vehari district has a big canal system with two canals namely Pakpatan and Mailsi canal. The total number of canals including their minors in the district are 19 with a total length of about 1,380...

The Bias River, or , is known locally as the Viyah. The old bed of the river is known as Sukh Bias. During heavy floods nominal water flow into the . The stream enters Vehari district near Sheikh Fazal and joins Satluj River via Pakhi More and Pul. The path of the nullah has changed over the years; it currently joins Satluj River via .

It has best education facilities with different schools and colleges. is working under the management of District Government, Vehari. is also working efficiently and is named as the best primary educational institute of the city. There are also separate degree colleges for boys and girls. also has a campus located in this city of cotton. Recently, has opened its campus at Vehari which is one of the best Universities in Pakistan ranked by HEC. The level of education is very high in the city famous for cotton crops.

The climate of the district is hot and dry. The summer season starts from April and continues until October. May, June, and July are the hottest months. The mean maximum and minimum temperatures for these months are about 47 and 28 degrees . Dry, hot, and dusty winds are common during summer. The winter season lasts from November to March. December, January and February are the coldest months. The mean maximum and minimum temperatures for this period are about 22 and 4 °C. Fog is very common during winter

Most of the area's rain falls during the season from July to September. During winter season there is very little rain, however, deluges and s can occur.