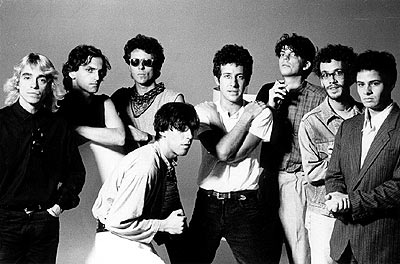 Most of the band members met at Colégio Equipe in at the end of the seventies and, after their first live performance at the school itself in 1981, the band began to perform live in several night clubs around the city. The first formation was: Arnaldo Antunes (vocals), Branco Mello (vocals), Marcello Fromer (guitar), Nando Reis (bass), Paulo Miklos (sax and vocals), Sergio Britto (keyboards and vocals), Tony Bellotto (guitar), Ciro Pessoa (vocals) and André Jung (drums). It was a pop/new wave-styled band, with a rather conventional sound and odd looks, with tender and little ball neckties. In 1984, without Ciro Pessoa, who left over a disagreement about Andre Jung's drumming skills, the band signed with the WEA label to record their first album, Titãs, produced by Pena Schimdt, and featuring songs previously recorded with Pessoas's vocals. Although poorly promoted and hardly a success, the band spawned their first hit: "", later recorded by singer .

In 1985, with Charles Gavin replacing André Jung on drums (the latter going on to ), their second album, "", produced by , was released with tighter arrangements than their debut album. Not only was the title track a great hit, the album was more heavily promoted than the first one and brought more opportunities to the group.

Up to the Spotlights

In November 1985, Tony Bellotto and Arnaldo Antunes were arrested for traffic and transportation. [ [http://www.titas.net/historia/ Titãs history at the official website] ] The episode made so much of an impact in the band, the next album, "", released in June 1986, contained a lot of tracks criticizing the public institutions ("Estado Violência" and "Polícia"), as well as other "pillars" of the Brazilian society and indeed society in general ("Igreja" and "Família"). The heavy and punk-influenced rhythms and the forceful lyrics, characteristic of the band in this phase, are fully represented in this album which is considered by the critics one of the best works of the group and one of the landmarks of the .

"", released at the end of 1987, continued in the same vein as the previous album in tracks like "Nome aos Bois","Lugar Nenhum" and "Desordem", however adding samplers in tracks like "Corações e Mentes", "Todo Mundo quer Amor", "Comida" and "Diversão". After some international performances, the band recorded some of their hits in live and released "" in 1988. The biggest hit to come out of Go Back was a live version of the song "Marvin" which is a re-invented version of "Patches" by Dicky Lee made famous by Elvis.

The producer Liminha (a former adjunct member of ) was always an important associate of the band since "Cabeça Dinossauro", and this association arrived to its climax in "", one of the most popular productions of the band by that time. Some of the prominence tracks: "Miséria", "Flores", "O Pulso" and "32 Dentes". One of the prominent features of this work was the special guest appearance of a couple of improvisors, called Mauro and Quitéria, discovered by the band in a beach in .

The band had arrived to a decisive point in its history and the next album, "" mark a strong yaw at the musicians' style, searching for heavier, alternative and authorial sound, along with lyrics. The members themselves produced the album and the work was possibly the final reason for to leave for a solo career. The following album, "", in 1993, continued the previous work in a way, with heavy instrumentation and aggressive lyrics, only now produced by , producer of important bands like Nirvana, which contributioned for the grunge-influenced sound.

In 1995 the band decided to take a break for one year during which many of its members decided to work solo or work with other bands (most notably Nando Reis), or to do different activities. Tony Bellotto, for example, wrote his first book.

By releasing "Domingo" at the end of 1995, the band definitively took up a pop sound, but its popularity only reached a second climax on the commemorative work, "" (MTV Unplugged), their most successful album, released in 1997, which sold 1,7 million copies. Recorded Live, MTV Acustico not only revisited their career up to that point but it also had a song which became an immediate hit named "Pra dizer Adeus".

This record was followed by "", modelled in the same way of their unplugged album, only recorded in studio.

The record of covers of others artists in "" wasn't very sucssesful (despite 's and ' charting) and the band decided to make another interval in 2000.

In Marcelo Fromer was rammed by a motorcycle in São Paulo [ [http://www1.folha.uol.com.br/folha/ilustrada/ult90u14401.shtml Folha Online - Marcelo Fromer, do Titãs, é atropelado em SP e está em estado grave] ] and died two days later of . [ [http://www1.folha.uol.com.br/folha/ilustrada/ult90u14464.shtml Folha Online - Exames clínicos comprovam morte cerebral do músico Marcelo Fromer] ] It was a hard stroke to the band, which started recording their new album the day after. "" was released at the end of 2001 and brought "" as the prominence song (aside of the title track) which could represent the moment lived by the band that, after losing Marcelo Fromer, saw the departure of Nando Reis, who currently leads a successful solo career with many singles prominent in Brazilian charts (including songs penned for other artists) fronting his own band "".

With the release of "" (How Are You?), at the end of 2003, the five remaining members continued to write the history of more than 20 years of the band. With self-help hits as "", questions on relevance remain on Titãs' side, which faced declining sales and the ageing of their fanbase.

In 2005, they released another MTV-branded album, only this time in a non-acoustic live performance. This album generated a new hit for the group, called "", that basically criticizes the hypocrisy and lack of care from politicians, thus bringing the band back to its roots. It was seen as another opportunistic stunt by Brazilian critics, as the song was released exactly when Lula's government was facing manifold accusations of corruption.

In 2007, the band started a tour, entitled "25 Anos de Rock" (25 Years of Rock), joining to celebrate the 25th of both bands, as well as the 25th anniversary of the rising of 1980s Brazilian rock bands. The two line-ups played together most of the time on the shows, presenting also some invited musicians, like , and . The concert in , which took place at , , was recorded and filmed. The resulting CD and DVD from the show were released five months after.

As of 2008, the band is working on a new studio album, and on a documentary of the 25 years of the band. The documentary will feature 90 minutes of images collected since the beginning of the band, including recording of albums, live performances, and more. [ [http://oglobo.globo.com/cultura/mat/2008/05/14/documentario_sobre_os_25_anos_dos_titas_resgata_historia_da_banda_em_imagens_ineditas-427380434.asp Documentário sobre os 25 anos dos Titãs resgata história da banda em imagens inéditas] ]