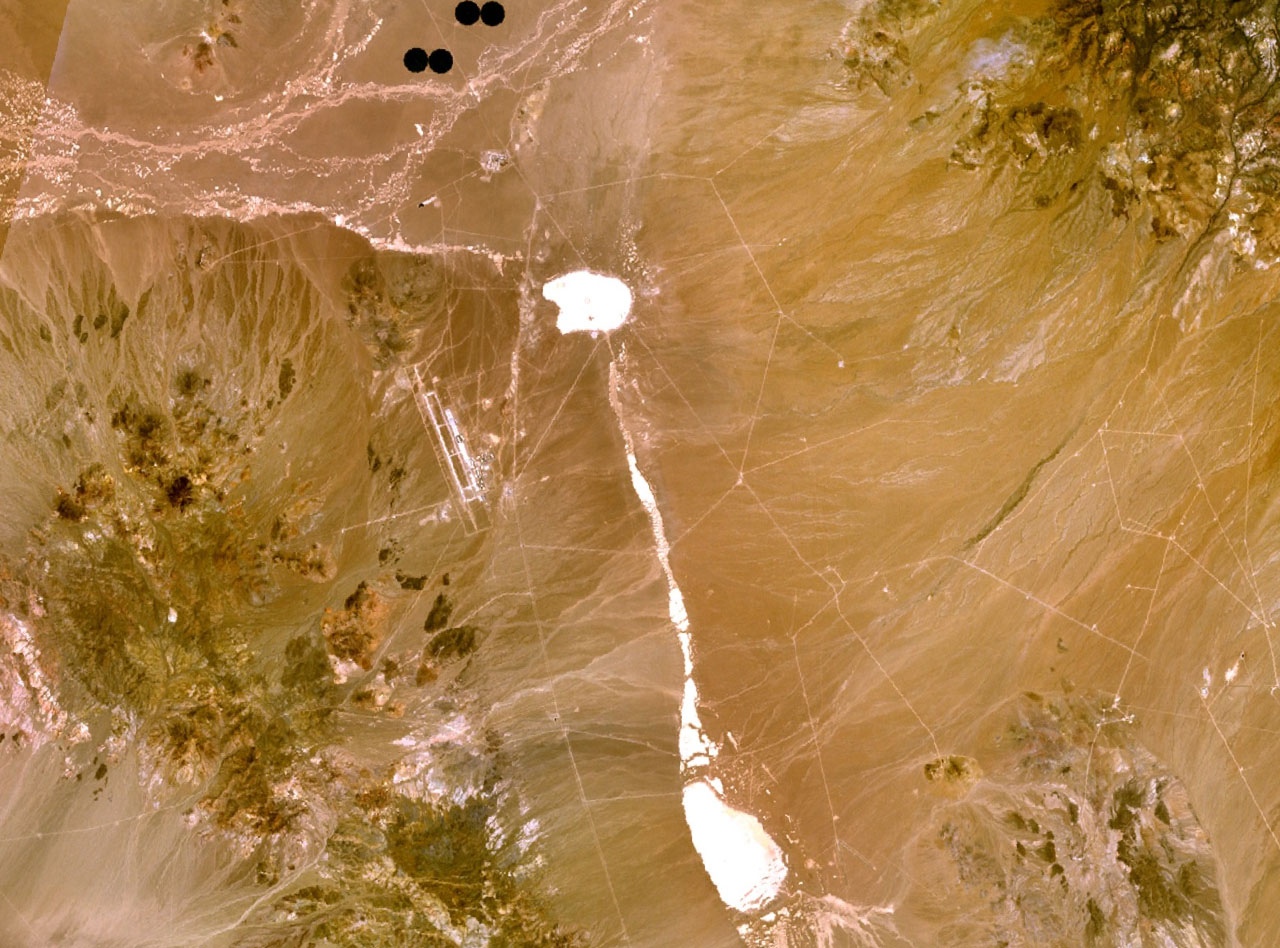 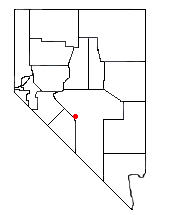 Although most U.S. airports use the same three-letter for the FAA and IATA, Tonopah Test Range is assigned TNX [ FAA-airport|ID=TNX|use=PR|own=MA|site=13138.1*A] by the FAA and XSD

Tonopah is owned by the USAF . The known primary use of this airport is to shuttle government employees to the test range from in Las Vegas.

The 1982 Airport Directory describes the Tonopah Test Range airfield as having a single 6,600' paved runway. In 1979, the length of Tonopah's runway was nearly doubled, to 12,000' (3.7 km) runway. In addition, the facility boasts over fifty hangars, and an extensive support infrastructure.

The primary (paved) access to the facility is off of at the north end of the airport. Dirt road access points also exist on the south and east sides of the range.

Tonopah Test Range Airport is currently plainly visible from commercial airliners, which pass 17 nm north of the base on transcontinental flights.

The Tonopah airfield was presumably originally built to support the AEC/DOE test programs, and only later was taken over by the military for flight testing. It was apparently not a era field, as it is not listed in the 1944 US Army/Navy Directory of Airfields. It was apparently built at some point between 1967 - 1970, as it was not depicted on the 1967 Mt. Whitney Sectional Chart.

The earliest depiction of the airfield which has been located was on the July 1970 Air Force Tactical Pilotage Chart.

Beginning in October 1979 Tonopah TR Airport was reconstructed and expanded. The convert|6000|ft|m|abbr=on runway was lengthened to convert|10000|ft|m|abbr=on Taxiways, a concrete apron, a large maintenance hangar, and a propane storage tank were added.

Phase II of the expansion consisted of the construction of an extra taxiway, a new control tower, a convert|42000|sqft|m2|sing=on hangar, a parts warehouse, a dining hall, a water storage tank, and extensive fuel storage tanks.

Phase III expansion of the facility was a convert|2000|ft|m|abbr=on runway extension to a total length of convert|12000|ft|m|abbr=on Extensions were made to taxiways, the ramp, the runway gained arrester gear, and new navigation aids were installed. More fuel storage was provided, together with Liquid Oxygen (LOX) storage, a fire station, and the first 24 aircraft hangars.

Extensive military construction began to turn the austere airstrip at Tonopah into a full fledged base with mainenance facilities, hangars, housing, etc. at a cost of over 100 million dollars.

On , , the last of the F-117s were returned to Tonopah to be mothballed. Since the aircraft still contain classified material, the Air Force was not able to mothball them in the normal facilities and will use hangers at Tonopah instead. One aircraft will be left in service at Nellis. [cite news |first=KEITH |last= ROGERS |authorlink= |coauthors= |title= Flying Into History |url= http://www.lvrj.com/news/18037079.html |work= |publisher= |date=2008-04-23 |accessdate=2008-04-25 ]

From 1977 to 1988, the 4477th Test and Evaluation Squadron (4477 TEF) was assigned to Tonopah. The mission of the squadron was project Constant Peg, the test and evaluation of captured figher aircraft. Over the course of its history the 4477th pilots flew three models of Soviet-designed MiGs.

Fishbeds were cone-nosed, supersonic fighters that were somewhat less maneuverable than MiG-17s. They also saw action with the North Vietnamese and became a popular export aircraft, with more than 8,000 produced.

Floggers were the MiG-21’s replacement. Their swing-wing was patterned on that of the F-111, but unlike their US antecedent, the MiG-23s were small and light enough to serve as dogfighters.

The 4477th developed realistic combat training operations featuring adversary tactics, dissimilar air combat training, and electronic warfare. Over the years more aircraft were acquired until they numbered about two dozen including ultra modern MiG-23s (designated YF-113s). was thought to turn over a number of un-needed MiGs but planes kept coming in from other sources as well. No less than three n pilots brought their MiGs to . A number of Chinese made MiGs were purchased outright from via the front company Combat Core Certification Professionals Company (CCCP!) and imported in crates. Three Syrians flew their MiG-23 and s to in 1988.

On the whole, the aircraft weren’t as capable as US models, say those who flew them. Their fit and finish were vastly inferior, characterized by such defects as protruding rivets.

All the models had quirks. The MiG-17 did not have an electric seat, so pilots had to use cushions to position themselves properly inside the cockpit. Both it and the MiG-21 had pneumatic brakes applied by squeezing a lever on the front of the stick. Many of the MiG-21s did not have steerable nose gears, making them difficult to taxi; the sign of a novice Fishbed pilot was the zigzag track he made while moving on the ground. If a pilot put the throttle back on a MiG-21, it would take a long time to spool up again when trying to accelerate. Thus many of those who flew it stayed on afterburners as much as possible. The MiG-23 did not have that problem, as it was designed for speed—but it was unstable and difficult to fly.

None of the Soviet-designed aircraft at Tonopah flew in bad weather or at night. All were very short-legged, compared to contemporary US aircraft, and sorties were limited to 20 minutes or so. The MiGs had US airspeed indicators and a few other minor instrument and safety modifications. Other than that, they were stock—down to their Warsaw Pact paint jobs.

The 4477th flew its last MiGs in 1990 and with the end of the Cold War was deactivated. In 2006, the Constant Peg program was declassified and the USAF held a series of press conferences about the former top secret US MiGs. It was revealed that the US MiGs flew more than 15,000 sorties and nearly 7,000 aircrew flew in training against dissimilar aggressors in the Nevada desert between 1980 and the end of the program in 1988.

The facility is legendary for serving as the home of the U.S. Air Force's stealth fighter fleet between 1982 and 1992. At Tonopah, the operational development of the F-117's was accomplished by the (4450th TG).

The first flight testing of the YF-117A began in June 1981 at . Although ideal for testing, the Groom Lake test site was not a suitable location for an operational base, so a new covert base had to be established.

Because of the tight restrictions on F-117A flights during the 4450th TG "black" era, a surrogate aircraft was needed for training and practice and to provide a cover story for the 4450th TG's existence. The aircraft chosen was the Ling-Temco-Vought (LTV) A-7 Corairs II. The SLUFF (Short Little Ugly Fat Fellow) was chosen because it demanded about the correct amount of pilot workload expected in the F-117A, was single seat, and therefore would bring all pilots to a common flight training base line.

In addition to providing an excuse for the 4450th's existence and activities the A-7's were also used to maintain pilot currency, particularly in the early stages when very few production F-117As were available. The pilots learned to fly chase on F-117A test and training flights, perform practice covert deployments, and practice any other purpose that could not be accomplished using F-117As, given the tight restrictions imposed on all F-117A operations.

There were approximately 20 aircraft, including a couple of A-7K trainers. The 4450th TG was the last active USAF unit to fly the A-7D.

A-7 flight operations began in June 1981 concurrent with the very first YF-117A flights. The A-7's wore a unique "LV" tailcode (for Las Vegas) and were based officially at . They were maintained by the 4450th Maintenance Squadron, based at Nellis. Some A-7s operated from Tonopah from the beginning, and care was taken to leave them outside the hangars, so that prowling satellites could see that Tonopah operated nothing more exciting than some Corsairs.

In January 1989, just three months after the USAF admitted the F-117A existed, the aging A-7's were replaced with newer T-38A and AT-38B Talon trainers.

Many of these "Talons" formerly belonged to the 4447th TS "Red Hats" that flew "acquired" Soviet aircraft at Groom Lake, Nevada. One of the AT-38B Talons even served as a USAF Thunderbird in the 1970s.

Most of the T-38s were reassigned to training units with the disbanding of the 37th FW.

On the 4450th Tactical Group was deactivated and the moved from to Tonopah. At that time, (TAC) activated the Det 1, 57 Fighter Weapons Wing (FWW) at Tonopah. Shortly after the move, three pairs of F-117A's participated in Operation JUST CAUSE from Tonopah on 19 December. Only one mission with two F-117As was attempted.

In January 1990 it was announced that the 37th TFW would move from Tonopah to , . However, this was later delayed by the Gulf War. On August 19 22 F-117A's from the 415th and a dozen tankers left Tonopah for . 18 F-117s would continue to Air Base in for Operation DESERT SHIELD.

Current and future use

After the F-117 squadrons vacated the TTR, little was revealed about what, if any, aircraft were based there. The USAF maintains the facility as an active base on the Tonopah Test Range, and the existing runway and navigation aids are open to the DOE and the USAF on an as-needed basis. The facility is lighted for night operations.

In July 2001, a commercial McDonnell Douglas MD-82 aircraft landed at the Tonopah Test Range airfield due to a cargo fire warning light, according to an report. It departed without incident.

Starting in April 2008, the Air Force will send its F-117 fleet back to the Tonopah Test Range for disposal following the aircraft's retirement. Normally the Air Force scraps its aircraft at , Arizona, but the F-117 fleet will be kept at the TTR, presumably due to technology sensitivity or the precedent set by the 1995 SR-71 reactivation. It is expected that the aircraft wings will be removed and the airframes will be stored in their original hangars