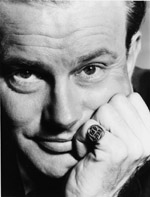 Jack Harold Paar (, &ndash; , ) was an American and talk show host most noted for his status as host of "".

Born in , the son of Howard A. and Lillian M. Paar, he moved with his family to , approximately 30 miles south of , during his childhood. Leaving school at 16, he first worked as a radio announcer at WIBM in and later a humorous disc jockey at stations throughout the Midwest including WJR in Detroit, WIRE in Indianapolis, WGAR in Cleveland and WBEN in Buffalo. In his book "P.S. Jack Paar", he recalled doing utility duty at WGAR on the night broadcast his infamous "War of the Worlds" over the network (and affiliate WGAR). Attempting to calm possible panicked listeners, Paar announced, "The world is "not" coming to an end. Trust me. Have I ever lied to you?"

During , as part of a special services company entertaining troops in the South Pacific, Paar was a clever, wisecracking master of ceremonies. More than once, his pointed jibes at officers nearly got him into trouble. Paar became renowned among servicemen, who thought he was even better than professional comedians.

Jack Paar came to the attention of in Hollywood, which hired him to emcee "Variety Time" (1948), a compilation of vaudeville sketches. Paar later recalled that RKO didn't know what to do with him. His producers, trying to decide what kind of screen characters he could play, compared Paar with other RKO stars. Finally, Paar said, one of the executives had an inspiration, and figured out who Jack Paar really was: ", with warmth." Paar projected a pleasant personality on film, and RKO called him back to emcee another filmed vaudeville show, "Footlight Varieties" (1951). Paar was featured in a few films, including a role opposite in "" (1951).

An impressive stint as a guest host on 's radio show caught the attention of NBC officials, who eventually offered him his best known role as host of "". Paar was the program's host from 1957 to 1962; The show was officially entitled "Tonight Starring Jack Paar," then after 1959 it was known as "The Jack Paar Show". The series became, on September 19, 1960, one of the first regularly scheduled videotaped programs in color. Only a few minutes of video of Paar's talk host career in color are known to exist today; NBC's policy at the time was to preserve programming on black-and-white but even so, the videotapes of most of Paar's Tonight Show appearances were taped over and no longer exist, a policy that continued through the first ten years of Johnny Carson's subsequent hosting of the same series. It was during Paar's stint as host that "The Tonight Show" became the entertainment juggernaut that it remained for the next five decades. Of all the the program's hosts, Paar generated the most obsessivefascination and curiosity from both the press and the public.

The "Tonight" focus was always on compelling conversation and Paar's guests tended to be literate raconteurs such as rather than actors selling their current films, while Paar himself was a superb storyteller. Further, Paar surrounded himself with a memorable group of regulars and semi-regulars, including (as the homespun "Charlie Weaver"), author-illustrator Alexander King, (NBC's sultry "Miss Monitor") and comedy actresses and . In 1959, Paar's gagwriter Jack Douglas became a bestselling author ("My Brother Was an Only Child", "A Funny Thing Happened to Me on the Way to the Grave: An Autobiography") after his regular appearances with Paar. Douglas's pretty Japanese wife Reiko often appeared, as did Hungariansexpot , French comedienne and several Brits as well; Paar enjoyed conversing with foreigners and knew their accents would spice up the proceedings.

During this time, Paar also made occasional appearances on the s "" and "" On episode 215 of the latter, Paar filled in as guest panelist for Steve Allen, his predecessor at "The Tonight Show".

In 1959, he was criticized for his interview with n leader . Later that year, during the show's regular swing through the West Coast, Paar again made the front pages of the national newspapers by asking a visibly-inebriated to leave the program during the December 1st telecast. Two years later, he broadcast his show from just as the was going up. Paar also engaged in a number of public feuds, one of them with CBS luminary , and another with . The latter feud "effectively ended Winchell's career" beginning a shift in power from print to television. ["": "Late Night" episode (2008 mini-series) "Paar's feud with newspaper columnist Walter Winchell marked a major turning point in American media power. No one had ever dared criticize Winchell, because a few lines in his column could destroy a career, but when Winchell disparaged Paar in print, Paar fought back and mocked Winchell repeatedly on the air. Paar's criticisms effectively ended Winchell's career. The tables had turned, now TV had the power."]

Paar was often unpredictable and emotional. The most salient example of this kind of on-screen behavior was demonstrated on the , show, when one of his jokes was cut from a broadcast by studio censors. The joke in question involved a woman writing to a vacation resort and inquiring about the availability of a "W.C." The woman used that term to mean "water closet" (i.e., ), but the gentleman who received the letter misunderstood "W.C." to mean "wayside chapel" (i.e., church). The full text of the joke

The decision to censor the joke so angered Paar that the next night, , he announced on the air that he was leaving the show, saying "I've made a decision about what I'm going to do. I'm leaving "The Tonight Show". There must be a better way to make a living than this, a way of entertaining people without being constantly involved in some form of controversy. I love NBC [...] But they let me down."

Less than a month later, Paar was convinced to return; on he opened his monologue with the now-famous line, "As I was saying before I was interrupted...I believe the last thing I said was 'There must be a better way to make a living than this.' Well, I've looked...and there isn't." He then went on to explain his departure with typical frankness: "Leaving the show was a childish and perhaps emotional thing. I have been guilty of such action in the past and will perhaps be again. I'm totally unable to hide what I feel. It is not an asset in show business, but I shall do the best I can to amuse and entertain you and let other people speak freely, as I have in the past."

The Move to Prime Time

Paar's emotionality made the everyday routine of putting together a 90-minute program difficult to continue for long. Paar made it clear that he was not planning to continue with "The Tonight Show" because, as a "" item put it, he was "bone tired" of the grind, and he signed off for the last time on , 1962.

Paar then began hosting a Friday night show on NBC, entitled "The Jack Paar Program". Popular belief holds that "" introduced to American television audiences; In fact, on January 3, 1964 the group made their prime time debut on Paar's hour in film clips Paar had leased from the BBC, with Paar gently making fun of the band (the Beatles first U.S. television appearance was in a feature story on "" on , ). Paar's show had a world view, debuting acts from around the globe and showing films from exotic locations; most of the films were made on travels made by guests such as or Paar himself (e.g., several visits with at his compound in , West and Mary Martin at her home in the jungles of Brazil). During the first half of 1964, another running feud pitted Paar against the show immediately preceding his program, 's satire series "". A typical exchange would have "That Was the Week That Was" "signing off" the NBC Television Network just before the Paar program, with Paar responding that the show immediately preceding his was "Henry Morgan's Amateur Hour" (Morgan was a frequent guest on the earlier show). The mock feud suddenly evaporated when NBC moved "That Was the Week That Was" to a Tuesday night time slot for the 1964-65 season.

Paar's prime time show aired for three years, including guests such as , , 's brother, , , , Cassius Clay reciting his poetry to piano accompaniment by , an occasionally inebriated , , , (whose nickname for Paar was "The Boss"), , , Dick Gregory and many others. The final closing segment of the series, broadcast on June 25, 1965, featured him sitting alone on a stool, sharing a discussion that he had with his daughter Randy, who called Paar's departure a . Noting the origins of the term, he said that his own field was, though not completely used up, "a little dry recently." Then he called to his , who came to him from the seats of what was, for once, an empty studio, and walked out. precisely copied this format of hosting a clip show from a stool for his own farewell episode of "The Tonight Show" in 1992.

Paar came back for another late-night show in January 1973 on ABC; this time, as one of a group of rotating hosts (including , a former Paar writer) on "", he appeared one week out of each month, which was the most Paar was willing to appear. (Paar later claimed he would not have appeared at all unless ABC committed itself to keeping Cavett's show on the schedule in some manner.) His announcer for this series was , and perhaps the most notable aspect of the series was the fact that comic made his national television debut on it. He later expressed discomfort with what the medium had developed into. While Cavett had no problem interviewing young rock acts, Paar once expressed the view he had trouble interviewing people dressed in "overalls." The show, which was in direct competition with "Tonight", lasted one year before he quit. Dissatisfied with the one-week-per-month formula, he complained that even his own mother didn't know when he was on.

In 1986, NBC aired a special featuring Paar, titled "Jack Paar Comes Home"; the following year, a second special "Jack Paar Is Alive and Well" was broadcast by the network. Both of these specials were largely made up of kinescoped clips from Paar's prime time program, to which he maintained the copyright. In the course of promoting the first special, Paar guested on Johnny Carson's version of "Tonight" for the first time on , . He appeared again to promote the next one on , .

television devoted an edition of the "" series to Paar's career in 1997, and in 2003 revisited the topic with another hour-long examination of the Paar phenomenon, appropriately entitled "Smart Television". The program features clips of Paar with guests including , , , (in his first network appearance), , , , (in his first interview after his brother's assassination), , , and many others compiled from the 1950s and 1960s, as well as more recent interviews with people who worked with Paar.

Paar, who enjoyed many years of relatively good health and made rare guest appearances on "" (hosted by and ) and "", as well as 's talk show, died at his home in January 2004, with his wife Miriam (nee Wagner) and daughter Randy by his side. He had long been in ill health, having undergone triple-bypass heart surgery in 1998. He also suffered a a year before he died.

As noted in "Time"'s obituary, Jack Paar had divided television talk show history into two eras: Before Paar and Below Paar.