The Rifle, .303 Pattern 1914 (or P14) was a British service rifle of the First World War period. A bolt action weapon with an integral 5-round magazine, it was principally contract manufactured by companies in the United States. It served as a sniper rifle and as second line and reserve issue until being declared obsolete in 1947. The P14 was the successor to the P13 Enfield and the predecessor of the U.S. Rifle M1917 Enfield.

During the Boer War the British were faced with accurate long-range fire from the famous Mauser rifles, model 1893 and 1895 , in 7x57mm caliber. This smaller, high-velocity round prompted the War Department to develop their own "magnum" round, the .276 Enfield, in 1910. An advanced new rifle using a modified Mauser-pattern action was built to fire it, the Pattern 1913 Enfield (P13); effective mass production was still some way off when World War I started, to say nothing of the logistical nightmare of introducing a new rifle cartridge in wartime, so nothing came of it.

Adapting the design to fire the standard .303 round led to the Rifle, .303 Pattern 1914 (P14), a competent design fed from a five-round internal magazine. With its prominent sight protection ears on the receiver, "dog-leg" bolt handle and "pot-belly" magazine, it was distinctive in appearance. The action was essentially a Mauser design with some Lee features and optimised for rapid fire, with the action cocking on closing, a feature highly valued by the British Army with its emphasis on riflemen highly trained for rapid fire, but less valued in other armies, such as the US or Germany, where cock-on-opening designs such as the M1903 Springfield and Mauser 98 were preferred. Cock-on-opening actions became more difficult to operate when heated by rapid fire as the effort to open the bolt had to overcome the striker spring to cock the action as well as unsticking the fired case from the chamber. The P14 was an advanced design for the time, and was said to be the most advanced service rifle of World War I.[1] The P14 featured a superbly designed aperture rear sight adjustable to 1600 yards and a 300yd battle setting protected by integral and prominent 'ears' on the receiver bridge. There were also volley-fire sights similar to those on the SMLE fitted to the left side of the weapon for use up to 2600 yards, though these were of little use and were usually deleted when the weapon was refurbished. The bolt had a Mauser type claw extractor and two forward lugs; there was also a rear safety lug formed by the base of the bolt handle sitting in a recess in the receiver. Much faster and smoother to operate than a Model 98 Mauser, the bolt was well-supported throughout its travel and the camming action on opening and closing the bolt facilitated ease and speed of operation. The unusual 'dog-leg' bolt handle is low profile and places the knob close to the firer's hand, again facilitating rapid fire. Like the Lee Enfield, the safety falls under the firer's thumb and can be operated silently. It is a large, strong action, and the bolt travel is long, as it was designed for a powerful cartridge. The strength and stiffness of the action and the comparatively heavy barrel contributed to a well-deserved reputation for accuracy. 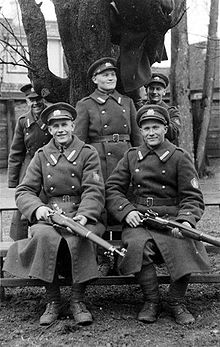 Conscripts of the Estonian Sakala Partisan Battalion with P14 rifles in 1939 or 1940.

The primary contractor (Vickers) was unable to produce more than a handful of rifles, so the P14 became a de facto afterthought. The SMLE therefore remained the standard British rifle during World War I and beyond. Compared to the Lee-Enfield the P14 was more accurate, more durable, and had nearly the same high cyclic rate of fire; however, it was considerably heavier and had only half the magazine capacity, giving it a significantly lower effective rate of fire. In contrast to the Boer War experience which had led to the P13/P14 project, Great War conditions favored volume of fire, at which the SMLE excelled.

The need for additional small arms combined with a shortage of spare industrial capacity led the British government to contract with U.S. commercial arms manufacturers, Winchester, Remington and Eddystone (a subsidiary of Remington set up principally to manufacture the P14) to produce the P14 for the British before the US entered the war in 1917. However, each factory produced parts from their own designs, leading to interchangeability issues; Winchester was particularly troublesome in this regard, going so far as to refuse for months to change to the new Mk I* standard. Therefore, the official designation of the rifle was dependent upon its manufacturer: e.g., the Pattern 1914 Mk I W is a Mk I of Winchester manufacture, R would be Remington, or E for Eddystone. The P14's principal combat use during World War I was as a sniper rifle, since it was found to be more accurate than the SMLE, either in standard issue form or with modified micrometer-adjustable or telescopic sights (modified and telescopic sights were used only on Winchester-manufactured rifles, the Winchesters being thought to be of superior quality).[2]

When the U.S. entered the war, the P14 was modified and standardized by the U.S. Ordnance Department and went into production at the same factories as had produced the P14, production of that rifle having ceased, as the Model of 1917. Sometimes called the M1917 Enfield, it was chambered for the standard US 30-06 cartridge and enjoyed some success as a complement for the Springfield M1903 rifles which were America's official standard issue, soon far surpassing the Springfield in total production and breadth of issue.

Prior to and during World War II, the P14 was used, after undergoing modification ("Weedon repair standard", formally the Mk II standard) in Britain as a rearguard rifle, primarily to equip the World War II Home Guard. The rifle was also used again as a sniper rifle, the configuration being different from the World War I incarnation. Additionally, the US also sent some M1917 rifles to the UK under Lend-Lease, though the different cartridge limited use and necessitated clearly marking the rifles with a 2 inch wide red band around the stock. The Australian Army also used some quantities of the sniper variant of the P14 during World War II. It was declared obsolete in British service in 1947.

Surplus P14s were sold throughout the Commonwealth, especially Canada, New Zealand, Australia and South Africa, where they proved popular for full-bore target shooting, and being sporterised for game shooting. 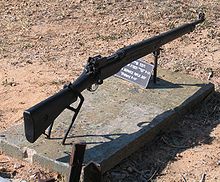