Alec Empire (born Alexander Wilke-Steinhof on 2 May 1972 in Charlottenburg, West Berlin) is a German musician who is best known as a founding member of the band Atari Teenage Riot. Also a prolific and distinguished solo artist, producer and DJ, he has released well over a hundred albums, EPs and singles and remixed over seventy tracks for various artists including Björk.[1] He was also the driving force behind the creation of the digital hardcore subgenre and the record labels Digital Hardcore Recordings and Eat Your Heart Out.

Wilke's father was a working-class socialist, himself the son of a radical activist who perished in the concentration camps of the Second World War.[2][3] His maternal grandfather, Karl Steinhof, was a self-made millionaire who patented the first domestic hand-knitting appliance during the economic boom in Germany in the 1950s.[2][4]

Wilke grew up during the Cold War near the Berlin Wall, which he would pass every day on his way to school. The frequent sight of patrol guards with guns influenced his outlook on life from an early age.[5] He describes Berlin at the time as: "Probably the most left radical place in Germany in the 70s, terrorists, a lot of demonstrations, and probably the first address to hear the latest American music, because of the radio shows the US soldiers brought to Berlin."[6]

At the age of ten, Wilke's love of rap led to a vogueing career on the streets of Berlin.[7][8] Later disillusioned by that genre becoming increasingly commercial, he left it behind in favour of a completely different form of musical expression. He had played guitar since the age of eight which coupled with his politically-charged upbringing eventually led him to punk music; he formed his first band, Die Kinder, at age twelve.[8]

By sixteen, however, Wilke came to believe that the punk movement was "dead" (though the anti-establishment punk attitude would figure significantly in his subsequent output). After leaving Die Kinder, he began listening to classical music and experimenting with electronic instruments.[9] He eventually became fascinated by the rave scene, and, following German reunification, frequented underground raves in East Berlin, believing his native West Berlin scene to be too commercialised. Known earlier in his career as LX Empire he produced a great deal of what he refers to as "faceless DJ music".[10] In 1991, while DJing on a beach in France with friend Hanin Elias, he caught the attention of Ian Pooley, which led to the release of a number of 12" records on the Force Inc. label.[10]

Although Empire was a prolific producer and DJ at this time,[11] and made a comfortable enough living, he nevertheless saw the rave scene as decadent and selfish. This angered him, as he and his friends lived in a city embroiled in politics, and the demise of communist-led governments had given rise to increased conservatism in Germany, whilst few people cared. The German neo-Nazi movement had invaded the scene, declaring trance techno "true German music".[11]

Empire retaliated by utilising samples of 60s and 70s funk – a predominantly black style of music – in his solo work. In order to further spread the message, he gathered like-minded individuals Hanin Elias (also a former punk) and Carl Crack (a Swazi MC) to form a band. In 1992, the trio became known as Atari Teenage Riot (ATR).[citation needed]

Atari Teenage Riot's sound was characterised by the use of breakbeats (again sampled from funk and rap, but replayed at more than twice their original speeds), heavy guitar riffs, and the shouting of politically-driven lyrics and slogans by the band members (as well as sampled dialogue). Empire provided much of the musical direction, and with the later input of Japanese-American noise musician Nic Endo, the ATR sound took on a more chaotic, arrhythmic nature marked by rough sequencing, improvised mixing and extended "noise-fests".[citation needed]

ATR signed a record deal with Phonogram, a major UK label, in 1993. The two parted ways after only a couple of single releases, due to the band's refusal to play by the label's rules.[12][13] In 1994, using the non-refundable cash advance from the deal, Empire started an independent record label which allowed its artists the freedom of expression Phonogram were unlikely to give. He named it Digital Hardcore Recordings (DHR); "digital hardcore" would become a general term used to describe the direction his sound had taken. That year, DHR released EPs by EC8OR, Sonic Subjunkies, and Empire himself.

While working with ATR, Empire continued steadily with his solo output. He recorded for Force Inc. under several pseudonyms, including the Detroit techno-inspired Jaguar. He also recorded several albums for Force Inc.'s experimental sub-label Mille Plateaux, including Generation Star Wars (his first full solo album) and Low on Ice, which he recorded entirely on his laptop during a three day tour of Iceland with ATR. In 1995, ATR released their first proper album, Delete Yourself!, on DHR, and, in 1996, Empire released his first solo album for DHR, The Destroyer. In that year, Empire and Mike D signed a deal to release a number of DHR's recordings on the Beastie Boys' Grand Royal record label in the United States.[14] The label also invited DHR artists to tour the US leading to recognition by MTV and alternative radio stations.[citation needed]

ATR spent the next few years touring the world with artists such as Jon Spencer Blues Explosion, Beck, Rage Against the Machine, the Wu-Tang Clan and Ministry, as well as headlining such memorable shows as the Digital Hardcore festival at CBGB's in New York City in 1998, and the Queen Elizabeth Hall show in London in 1999 at the request of fan John Peel.[15] During this time they introduced Nic Endo to their ranks as a fourth member. Listener opinion was often divided over the newer sounds ATR subsequently incorporated, and this, along with other factors, began to strain the band.[citation needed]

All of the members found some comfort in their solo work – Empire's output at this time would include his sole release as Nintendo Teenage Robots, and the bootleg recording Alec Empire vs. Elvis Presley, as well as remixes for the likes of The Mad Capsule Markets, Mogwai and Thurston Moore. However, ATR's problems worsened. Onstage at one show in Seattle in 1999, Empire slashed his forearms with a razor.[3] At another show that year in London, in which ATR supported Nine Inch Nails, the band dispensed with the usual song-based formula and delivered one long barrage of what could only be described as "noise"; this would later be released as Live at Brixton Academy.

By the end of 1999, Empire was mentally exhausted, Elias was pregnant and Crack was suffering from psychosis induced by prolonged drug use.[14] The band was put on hiatus; its future was made even more doubtful following Crack's death in 2001,[16] and Elias' decision to leave DHR and create Fatal Recordings. 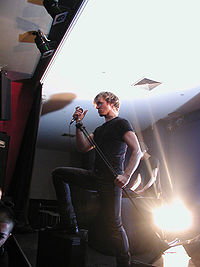 Empire rebounded in 2001 when he, with assistance from Endo, recorded Intelligence and Sacrifice. The album contained two discs: the first retained the ATR formula, yet exhibited a more polished production style and lyrics of an unusually introspective nature;[17] the second disc was an electronic instrumental album, and in contrast was more experimental. He used an all-star lineup in his first live "Alec Empire" show at the Fuji Rock Festival in Japan: Charlie Clouser (ex-Nine Inch Nails) played synths, Masami "Merzbow" Akita and Gabe Serbian (The Locust) both played drums, and Endo played synths and keyboards.[18]

Empire's next lineup would include a guitarist, Robbie Furze, who would later record for DHR with Panic DHH. Empire also played a series of live shows performing material from the second disc of Intelligence and Sacrifice; one of these was released as The CD2 Sessions in 2003. He returned in 2005 with Futurist, which was less electronic than its predecessor and had more of a raw punk-rock sound, albeit assisted by drum machines and some processing.[19]

Empire began 2006 by DJing at industrial pioneers Throbbing Gristle's New Year's Eve party.[20] During that year he remixed fellow Germans Rammstein (whom he once said were "successful for all the wrong reasons"[21]) and New York hardcore band Most Precious Blood. He also recorded a cover version of The Monks' "Monk Time" for a tribute album with that band's singer Gary Burger, and Russell Simins of Blues Explosion.[22] Atari Teenage Riot: 1992-2000, a retrospective album, was released by DHR on 3 July 2006.

In 2007, Empire announced that DHR would hence forth assume a more "underground" role,[23] as his focus turned to a new label, Eat Your Heart Out,[24] which he describes as "the sound of New Berlin".[25] The label's first release was his 12" single "Robot L.O.V.E.", followed by an album, The Golden Foretaste of Heaven, recorded with his new production team and touring band The Hellish Vortex, released in Japan on 28 November 2007 and in Europe on 21 January 2008.[26] The second single release, the On Fire EP, was released on 7 December.[27] Sixteen Years of Video Material, a DVD featuring rare footage of Empire and ATR will be released on German video label Monitorpop in July 2008.[28][29]

Alec Empire's body of work spans a range of electronic (as well as conventionally less electronic) styles. His earlier releases for Force Inc. were influenced by the rave scene in his native Berlin, and included acid house, techno, hardcore, punk and breakbeat (all of which are evident on the SuEcide EPs and the Limited Editions 1990-1994 compilation). On creating DHR his solo recordings for that label consisted largely of the digital hardcore staples of breakcore (as heard on The Destroyer album and EPs) and later experimental noise (as heard on Miss Black America), while his work during the same period for Mille Plateaux saw him experimenting with minimal techno (Pulse Code), ambient (Low on Ice) and musique concrète (Les Étoiles des Filles Mortes). His alter-egos for various labels provided outlets for dabbling in other genres such as drum and bass/jungle (DJ Mowgly), Detroit techno (Jaguar) and even chiptune music (Nintendo Teenage Robots).[citation needed]

After the demise of Atari Teenage Riot, Empire's major releases for DHR sought to continue in the guitar-based, punk-influenced vein of the band. Intelligence and Sacrifice utilised live guitars, breakbeats, noise, sampled cinematic dialogue and Empire's trademark spoken/shouted English vocals, while Futurist saw a more obvious return to his punk roots and consequently sounds as if it were largely recorded using all live instrumentation, even though it was electronically produced. The creation of the Eat Your Heart Out label saw a move to a much more electronic-sounding approach with comparatively subdued vocals over synthesized sounds and beats.[citation needed]