I and the Village

I and the Village 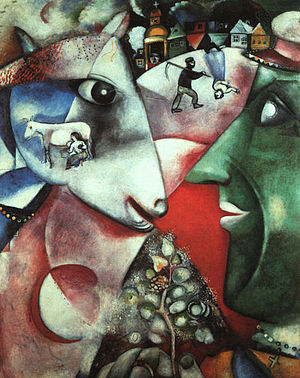 I and the Village is a 1911 painting by the Russian-French artist Marc Chagall. It is currently exhibited at the Museum of Modern Art, New York.[1]

The work contains many soft, dreamlike images overlapping each other in a continuous space:[2] in the foreground, a cap-wearing green-faced man stares at a goat or sheep with the image of a smaller goat being milked on its cheek. In the foreground is a glowing tree held in the man's dark hand. The background features a collection of houses next to an Orthodox church, and an upside-down female violinist in front of a black-clothed man holding a scythe. Note that the green-faced man wears a necklace with St. Andrew's cross, indicating that the man is a Christian. As the title suggests, I and the Village is influenced by memories of the artist's place of birth and his relationship to it.[3][1][4]

The significance of the painting lies in its seamless integration of various elements of Eastern European folktales and culture, both Russian and Yiddish.[5] Its clearly defined semiotic elements (e.g. The Tree of Life) and daringly whimsical style were at the time considered groundbreaking.[6] Its frenetic, fanciful style[3] is credited to Chagall's childhood memories becoming, in the words of scholar H.W. Janson, a "cubist fairy tale"[7] reshaped by his imagination, without regard to natural color, size or even the laws of gravity.[3]