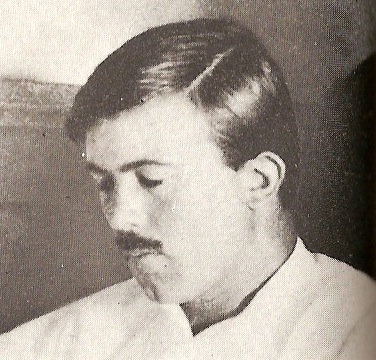 He was born in into a well-off Anglo-Irish family, while his father was serving there in the . He was educated at Radley, a boarding school in England, which he hated due to the bullying he endured. His autographical works make it clear that he did not enjoy a good relationship with his father.

At the age of 18, and to spite his father who wanted him to train at Sandhurst, he set off with an older friend, the occasional photographer and eccentric, , to walk to China. Between August 1912 and January 1913 they walked 1,560 miles, reaching Bosnia before lack of money made them turn back. He spent the next 10 months in Germany learning the language, surprisingly in preparation for joining the Indian Police Service. This plan was interrupted by the outbreak of . He immediately joined the British Army and served in France throughout the war. After the war introduced him to the .

In 1919 he settled in , in the small village of , in the s district of the province of Granada. He spent his time catching up on the education which he felt he had missed by not attending university, and in writing. An important factor in his moving to Spain was his calculation that his small income would go further there. Despite the remoteness of his new home, contacts with Bloomsbury continued, particularly with , who was the wife of his best friend , and with whom he had an intense, and intermittently sexual, relationship from 1919 to 1928 Fact|date=June 2007.

In in 1930 he met the American poet and novelist (1895–1968); they married in in 1931. During the and for many years afterwards they lived in in . Brenan was permitted to return to Spain in 1953 despite holding views which were critical of ´s regime. He spent most of the remainder of his life in Alhaurín el Grande, Málaga. In 1984 he was moved in controversial circumstances to a nursing home in , but he returned to Spain after the authorities there made special arrangements to provide him with the nursing care on which he depended.

*"Carrington" (1995), about the life of the artist , included an account of her trip to Spain to visit Gerald Brenan (played by ).
*"South From Granada" was filmed by as "" (2003), starring as Brenan. It was nominated for eleven and won one.