Devgadh Baria (sometimes Devgadhbaria or just Baria) is a municipality in Dohad district in the state of Gujarat, India. It is a small town nestled in the foothills on the eastern border of Gujarat State. It is 44 kimters (kilometers) from Godhra in the West, 54 kimters from Dahod in the East and 14 kimters south of Ahmdabad-Indore highway (National Highway 59). It was established in 1782. The state was ruled by Chauhan kings until its merger with the Union of India. The last ruler of Devgadh Baria was married to a daughter of Gayatri Devi of Jaipur. Rajasthan, India.

Devgadh Baria is located on the bank of Panam River; a town built very articulately in princely style. It is part of Dahod district (formerly Panchmahal) in the state of Gujarat.

This town was established in the year 1782. Two sons of King Vatai Rawal escaped from this region when the famous King of Gujarat, Mohamad Beghado, tried to conquer Pavagadh. Older brother Prithiraj’s son Udaisinh established the town of Chhota Udaipur, whereas the younger brother Dungerpursinh established the famous town of Devagadh Baria. The family of Dungersinh ruled the Baria State for the twelve generations.

The state of Baria was always safe due to the unique geographical location. King of Baria never gave any monitory compensation to Moslems or Maratha rulers. Internal state affairs were performed independently, without any outside help. Baria State was divided into Sagtala, Rajgadh, Haveli, Dhanpur, Limkheda and Randhikpur. These regions were known as Mahals. Administrators and Thanedars were appointed for the smooth administration of each Mahals.

In 1864, after the death of King Dungersinh, a coronation ceremony was held to declare his grandson Mansing as the ruler King. At the time coronation he was only 9 years old and hence the administration of the state was entrusted to an Agency. A superintendent was appointed by this Agency during 1865 to 1876. During this time, each town of the Baria State was surveyed and a limit was established. King Mansinh took over the administration back from the Agency on 6 November 1876.

King Mansinh was reformer and had a modern outlook. He started some important educational institutions like: A school with English education, Kumar Shala – a school for the Boys, Kanya Shala – a school for the Girls, and a Chhatralaya – a Dormitory. He also established the Police force, and justice and Revenue departments. In 1892 a proposal was made to start a railroad system from Godhara to Ratlam via Devgadh Baria, but because Baria wanted to remain independent, the plans were changed and permission was granted to start railway system from Piplod to Limkheda. Late on, Baria-Piplod narrow gauge railway was built by the state themselves.

King Mansinh died in 1908, leaving behind him, two sons and a daughter – Ranjitsinhji, Naharsinhji and Surajkuvarba. His marble statue in the Baria circle bazaar is a pride monument of Baria. Man Sarovar, a huge lake, in honor of this great king, reminds us all of his fame.

At the coronation ceremony in the year 1908, Ranjitsinhji was installed as a King. Highly educated and a person with brilliant career, he had joined the Imperial Cadet Core and was awarded the title of “Knight Commander of India”. Because of this prestigious title, he was popularly known as Sir Ranjitsinhji.

During his rule, some very important public institutions were established, some of them are a High School, a Veterinary hospital, a Gymkhana, a Tower, Library etc. Free education was offered in the state to all the school going students, to bring cultural awareness in the society. It was a golden period for the sports in Baria during Sir Ranjitsinhji’s rule. Rudisinhji and Hirasinhaji of royal family were very much interested in various sports. During this period inviting teams from outside cities held sports like polo, badminton, tennis and table tennis were being played in Baria and competitions.

After the death of Sir Ranjitsinhji, his grandson, Jaydipsinhji (son of Youvraj Subhagsinhji) was established as a King, at the coronation ceremony in the year 1948. A few years after India gained independence from British rule, all the small kingdoms and kings were abolished and their authorities were taken away. In this transformation process, Baria was merged into Bombay State. Jaydipsinhji was no longer a king but during his entire life span in Baria, he had already established himself as a king in everybody’s hearts[clarification needed]. During his rule Sir Madhavsinh Lalji Chuahn was the superintendent of police of Baria State. He was devoted to his duty and rewarded for his duty.

Shri Jaydipsinhji was a Rajyogi. He had donated most of his personal assets to various institutions for the common good of the people of Baria and surrounding areas. His own Rajmahal (King’s residential Palace) was donated to Gujarat Agricultural Institution. He established AdivasiResearch and Training institution, for uplifting of these poor people. Old Rajmahal was also dedicated to the Baria Higher Education Society. He started Yuvraj Subhagsinhji Arts College for the higher college education. An assports complex was started in the big open space of Sir Ranjitsinhji Gymkhana, for the enhancement of various sports events. Shri Jaydipsinhji was honorable country member of World Olympics.

More information about the history of the town may be obtained from a website created by North American immigrants from Baria.[1]

Poor and Tribal children are getting to learn English and Computers through roleplay.

Video of a student testing the concepts learnt, through role play.

And a Computer Lab for practicals.

Video of the Computer Lab set up in Devgadh Baria. Accommodates sixteen students at a time.

Beginners and convalescents are provided free training under the aegis of OJUSS, organisation for job up gradation and skill sharing. Devgadh Baria's Therapeutic Yoga Centre is located in Khos valley, 2 kimters from Chougania and 4 and a half kimters from center of the town. For those unwilling to go deep in the forest there is the Yoga Point at U turn Chougania. 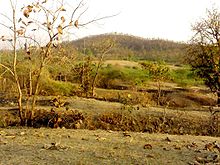 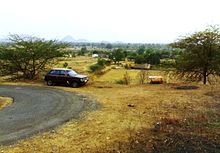 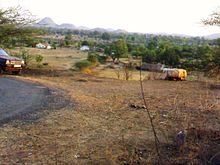 First Self Help Group of unemployed graduates that underwent training in OJUSS’s Free Computer Lab became operational on 02.13.2010. In 3 months members will earn enough to buy their own computers and work independently. 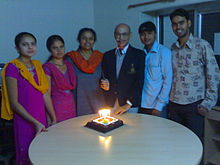 Unemployed graduates celebrate creation of their Self Help Group on 02.13.2010

Baria has quite a few picturesqe places - for example Sunset point at Chougania valley south of the town, through which meanders the Panam river. 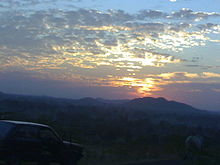 The valley provides a breath taking sight of storks flying home from the river and Tidki reservoir in twilight.

Video of egrets flying home from the river and Tidki reservoir in the twilight.

Less than 2 kimters east of Chougania is the relatively unspoilt Khos valley with any number of hiking trails away from vehicular noise and emissions. That is where clusters of Mahua trees transform the arid landscape when they shed their leaves in peak summer. The intensity of the colour needs to be seen to be believed. Nature’s spread lasts but a few weeks, before the farmers burn the leaves to facilitate gathering of Mahua flowers for making inter alia the heady mahua wine. 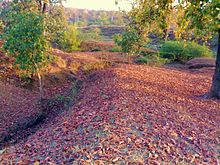 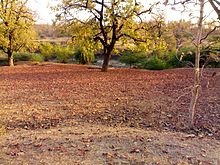 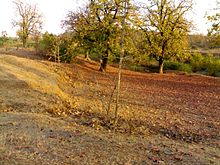 And the chirping birds are a sheer delight.