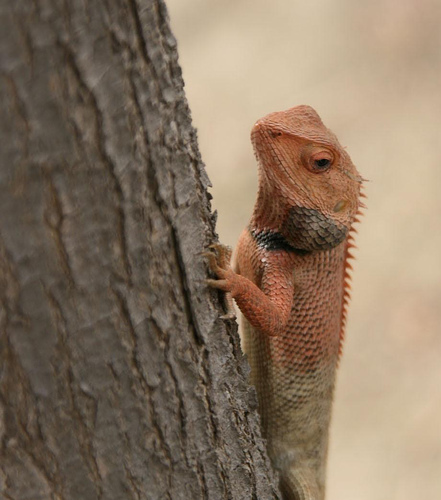 The Oriental Garden Lizard ("Calotes versicolor") is an lizard found widely distributed in . It has also been introduced in many parts other parts. It is an insectivore and the male gets a bright red throat in the breeding season leading to a common incorrect name of "Bloodsucker".

Two small groups of spines, perfectly separated from each other, above each tympanum. Dorsal crest moderately elevated on the neck and anterior part of the trunk, extending on to the root of the tail in large individuals, and gradually disappearing on the middle of the trunk in younger ones. No fold in front of the shoulder, but the scales behind the lower jaw are much smaller than the others; gular sac not developed. From thirty-nine to forty-three series of scales round the middle of the trunk. The hind foot (measured from the heel to the extremity of the fourth toe) is not much longer than the head in the adult, whilst it is considerably longer in the young. The coloration is very variable, sometimes uniform brownish or greyish-olive or yellowish. Generally broad brown bands across the back, interrupted by a yellowish lateral band. Black streaks radiate from the eye, and some of them are continued over the throat, running obliquely backwards, belly frequently with greyish longitudinal stripes, one along the median line being the most distinct; young and half-grown specimens have a dark, black-edged band across the inter-orbital region.

The ground-colour is generally a light brownish olive, but the lizard can change it to bright red, to black, and to a mixture of both. This change is sometimes confined to the head, at other times diffused over the whole body and tail. A common state in which it may be seen (as stated by Mr. Jerdon) is, seated on a hedge or bush, with the tail and limbs black, head and neck yellow picked out with red, and the rest of the body red. Jerdon and Blyth agree that these bright, changeable colours are peculiar to the male during the breeding-season, which falls in the months of May and June.

Mouhot has collected in Siam one of those fine variations of colours, which, however, appear to be infinite. It has the usual cross streaks between the eyes and the radiating lines continent of India to China; it is very common in Ceylon, not extending into the temperate zone of the Himalayas. Ceylonese specimens are generally somewhat larger; one of them measured 16 inches, the tail taking 11 inches. It is found in hedges and trees; it is known in Ceylon under the name of "Bloodsucker", a designation the origin of which cannot be satisfactorily traced; in the opinion of Kelaart, the name was given to it from the occasional reddish hue of the throat and neck. The female lays from five to sixteen soft oval eggs, about 5/8ths of an inch long, in hollows of trees, or in holes in the soil which they have burrowed, afterwards covering them up. The young appear in about eight or nine weeks. In a hot sunny day a solitary Bloodsucker may be seen on a twig or on a wall, basking in the sun, with mouth wide open. After a shower of rain numbers of them arc seen to come down on the ground and pick up the larva and small insects which fall from the trees during the showers.

The native range of the species includes SE Iran, , , , , (including the and particularly common in mainland India), (Ceylon), , , Western , , Pulo Condore Island, South China (, , , , ), (), (Reunion, Rodrigues) and introduced to and . In Singapore, it is a threat to the native . (http://www.wildsingapore.per.sg/discovery/factsheet/lizardchangeable.htm)

These lizards can change their colours, quite rapidly, but not as rapidly as chameleons. Mangrove and wetland wildlife atSungei Buloh Nature Park Main features: Medium (37cm), distinguished by the two spines above the eardrums (tympanum), lack of spines behind the eye and lack of a shoulder fold.

Changeable Lizards are usually a dull brown, grey or olive with speckles or bands, but can can be seen in other colours such as bright green. These colour changes may reflect their moods.

During the breeding season, the male's head and shoulders turns bright orange to crimson and his throat black. Males also turn red-headed after a successful battle with rivals. Thus their other gruesome name of "Bloodsucker Lizard". But they don't actually suck anybody's blood! Both males and females have a crest from the head to nearly the tail, hence their other common name "Crested Tree Lizard".

Changeable Lizards are related to iguanas (which are found only in the New World). Unlike other lizards, they do not drop their tails (autotomy), and their tails can be very long, stiff and pointy. Like other reptiles, they shed their skins. Like chameleons, Changeable Lizards can move each of their eyes in different directions.

Changeable Lizards eat mainly insects and small vertebrates, including rodents and other lizards. Although they have teeth, these are designed for gripping prey and not tearing it up. So prey is swallowed whole, after it is stunned by shaking it about. Sometimes, young inexperienced Changeable Lizards may choke on prey which are too large. They are commonly found among the undergrowth in open habitats including highly urban areas. The lizards were introduced to Singapore from Malaysia and Thailand in the 1980s.

Breeding: Males become highly territorial during breeding season. They discourage intruding males by brightening their red heads and doing "push-ups". Each tries to attract a female by inflating his throat and drawing attention to his handsomely coloured head. About 10-20 eggs are laid, buried in moist soil. The eggs are long, spindle-shaped and covered with a leathery skin. They hatch in about 6-7 weeks. They are able to breed at about 1 year old.

Role in the habitat: Changeable Lizards control the population of their prey. In turn, they are food for predators higher up in the food chain.

Status and threats: The Changeable Lizard is relatively common and found in a wide range of habitats. They appear to adapt well to humans and are thus not endangered.