The Civic Media Center (CMC) is a grassroots, community-based radical infoshop, an alternative library and reading room in Gainesville, Florida, United States. The CMC is a 501(c)(3) non-profit organization funded by offering yearly memberships to access the substantial resources housed within the space and donations from friends and members alike. 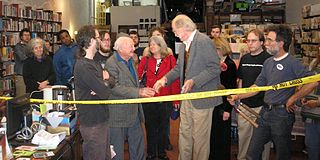 Noam Chomsky dedicated the CMC on October 18, 1993 at its original venue upstairs at 1636 West University Avenue. The CMC was founded [1] by Charles Willett, The Gainesville Iguana, and other members of the Gainesville alternative press and activist community.[2]

In 1994, the CMC moved to an accessible and larger facility at 1021 West University Avenue.

After being chosen by Stetson Kennedy, then 92 years old, who has worked with the center since its inception, as the repository for his personal library, the CMC moved to a yet larger venue at 433 South Main Street, which was dedicated by Kennedy[3]. 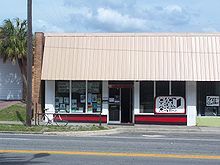 Exterior of the CMC's present venue 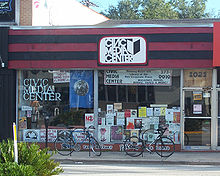 The CMC houses a vast collection of periodicals, books from the alternative press, films, zines, and audio recordings which are available for its members to check out and everyone to use on site. The CMC boasts one of, if not the, largest collections of zines in the United States, actually possessing too many to display at any one time.

The periodicals archive contains literature from African national liberation struggles from the '60s to local student newspapers put out during the Vietnam war era student movement at the University of Florida.

There is also a collection of early original documents from Gainesville Women's Liberation, the first women's liberation group in the South, which was formed in 1968.

And, finally, as noted above in the history, the CMC is the repository of Stetson Kennedy's extensive personal library, which contains about 2,000 books and publications he collected over his 74-year career a folklore archivist and as an activist[3].

In addition to its functions as a library, the CMC also regularly hosts events, often partnering with community groups and student organizations from the nearby University of Florida.

Weekly events at the CMC include:

Acting as progressive and radical community space is a priority for the CMC, and one may find everything from sundry activist groups' and unions' meetings to high school punk rock shows to knitting groups, workshops, or gatherings of the Gainesville Critical Mass riders.