The Green-Rainbow Party is a political party in Massachusetts. It is the Massachusetts state affiliate of the Green Party of the United States.

In 2002, the party was renamed when it merged with the Rainbow Coalition Party, which was founded by former State Representative Mel King. King endorsed Stein's 2002 candidacy for governor, saying "Jill Stein is the only candidate who will speak truth to power. She's the only one that makes issues of racism and social justice integral parts of her campaign".[1]

In 2004, with David Cobb as its presidential candidate, the Green-Rainbow ticket was unable to meet the required 3% threshold, and subsequently lost recognition in Massachusetts of state party status. Losing state party status has the results that the expenditures on Massachusetts candidates are subject to the state laws regulating political action committees (or PACs). In addition, the party name is no longer printed on voter registration forms as an option to check off, and the party must collect signatures to place presidential candidates on the ballot; state and local candidates always need signatures to be placed on the ballot.

In March 2006, at its nominating convention, the party nominated five candidates for statewide office: Grace Ross for governor, Wendy Van Horne for lieutenant governor, Jill Stein for secretary of the Commonwealth, James O'Keefe for treasurer, and Nathanael Fortune for auditor.[2] In early April, Nathaniel Fortune withdrew his candidacy. The races for secretary of the Commonwealth and treasurer were two-way races between the Democrats and Green-Rainbows, with Green-Rainbows polling higher than ever before on a statewide level. In an April 3, 2006 poll by Suffolk University and WHDH, O'Keefe polled at 21% and Stein at 8%. The Ross / Van Horne team, likely to face three other opponents in the election, polled at 2%, before having officially announced.[3]

When Van Horne withdrew from the race in early September, she was replaced by Martina Robinson, a 30-year-old disability and equal marriage rights activist.[4]

Ross and Robinson only garnered 2% of the vote in the gubernatorial election. However Stein won 18% in the race for Secretary of State and James O'Keefe won 16% in the race for State Treasurer.[5] As a result the Green-rainbow Party once again has ballot access. 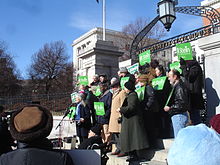 Jill Stein announcing her candidacy for governor in February 2010

Jill Stein officially announced her entrance into the governor's race on the steps of the Massachusetts State House in Boston on February 8, 2010.[6] As of February 25, she was polling at 3% in that race.[7] Stein announced on April 3, 2010, that her lieutenant governor running mate would be Richard P. Purcell, a surgery clerk and ergonomics assessor, of Holyoke.[8]

Beyond Stein's run for governor, three additional candidates ran for office as Green-Rainbow candidates: two for the state legislature and one for state auditor. In the state's 4th Berkshire District, Lee Scott Laugenour announced that he would challenge incumbent State Representative William "Smitty" Pignatell.[9] The state's 3rd Berkshire District will see a race between Green-Rainbow Party candidate Mark Miller and incumbent candidate Christopher N. Speranzo.[10] Both of these Green-Rainbow Party candidates are in the position of being the only challengers to incumbent office-holders. Nat Fortune rounded out the ticket, running for Massachusetts Auditor. [11]

On election day Mark Miller received 45 percent of the vote, the best result for any Green running for state legislature in the United States in 2010. [12] Nat Fortune received 5 percent of the vote guaranteeing the Green-Rainbow Party official party status in Massachusetts for the subsequent two years.[13]

Mark Miller announced his intention to run again for state legislature in the 3rd Berkshire District after incumbent Democrat Christopher Speranzo vacated his seat after being appointed as the clerk magistrate of Central Berkshire District Court. A special election is being held on October 18th for the seat. [14] [15]

Currently, the most prominent public office-holder registered in the Green-Rainbow party is Boston city councilor Chuck Turner, representing district 7. On November 3, 2009, Mr. Turner was re-elected with 59.83% of the vote.[16] As of May 2, 2010, there were fifteen elected Green-Rainbow Party members across the commonwealth serving in a variety of local government positions.[17] They are as follows:

The party has been involved in co-organizing an annual March to Abolish Poverty[18] since 2004. Like many minor parties that view the Democratic and Republican parties as creating difficult ballot access laws, the party has also pushed for electoral reforms, particularly instant run-off voting (IRV). The party also champions universal health care and strongly supports the Massachusetts Supreme Judicial Court's decision to allow same-sex marriages within Massachusetts.

The Green-Rainbow Party favors decentralized political power, and its proposed internal structure reflects this, encouraging members to start chapters or "locals" in their city or region. On the state level, there are several decision-making bodies.

State conventions are held at least annually, and represent the most powerful decision-making body. Any member of the party, as defined by the by-laws, is a voting member of this body and along with a co-sponsor, may submit proposals for adoption at the convention. Proposals have many uses, including but not limited to platform changes, public statements, or by-law amendments. Proposals are decided upon using the consensus decision-making process.

The administrative committee handles day-to-day decisions the party must make, and is composed of the following officers: male co-chair, female co-chair, treasurer, secretary, communications director, membership director, fundraising director, and five diversity seats. Officers are elected by the state convention and vacancies are filled at the state committee. Officers serve one-year terms. There are no term limits.

The Green-Rainbow Party also sends four delegates to serve on the Green Party National Committee, and other representatives to national working committees.