Corral is a town, commune and sea port in Los Ríos Region, Chile. It is located south of Corral Bay. Corral is best known for the forts of Corral Bay, a system of defensive batteries and forts made to protect Valdivia during colonial times. Corral was the headquarters of the system. Economic activities in Corral revolve around forestry, aquaculture, fishing, port services and both heritage and eco tourism. 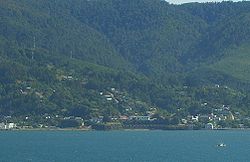 Corral and its fort as seen from Niebla

The settlement of Corral grew out from the headquarters of the forts of Corral Bay that were built in 1645 to protect the city of Valdivia. By that time Spanish ships sailed through Valdivia River all the way to Valdivia but Corral soon took over the role of receiving major ships. With the Spanish king's Decree of Free Trade of 1778 cities in Spanish America were allowed to have direct commerce with Spain, which greatly stimulated commerce in Corral that benefited from trade routes across Cape Horn. During the Chilean Independence War Corral and Valdivia functioned together with Chiloé as a prominent royalist strongholds. In 1820 Thomas Cochrane, commanding the newly created Chilean Navy, took Corral and Valdivia by an amphibious attack. From the times of Chile's independence until the early 20th century Corral gained prominence as an important port for traffic between the Pacific and the Atlantic Ocean, as Chilean port were declared open to ships sailing under any state flag. After being incorporated into Chile the forts in Corral fell gradually into disuse. Since late colonial times Corral became not only the main port of entrance to the inlands of Valdivia but also of Osorno that was founded in 1796.

The economic activity of Corral suffered several setbacks in the 20th century that led it to became a minor port by international and Chilean standards. The Panama Canal opened in 1914, and Valdivia and Osorno were became connected to central Chile by train in 1906 and 1905 respectively. This changed the trade and human traffic circuits in the region, resulting in Corral losing most of the international traffic that anchored there abut also of the Chilean goods and human traffic that was diverted by the railroads. In 1910 after a huge investment the largest steel mill to the time in South America was opened in Corral. The steel mill proved to be an economical failure and was finally closed in 1958.[clarification needed] The decline of Corral culminated with the 1960 Valdivia earthquake that destroyed houses, roads and port facilities.

As a commune, Corral is a third-level administrative division of Chile administered by a municipal council, headed by an alcalde who is directly elected every four years. The 2008-2012 alcalde is Gaston Peréz González (ILE).[1][2]

Within the electoral divisions of Chile, Corral is represented in the Chamber of Deputies by Alfonso De Urresti (PS) and Roberto Delmastro (RN) as part of the 53rd electoral district, (together with Valdivia, Lanco, Mariquina and Máfil). The commune is represented in the Senate by Andrés Allamand (RN) and Eduardo Frei Ruiz-Tagle (PDC) as part of the 16th senatorial constituency (Los Ríos Region).