CUHK is the only tertiary education institution in Hong Kong with Nobel Prize winners on its faculty, including Chen Ning Yang, James Mirrlees, Robert Alexander Mundell and Charles K. Kao (winner of the 2009 Nobel Prize in Physics). Other eminent thinkers at the university include mathematician Shing-Tung Yau, holder of the prestigious Fields Medal and Veblen Prize, and computational theorist Andrew Yao, winner of the Turing Award.[2]

CUHK is the only university in Hong Kong that has produced winner of prizes equivalent to Nobel prize, i.e., Prof. Shing-Tung Yau, holder of the Fields Medal.

CUHK is a trilingual campus; its languages of instruction are English, Cantonese, and Mandarin. The school is also home to the Yale-China Chinese Language Center.

The university's founders hoped that it would become the bridge that connects China and the West, and to combine tradition with modernity.[5]

As a collegiate university, it comprises seven colleges that differ in character and history, each retaining substantial autonomy on institutional affairs: Chung Chi College, New Asia College, United College, Shaw College, Morningside College,[6] S. H. Ho College,[7] and Lee Woo Sing College. All undergraduates are affiliated to one of them.[8] Currently, two new colleges are to be established in the near future; namely Wu Yee Sun College and C. W. Chu College.

Colleges are communities with their own hostels, dining halls and other facilities. Students receive pastoral care and whole-person education, including formal and non-formal general education by means through close interaction with teachers and peers. Colleges promote extracurricular activities.

Science Center in the main campus 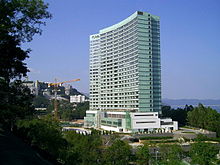 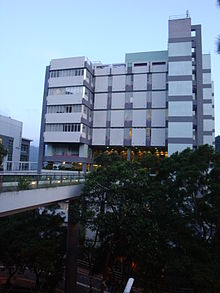 Ho Sin-Hang Building, home to the Faculty of Engineering 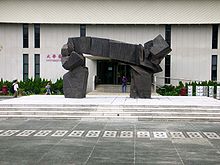 Gate of Wisdom, a 1987 bronze sculpture by Ju Ming,[11] standing outside of the University Library
Main article: Art Museum of the Chinese University of Hong Kong

CUHK also houses the Chinese University of Hong Kong Art Museum, which houses "a wide range of artifacts illuminating the rich arts, humanities and cultural heritage of ancient and pre-modern China."[9] In 2010, The Chinese University of Hong Kong was chosen to be a part of the BBNM Group for its excellence in co-operation projects with the corporate world in Hong Kong.[12] Today, they are represented among the BBNM Member schools.[13]

There are eight faculties at CUHK:

The Yale-China Chinese Language Center (CLC), formerly New Asia - Yale-in-China Chinese Language Center, was founded in 1963 under the joint auspices of New Asia College and the Yale-China Association. The center became part of Chinese University in 1974 and has been responsible for the teaching of one language education (Putonghua and Cantonese) of university students as well as other Putonghua and Cantonese learners. Courses are offered for non-native speakers and for native speakers of Chinese.

Although the campus is located away from the busier districts in Hong Kong, access to campus is easy. The university connects with the other districts of the city via the Mass Transit Railway and the Hong Kong bus system. Buses and trains stop by Chung Chi College.

On 29 May 2010, when the CUHK student union sought to permanently locate a 'Goddess of Democracy' statue on campus, the administrative and planning committee of the University convened an emergency meeting for 1 June, chaired by incumbent Vice-chancellor Lawrence Lau, to consider the request.[14] The application was turned down; the reason provided was the need for the University to maintain political neutrality. Staff and students objected to the refusal, however, accusing the committee of self-censorship; students declared they were prepared for a stand-off against the University, saying they would ensure the statues were accommodated on campus "at all costs".[15]

Students attend an open-air meeting at the university campus

A student meeting was convened, and student union President Eric Lai told 2,000 attendees that the University officials should apologise for their opposition of the art display.[16] On 4 June, bowing to public outcry and student pressure, the University relented, and allowed the statue on campus.[17] 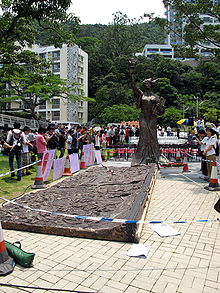 Vice-chancellor designate Joseph Sung, who was consulted on the vote in absentia, admitted that it was the biggest political storm in 21 years. He revealed that, in addition to preserving political neutrality, safety and security concerns were factors in the decision. He also drew a distinction between this application - for a permanent University installation - and hypothetical applications for short-term expressions of free speech, suggesting the latter would have been more likely to be approved, but he criticised the management team as "immature" and "inexperienced" in handling the incident.[14]

An editorial in The Standard criticised the committee's naivety in not anticipating the reaction. It was also highly critical of Sung for seeking to distance himself from the decision with such a "lame excuse".[17] Outgoing Vice-chancellor Lawrence Lau defended the committee's decision as "collective and unanimous" after "detailed consideration," citing the unanimous vote of the administrative and planning committee, and he disagreed with Sung's characterization of the management team. While the vote was unanimous, however, Sung stated that he had suggested the wording of the decision include the qualification that the committee "had not reached a consensus."[18]

The student union said the two professors should have communicated to reach a consensus, and that Lau's reply "failed to explain why the school used political neutrality as a reason to reject the statue."[19]

CUHK has adopted in its Strategic Plan 2006 the strategy of focusing its research investments in five fields of academic enquiry:[21]