Foam
This article is about the substance formed from trapped gas bubbles. For other uses, see Foam (disambiguation). 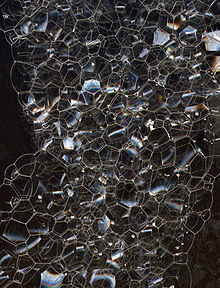 A foam is a substance that is formed by trapping gas in a liquid or solid in a divided form, i.e. by forming gas regions inside liquid regions, leading to different kinds of dispersed media. In general, gas is present in large amount so it will be divided in polydisperse gas bubbles separated by liquid regions which may form films, thinnner and thinner when the liquid phase is drained out of the system [Interface (chemistry)|films]].[1]. When the principal scale is small, id est for fine foam, this dispersed medium can be considered as a type of colloid.

The term foam may also refer to anything that is analogous to such a phenomenon, such as quantum foam, polyurethane foam (foam rubber), XPS foam, Polystyrene, phenolic, or many other manufactured foams. This is not the purpose of this page. 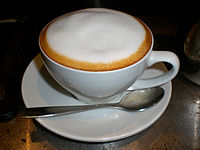 Cappuccinos are topped with a layer of steamed-milk foam.

A foam is in many cases a multiscale system.

One scale is the bubble one: real-life foams are typically disordered and have a variety of bubble sizes. At larger sizes, the study of idealized foams is closely linked to the mathematical problems of minimal surfaces and three-dimensional tessellations, also called honeycombs. The Weaire-Phelan structure is believed to be the best possible (optimal) unit cell of a perfectly ordered foam[citation needed], while Plateau's laws describe how soap-films form structures in foams.

At lower scale than the bubble one, is the thickness of the film for dry enough foams, which can be considered as a network of interconnected films called lamellae. Ideally, the lamellae are connected by three and radiate 120° outward from the connection points, known as Plateau borders. An even lower scale is the one of the liquid-air interface at the surface of the film. Most of the time this interface is stabilized by a layer of amphiphilic structure, often made of surfactants, particles (Pyckering), or more complex associations.

Several conditions are needed to produce foam: there must be mechanical work, surface active components that reduce the surface tension, and the formation of foam faster than its breakdown. To create foam, work (W) is needed to increase the surface area (ΔA):

where γ is the surface tension.

Stabilisation of foam is caused by van der Waals forces between the molecules in the foam, electrical double layers created by dipolar surfactants, and the Marangoni effect, which acts as a restoring force to the lamellas.

Several destabilising effects can break foam down. (i) Gravitation causes drainage of liquid to the foam base, (ii)osmotic pressure causes drainage from the lamellas to the Plateau borders due to internal concentration differences in the foam, while (iii)Laplace pressure causes diffusion of gas from small to large bubbles due to pressure difference. Films can break under disjoining pressure, These effects can lead to rearrangement of the foam structure at scales larger than the bubbles, which may be individual (T1 process) or collective (even of the "avalanche" type).

Being a multiscale system involvng many phenomena, and a versatile mdeium, foam can be studied using many different techniques. Considering the different scales, experimental techniques are diffracion ones, mainly light scattering techniques (DWS, see below, static and dynamic light scattering, X rays and neutron scattering) at submicronic scales, or microscopic ones. Considering the system as continuous, its bulk' properties properties can be characterized by light transmittance but also conductimetry. The correlation between structure and bulk is evidenced more accurately by acoustics in particular. The organisation between bubbles has been studied numerically using sequential attempts of evolution of the minimum surface energy either at random (Pott(s model) or deterministic way (surface evolver). The evolution with time, i.e. the dynamics, can be simulated using these models, but also the bubble model (Durian) which considers the motion of individual bubbles. 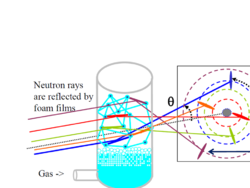 Reflection of radiation by a foam

A typical light scattering (or diffusion) optical technique is multiple light scattering coupled with vertical scanning is the most widely used technique to monitor the dispersion state of a product, hence identifying and quantifying destabilisation phenomena.[2][3][4][5] It works on any concentrated dispersions without dilution, including foams. When light is sent through the sample, it is backscattered by the bubbles. The backscattering intensity is directly proportional to the size and volume fraction of the dispersed phase. Therefore, local changes in concentration (drainage, syneresis) and global changes in size (ripening, coalescence) are detected and monitored.

In some ways, leavened bread is a foam, as the yeast causes the bread to rise by producing tiny bubbles of gas in the dough.

The unique property of gas-liquid foams having very high specific surface area are exploited in the chemical processes of froth flotation and foam fractionation.

Solid foams form an important class of lightweight cellular engineering materials. These foams can be classified into two types based on their pore structure: open-cell-structured foams (also known as reticulated foams) and closed-cell foams.

Open-cell-structured foams contain pores that are connected to each other and form an interconnected network that is relatively soft. Open-cell foams will fill with whatever they are surrounded with. If filled with air, a relatively good insulator is the result, but, if the open cells fill with water, insulation properties would be reduced. Foam rubber is a type of open-cell foam.

From the early 20th century, various types of specially manufactured solid foams came into use. The low density of these foams made them excellent as thermal insulators and flotation devices, and their lightness and compressibility made them ideal as packing materials and stuffings. A modern application of foam technology is aerogel, which is a closed-cell foam with very good insulatory properties, that is also very light. It is usually based on alumina, chromia, and tin oxide, with carbon aerogels first developed in the late 1980s.

A special class of closed-cell foams is known as syntactic foam, which contains hollow particles embedded in a matrix material. The spheres can be made from several materials, including glass, ceramic, and polymers. The advantage of syntactic foams is that they have a very high strength-to-weight ratio, making them ideal materials for many applications, including deep-sea and space applications.[6] One particular syntactic foam employs shape memory polymer as its matrix, enabling the foam to take on the characteristics of shape memory resins and composite materials; i.e., it has the ability to be reshaped repeatedly when heated above a certain temperature and cooled. Shape memory foams have many possible applications, such as dynamic structural support, flexible foam core, and expandable foam fill.[7]

Integral skin foam, also known as self-skin foam, is a type of foam with a high-density skin and a low-density core. They can be formed in an open-mold process or a closed-mold process. In the open-mold process, two reactive components are mixed and poured into an open mold. The mold is then closed and the mixture is allowed to expand and cure. Examples of items produced using this process include arm rests, baby seats, shoe soles, and mattresses. The closed-mold process, more commonly known as reaction injection molding (RIM), injects the mixed components into a closed mold under high pressures.[8]

Foam, in this case meaning "bubbly liquid", is also produced as an often-unwanted by-product in the manufacture of various substances. For example, foam is a serious problem in the chemical industry, especially for biochemical processes. Many biological substances, for example proteins, easily create foam on agitation and/or aeration. Foam is a problem because it alters the liquid flow and blocks oxygen transfer from air (thereby preventing microbial respiration in aerobic fermentation processes). For this reason, anti-foaming agents, like silicone oils, are added to prevent these problems. Chemical methods of foam control are not always desired with respect to the problems (i.e., contamination, reduction of mass transfer) they may cause especially in food and pharmaceutical industries, where the product quality is of great importance. In order to prevent foam formation, in such cases mechanical methods are mostly dominant over chemical ones.

An assumption that the speed of sound based on the fluid properties of the liquid will lead to errors in calculating fatigue cycles to failure of mechanical hydraulic components. Using acoustical transducers and related instrumentation that set low limits (0 - 50,000 Hz with roll-off) will result in errors. The low roll-off during measurement of actual frequency of acoustic cycles results in miscalculation due to actual hydraulic cycles in the possible ranges of 1-1000 MHz or higher. Instrumentation systems are most revealing when cycle bandwidths exceed the actual measured cycles by a factors of 10 to 100. Associated instrumentation costs also increase by factors of 10 to 100. 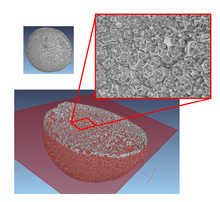