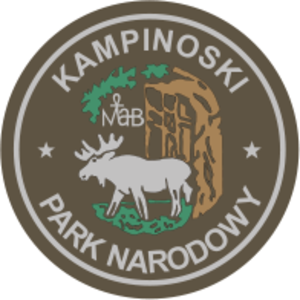 Kampinos National Park ( _pl. Kampinoski Park Narodowy) is a National Park in east-central , in , on the north-west outskirts of . It has a sister park agreement with , , .

The idea of creating a park here appeared for the first time in the 1920s. In the 1930s the first forest reserves were opened: , and . Today, these reserves are much larger and are strictly protected.

The park was created in 1959, covering a total area of convert|407|km2|sqmi. It covers the ancient ("Puszcza Kampinoska"), and in January 2000 the area was added to ’s list of s. The Park is now slightly smaller than originally, covering convert|385.44|km2|sqmi, of which 46.38 km² is strictly protected. The protective zone around the Park covers 377.56 km². Forests account for around 70% of the park’s area, and most the common tree is the . The Park’s symbol is the .

Kampinoski National Park is located at the biggest river junction in Poland - here valleys of , Bug, , and meet together. There are no lakes, the biggest river of the Park is the , a tributary to the Bzura, which acts as a water canal.

Park’s is rich with around 1245 species of plants, of which 69 are protected. Park’s landscape is a mix of sand s and lands with pine trees growing on sand and meadows on swamps.

The Park, together with nearby valley of the Vistula, is an important thriving area of many animals. According to biologists, there are 16,000 species of animals, of which the most numerous are insects (2 030 species) and birds (200 species). Park’s experts are experienced in the field of reintroducing several animals - (since 1951), (since 1980) and (since 1992). 83 species of animals are regarded as endangered.

The park’s area has rich history, here many important events connected with Polish history took place. Reminders of past are numerous and include tombs of insurrectionists from 1863 anti-Russian uprising, war cemeteries from Polish-German war of 1939 and tombs of members of anti-German resistance (1944-45). At the cemetery lay many inhabitants of Warsaw, secretly killed here by the Germans in the years 1939-1945. At on the outskits of the Park there is a manor house where famous composer was born.

Tourists are welcome on Park’s walking, cycling and skiing trails. One can also rent a horse and ride on trails whose total length is around 360 kilometers. Cycling enthusiasts may take advantage of the 200 km Kampinos Cycling Trail.

* [http://kampinoski-pn.gov.pl/ Official website]
* [http://www.mos.gov.pl/kzpn/en/kamp_gb.htm The Board of Polish National Parks]