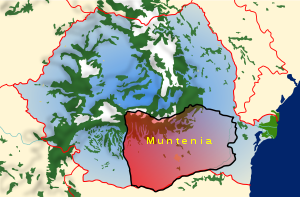 Map of Romania with Muntenia highlighted

Muntenia (Romanian pronunciation: [munˈteni.a], also known in English as Greater Wallachia) is a historical province of Romania, usually considered Wallachia-proper (Muntenia, Țara Românească, and the seldom used Valahia are synonyms in Romanian). It is situated between the Danube (south and east), the Carpathian Mountains (the Transylvanian Alps branch) and Moldavia (both north), and the Olt River to the west.[1] The latter river is the border between Muntenia and Oltenia (or Lesser Wallachia). Part of the traditional border between Wallachia/Muntenia and Moldavia was formed by the rivers Milcov and Siret. 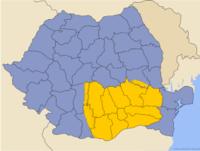 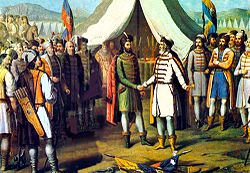 and parts of three others:

Romania's capital city, Bucharest, is situated in Muntenia. Other important cities are: