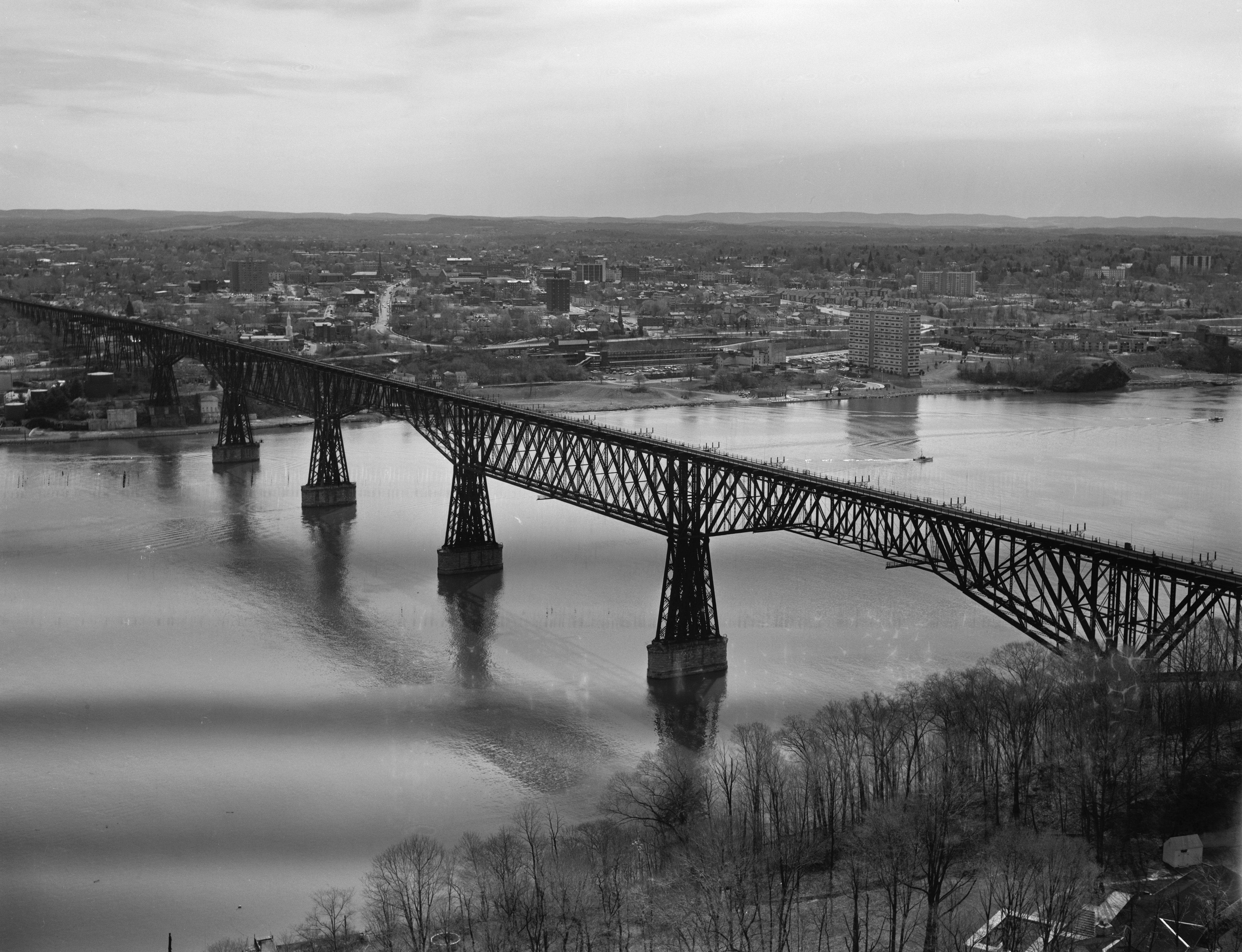 The Poughkeepsie Bridge (sometimes known as the "Poughkeepsie Railroad Bridge", the "Poughkeepsie-Highland Railroad Bridge" or the "High Bridge") is a single track railway bridge spanning the between on the east bank and Highland, New York on the west. It was completed on January 1, 1889, and went out of service on May 8, 1974. It was listed on the in 1979, updated in 2008. [ [http://www.nps.gov/history/nr/listings/20080530.HTM New listing] ] It is expected to reopen in 2009 as a pedestrian bridge.

Planning for a Hudson crossing bridge began before the Civil War. Over the years, many plans had been made for a across the south of Albany to replace the numerous operations. One of the most persistent was originally chartered in 1868 as the , and would have crossed from Anthony's Nose to Fort Clinton, now roughly the site of the . This proposed bridge was never built.

The was chartered in June 1871 to build the bridge, and of the was persuaded to support the effort. Contracts were let to a firm called the American Bridge Company (not the company of the same name founded later), but the intervened and the scheme collapsed.

In 1886, the was organized to finance the construction. Among the prominent backers was , the coal tycoon and associate of . The of , which had completed the Michigan Central cantilever bridge at Niagara (see ), was subcontracted to build the Poughkeepsie structure. Dawson, Symmes and Usher were the foundation engineers, while John F. O'Rourke, P. P. Dickinson and Arthur B. Paine were the structural engineers. The bridge was designed by and . As is typical for s, construction was carried out by constructing cribwork, masonry piers, towers, fixed sections on falsework, and finally cantilever sections, with the final cantilever interconnection spans (if used) floated out or raised with .

The first train crossed the bridge on , .

The bridge was considered an engineering marvel of the day and has six main spans. The total length is convert|6767|ft|m, including approaches, and the deck is convert|212|ft|m above water. It is a multispan , having three river-crossing cantilever spans of convert|525|ft|m, two anchor spans of convert|525|ft|m, convert|2200|ft|m|sing=on shore spans and a 2,654 approach span on the eastern bank, as the eastern bank is lower than the western side, which has bluffs in that area. It formed part of the most direct rail route between the industrial northeastern states and the midwestern and western states.

The bridge remained as the main crossing south of Albany until the construction of the in 1924, and was advertised as a way to avoid congestion (see the article for more information). Due to the changes in ownership of railways, the bridge was nominally owned by many different lines, including (CNE), (NH), and (PC) among others.

The bridge's importance was severely reduced in 1960 when the system was created; the larger railroad consolidated most freight routes on its own trackage. When the System was created by merger in 1968, it also preferred a different route, using its Selkirk Yard and the West Shore Line.

With the 1970 bankruptcy of Penn Central, the , which fed vital through traffic to the "Maybrook Line" at Maybrook Yard, NY, similarly entered receivership. On May 8, 1974, the Poughkeepsie Bridge suffered a fire that damaged the bridge decking: reported shortly after an eastbound freight train had crossed, with the fire confined to the eastern viaduct over the City of Poughkeepsie. Penn Central had totally neglected the bridge's fire-protection system, which had no water on the day of the fire, while firing watchmen who had previously kept watch for such fires. In 1976, after two years of abandonment, Senator Abraham Ribicoff (D.-Conn.) forced Conrail to acquire the former New York, New Haven & Hartford "Maybrook Line" from Maybrook Yard, NY to New Haven, CT, including the Poughkeepsie Bridge. However, Conrail then refused to spend anything to repair the 1974 fire damage. On November 2, 1984, after 10 1/2 years of abandonment, the railroad sold the bridge for $1 to a convicted-felon bank swindler named Gordon Schreiber Miller, of St. Davids, PA, to "get it off the books." (Incredibly, this was the personal decision of then-Conrail Chairman L. Stanley Crane, who imposed no sale conditions requiring liability insurance or maintenance.) On June 4, 1998, following Miller's and his successor Vito Moreno's nonpayment of Ulster and Dutchess County taxes on the bridge, Moreno deeded it to The Poughkeepsie-Highland Railroad Bridge Company, Inc., a New York nonprofit corporation. The deeds were recorded in both Counties on June 5, 1998. This corporation will deed the bridge to the appropriate New York State entity by CY2009, for the new rail-trail project which will feature the bridge as its centerpiece. [ "Bridging The Hudson: The Poughkeepsie Railroad Bridge and Its Connecting Railroad Lines", by Carleton Mabee (Purple Mountain Press, Fleischmanns, NY: 2001) ]

Today, the span is closed to the public. On May 30, 2008, ground was formally broken for the Bridge's reconstruction. In late July, 2008, construction crews were busy removing the rails, ties and track decking from the bridge, as the first stage in its $25+ million conversion to a walkway over the Hudson River, which will become part of a rail trail from Hopewell Junction to the vicinity of Maybrook, NY.

The project has been separated into four phases: [cite web |url=http://walkway.org/phases.htm |title=Phases |accessdate=2007-06-06]

* Phase 1 - attain ownership of the bridge. This phase is complete.
* Phase 2 - do a structural analysis of the bridge and to use it to generate a comprehensive plan, including budget and timeline for completion. The group also has to find funding for the project and secure funding for the start of construction. This phase is complete.
* Phase 3 - construct and open the first convert|1800|ft|m of the walkway on the Ulster side. The Dutchess side will get an elevator and convert|900|ft|m of walkway. This phase is underway.
* Phase 4 - construct the remaining convert|4000|ft|m of the walkway and a connection to the in Highland and the in Poughkeepsie.

Currently in the third phase, Walkway hopes to open the bridge by 2009, in time for the Hudson Quadricentennial Celebration. [cite news| title=New vision for old Hudson span | publisher=Times Union | date=2008-02-17 | last=VARUGHESE | url=http://timesunion.com/AspStories/story.asp?storyID=664518&category=REGIONOTHER&BCCode=&newsdate=2/17/2008&TextPage=1] . The piers have been inspected and given a clean bill of health, and the decking is going down.

Upon the restoration completion, the bridge will become the longest elevated public park in the world. Walkway will hand the bridge over to the New York State Office of Parks, Recreation and Historic Preservation.

*
* [http://www.railsandtrails.com/Prospectus/PoughkeepsieBridge/index.htm Bridging the Hudson at Poughkeepsie] 1871 Bridge Prospectus
* [http://www.catskillarchive.com/rrextra/pbsa.Html CatskillArchive.com copy] of article of February 5, 1887 (written during construction) has data on steel strength and testing