Scleroderma
This article is about the disease. For the mushroom, see Scleroderma (genus). Not to be confused with the skin disease scleredema.

Scleroderma is a chronic systemic autoimmune disease (primarily of the skin) characterized by fibrosis (or hardening), vascular alterations, and autoantibodies. There are two major forms:

Limited systemic sclerosis/scleroderma involves cutaneous manifestations that mainly affect the hands, arms and face. Previously called CREST syndrome in reference to the following complications: Calcinosis, Raynaud's phenomenon, Esophageal dysfunction, Sclerodactyly, and Telangiectasias. Additionally, pulmonary arterial hypertension may occur in up to one third of patients and is the most serious complication for this form of scleroderma.

Diffuse systemic sclerosis/scleroderma is rapidly progressing and affects a large area of the skin and one or more internal organs, frequently the kidneys, esophagus, heart and lungs. This form of scleroderma can be quite disabling. There are no treatments for scleroderma itself, but individual organ system complications are treated.[1][2]

Other forms of scleroderma include systemic sine scleroderma, which lacks skin changes, but has systemic manifestations, and two localized forms which affect the skin, but not the internal organs: morphea, and linear scleroderma.

The cause is unknown. Scleroderma runs in families, but the genes have not been identified. It affects the small blood vessels (arterioles) in all organs. First, the endothelial cells of the arteriole die off, along with smooth muscle cells, by a process of apoptosis. They are replaced by collagen and other fibrous material. Inflammatory cells, particularly CD4+ helper T cells, infiltrate the arteriole, and cause further damage. Many of the inflammatory and destructive protein signals have been identified, and they are potential targets for drugs that could interrupt the process.[1]

Scleroderma is characterized by the appearance of circumscribed or diffuse, hard, smooth, ivory-colored areas that are immobile, and which give the appearance of hidebound skin, a disease occurring in both localized and systemic forms:[4] 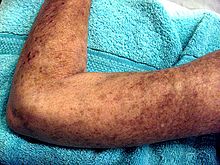 Typical scleroderma is classically defined as symmetrical skin thickening, with about 90% of cases also presenting with Raynaud's phenomenon, nail-fold capillary changes, and antinuclear antibodies. Patients may or may not experience systemic organ involvement. Atypical scleroderma may show any variation of these changes without skin changes or with finger swelling only.[5][6] Additional symptoms of scleroderma typically present themselves within two years of Raynaud's phenomenon.[7]

Severe complications from scleroderma include:

There is no direct cure for scleroderma. Because the exact cause is unknown, any treatment is patient-specific and aimed at ameliorating symptoms of the disease. For example, patients who experience Raynaud's phenomenon may be treated with agents to increase blood flow to the fingers, including nifedipine, amlodipine, diltiazem, felodipine, or nicardipine.

Fibrosis of the skin has been treated with varying degrees of success with agents such as D-penicillamine, colchicine, PUVA, relaxin, and cyclosporine.

Because scleroderma is an autoimmune disease, one of the major pillars of treatment involves the use of immunosuppressive agents. These drugs include methotrexate, cyclophosphamide, azathioprine, and mycophenolate.[9][10]

Individuals with morphea or limited scleroderma have a relatively positive outlook. They will usually die from from natural causes or another disease perhaps, but not from the scleroderma. Those with very widespread skin and organ involvement (systemic) have a negative prognosis. More women have scleroderma, but the disease kills more men. Following diagnosis, two-thirds of patients live at least 11 years. The higher the patient's age at diagnosis, the more likely they are to die from the disease.

People with scleroderma have very different life expectancies. Some—for example, those with limited or mild diffuse disease—can expect to live 20 to 50 years after diagnosis, just like anyone else. Others with severe, rapidly progressive disease—a group which makes up less than 10% of the total number of patients with diffuse scleroderma—might have a 50% chance of a five-year survival.[13]

This disease is found among all races worldwide, but women are four times more likely to develop scleroderma than men. In the United States, approximately one person in 1,000 is affected. Children rarely suffer the systemic type, but localized scleroderma is common. Most adults are diagnosed after their 30th birthday and before age 50. The disease has high rates among the native American Choctaw tribe and African American females.[7]

Cases of skin disease similar to scleroderma may be found in the writings of Hippocrates as far back as 460–370 B.C. Oribasius (325–403 A.D.) and Paulus Agineta (625–690 A.D.) also wrote on the subject. It is difficult to know if these were truly examples of scleroderma because the descriptions were inexact.

The first definite description of the disease, by Carlo Curzio in a monograph published in Naples in 1753, produced considerable interest in French and English medical circles.

The account concerns a young woman of 17 named Patrizia Galiera, who was admitted to the hospital and assigned to Dr. Curzio. Her symptoms as described by the doctor involved hardness of the skin (differing in degree from place to place), tightness around the mouth, and hardness around the neck. He noted loss of warmth in the skin, but no other problem in pulse, respiration, or digestion.

Much of the report contains details of the treatment, which included warm milk and vapor baths, bleeding from the foot, and small doses of quicksilver (mercury). After 11 months, the skin became soft and flexible, and all natural functions were restored.