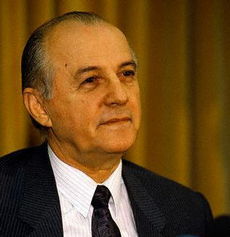 Alia was born in 1925 and had joined the Albanian communist movement before he was twenty years old. He had risen rapidly under Hoxha's patronage and by 1961 was a full member of the ruling Political Bureau () of the (APL). Hoxha chose Alia for several reasons. First, Alia had long been a militant follower of and supported Hoxha's policy of national self-reliance. Alia also was favored by Hoxha's wife Nexhmije, who had once been his instructor at the Institute of Marxism-Leninism. Alia's political experience was similar to that of Hoxha; and inasmuch as he appeared to share Hoxha's views on most foreign and domestic issues, he easily accommodated himself to the totalitarian mode of ruling. That he had managed to survive several waves of extensive purges bespoke his political prowess and capacity for survival.

When Alia took over as first secretary of the APL, the country was in grave difficulty. Political apathy and cynicism were pervasive, with large segments of the population having rejected the government's values. The economy, which suffered from low productivity and permanent shortages of the most basic foodstuffs, showed no sign of improvement. Social controls and self-discipline had eroded. The was beginning to resist strict party controls and to criticize the government's failure to observe international standards of human rights. Apparently recognizing the depth and extent of the societal malaise, Alia cautiously and slowly began to make changes in the system. His first target was the economic system. In an effort to improve economic efficiency, Alia introduced some economic decentralization and price reform in specific sectors. Although these changes marked a departure from the Hoxha government, they did not signify a fundamental reform of the economic system.

Alia did not relax censorship, but he did allow public discussions of Albania's societal problems and encouraged debates among writers and artists on cultural issues. In response to international criticism of Albania's record on human rights, the new leadership loosened some political controls and ceased to apply repression on a mass scale. In 1986 and 1989, general amnesties brought about the release of many long-term prisoners. Alia also took steps to establish better ties with the outside world, strengthening relations with , , , and Yugoslavia. A loosening of restrictions on travel and tourism resulted in a more promising outlook for Albania's tourist trade.

Transition to democracy and presidency

By the late 1980s, Alia was supporting a campaign for more openness in the press and encouraging people to talk freely about Albania's problems. As a result, controversial articles on a range of topics began to appear in the press. Not everyone, however, was happy with Alia's cautious program of reform. The entrenched party bureaucrats were worried that they would lose their powers and privileges and hence resisted many of the changes. Thus Alia's government was not able, or willing, to attempt changes that would put an end to the repressive elements of the system.

Despite Alia's efforts to proceed with change on a limited, cautious basis, reform from above threatened to turn into reform from below, largely because of the increasingly vocal demands of Albania's youth. On , , student demonstrators marched from the Enver Hoxha University (now ) at through the streets of the capital shouting slogans and demanding an end to . By , the number of participants had reached almost 3,000. In an effort to quell the student unrest, which had led to clashes with riot police, Alia met with the students and agreed to take further steps toward . The students informed Alia that they wanted to create an independent political organization of students and youth. Alia's response was that such an organization had to be registered with the Ministry of Justice.

In his traditional New Year's message to the Albanian people, Alia welcomed the changes that had been occurring in the country and claimed that 1991 would be a turning point in terms of the economy. But despite positive signs of change, many Albanians were still trying to leave their country. At the end of 1990, as many as 5,000 Albanians crossed over the mountainous border into Greece. Young people motivated by economic dissatisfaction made up the bulk of the refugees.

In many respects, Alia was a political survivor. He had managed to remain a key political figure throughout several political crises. Although he had some genuine concerns for stability and continuity, he was not inflexible. He changed in response to the circumstances and accommodated the demands of the reformers. Nonetheless, with Albania in the throes of a grave economic crisis, Alia had to face challenges that he could not surmount. After the collapse of the coalition government in December 1992 and the 's (ADP) landslide victory in the spring 1992 general election, he resigned as on , . On , the People's Assembly elected ADP leader as Albania's new head of state.

* [http://lcweb2.loc.gov/frd/cs/ Country Studies On-Line] at the