Mansa, Zambia
This article is about the town in Zambia. For other uses, see Mansa (disambiguation). 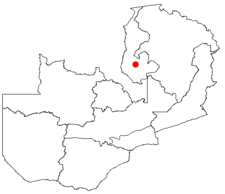 Mansa is the capital of the Luapula Province of Zambia, and headquarters of Mansa District. It takes its name from the local Chief Mansa and the small Mansa River which flows west to the Luapula River. During British rule the city was named Fort Rosebery.

In a province of beautiful rivers, waterfalls, lakes and wetlands, Mansa serves administrative and commercial functions, being situated on a relatively featureless plateau between the Luapula River to the west and Lake Bangweulu to the east. It does have the merit of being reasonably well located at the crossroads of the Copperbelt-Congo Pedicle-Chembe-Kawambwa road running south to north (partly paved), and the Serenje-Samfya-Luapula Valley road (all paved) running south-east to north-west. The main highway to the Northern Province via Luwingu branches off the Kawambwa road north of Mansa, and is paved near Kasama.

In colonial times Mansa was called Fort Rosebery and was also the headquarters of the province. The first Fort Rosebery, however was situated in the Luapula Valley around 1900, where most of the province's population live, near Mambilima. After an outbreak of sleeping sickness in the valley some years later it was moved to the present site in the belief that the higher plateau site would be more healthy.

The Luapula Province developed in the mid-20th century on the supply of fish, agricultural produce and labour to Zambia's industrial centre, the Copperbelt, and Mansa developed with it as an administrative and distribution centre. 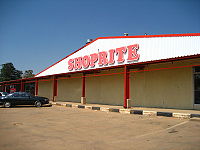 Over the last twenty years the town has grown considerably in population but not in prosperity since a decrease in employment in the mines of the Copperbelt forced a return to the land in areas such as the Luapula Province. Mansa lacks industries since the battery factory closed in 1994, and in the absence of employment opportunities, chitemene (a form of subsistence farming) has degraded the surrounding woodlands appreciably. Nevertheless, as a commercial hub serving the whole province, the town is home to a daily market, banks, warehouses, a number of large stores and dealers, and a Shoprite supermarket.

Proximity to the Congo

Although only 50 km east from the Democratic Republic of the Congo, and cut off from the Copperbelt by the Congo Pedicle, Mansa does not have direct trade links to that country. Wars and frequent conflict in the Congo over the past fifty years have frequently hindered the development of Mansa. The Luapula which forms the border is crossed by a passenger ferry to the north-west at Kasenga, and by a vehicle ferry to the south at Chembe, but this connects through Congolese territory via Zambia's notorious and frequently impassable Congo Pedicle road only to the Copperbelt. Other roads on the Congolese side are severely degraded, consequently some Congolese trade passes on Zambian roads through Mansa, such as the output of the Dikulushi Copper Mine west of Lake Mweru. Otherwise, trade with the Congo is restricted to local produce and smuggling across the river.

Mansa has a paved airstrip (MNS) and is serviced twice a week by Proflight Zambia. Public transport is restricted to buses traveling between towns on the main highways listed above. With peace in the Congo, a bridge is under construction across the Luapula at Chembe to by-pass the ferry. Subsequent paving of the Pedicle Road will do much to improve Mansa's access to the Copperbelt, and may also increase trade between Kasama and the Copperbelt.

One of the mining companies operating in Mansa is Genesis Procurement Limited,Genesis Procurement is duly a member of the Genesis Group of Companies and is involved into Mining activities, the company is mining Manganese in the capital town Mansa of Luapula Province, this company operates out of South Africa as well as Zambia. It has two divisions in Zambia.

The mining division is involved in the procurement, mining and export of minerals. The company is a major supplier to Gfe MIR which is one of the largest mineral procurement companies in the world.

The division employs over 200 people and owns earth moving equipment and vehicles worth approximately $2,000,000.

The Procurement division is involved in sourcing and procurement of commodities for all sectors of the economy.

See more details on this url at http://www.genesis-group.biz