Ensign of the United States

Ensign of the United States 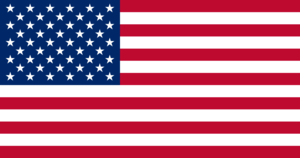 The ensign of the refers to the when worn as an (a type of identifying nationality, usually flown from the stern of a ship or boat). [ [http://mysite.verizon.net/vzeohzt4/Seaflags/ensign/Ensign.html#top "National Colors"] , by Joseph McMillan; from Sea Flags. Retrieved , .] All documented U.S. vessels, and all U.S. vessels in international or foreign waters, are required to display this ensign between 08:00 and sunset. Other U.S. vessels may use this ensign at their discretion.

Some other flags are often used as “civilian” or “yacht” ensigns in place of the national flag by small boats in United States waters; however this practice has no specific support in American law.

The naval ensign and its first salute

The was the "de facto" first U.S. . It was first raised aboard Commodore ' flagship "Alfred" on the on , ; , then the ship's senior lieutenant, personally claimed this honor.

The current "Stars and Stripes" design was first adopted when the Marine Committee of the Second Continental Congress passed the Flag Resolution of , : "Resolved, That the flag of the United States be thirteen stripes, alternate red and white; that the union be thirteen stars, white in a blue field, representing a new Constellation."

was the first country to salute the Grand Union flag, when by American ships were returned by officials on Dutch islands in the in late 1776: on in October, and on St. Eustatius in November. (Though later, the better documented St. Eustatius incident involving the USS "Andrew Doria" is traditionally regarded as the "first salute".) was the first country to salute the Stars and Stripes, when a fleet off the French mainland returned a gun salute by Captain commanding USS "Ranger" on , . [http://www.history.navy.mil/faqs/faq40-1.htm]

The United States Coast Guard flies a unique ensign to show that it has the authority to stop, board, examine, and seize vessels. It was designed by Secretary of Treasury Oliver Wolcott and was first flown in 1799.

Information about early U.S. s is scant, but there is evidence that at the time of the U.S. merchant ships flew a horizontally striped flag of 13 alternating red and white stripes. [ [http://www.history.navy.mil/faqs/faq122-1.htm "The U.S. Navy's First Jack"] , dated , by the Naval Historical Center. Retrieved , .] These flags with vertical strips are similar to ones flown by the [http://www.crwflags.com/fotw/flags/us-librt.html] (Such ensigns may also have served as early U.S. naval jacks in conjunction with the used as a .) In the early years of the United States, ensigns were not yet standardized, leading to number of known variations, such as the Serapis ensign used by .

A special flag, looking like the national flag and ensign but with a fouled in a circle of stars in the canton, was created in 1848 as a signal flag to be used by U.S. yachts. This was not intended to be an ensign, but was intended to be used as a by a yacht to declare itself exempt from customs duties. However, many boaters started using this as an ensign, and eventually the government announced that they would accept this practice for boats in United States waters; but the national flag was still the only ensign allowable in international or foreign waters.

The existence of the Yacht Ensign in United States law (46 U.S.C. section 109) was repealed by the Vessel Documentation Act of 1980 (Public Law 96&ndash;594). This leaves the national flag as the only allowable ensign for United States yachts (and other vessels). Nevertheless, the old yacht ensign is still widely used by boaters continuing a tradition which dates back to the nineteenth century. This is a legal option for undocumented vessels in United States waters, which are not required to wear an ensign. [ [http://mysite.verizon.net/vzeohzt4/Seaflags/yachting/Yachting.html "Yachting Flags"] , by Joseph McMillan; from Sea Flags. Retrieved , .] [FOTW|id=us~yte|title=Yacht Ensign (U.S.). Retrieved , .] The states of , [ [http://www.sos.arkansas.gov/educational_ar_flag.html "Protocol For The Arkansas State Flag"] from [http://www.sos.arkansas.gov/ Arkansas Secretary of State website] . Retrieved , .] , [ [http://www.sos.state.md.us/Services/flagprotocol.htm "Protocol for Maryland's Flag"] from [http://www.sos.state.md.us/ Maryland Secretary of State website] . Retrieved , .] and [ [http://www.secstate.wa.gov/flag/boats.aspx "Use of the U.S. Ensign and Washington State Flag on Recreational Boats"] from [http://www.secstate.wa.gov/ Washington Secretary of State website] . Retrieved , .] have each adopted flag protocols which provide that the U.S. ensign "and the U.S. Yacht Ensign, with a canton of 13 stars, are interchangeable on all types of recreational vessels while in national waters." Similarly, the [http://www.usps.org/f_stuff/etiquett.html#us-y-ensign United States Power Squadrons' guide to flags and flag etiquette] , prepared in consultation with the Coast Guard, Coast Guard Auxiliary, , and others, provides that the flag may be flown on recreational boats of all types and sizes instead of the national ensign in domestic waters.

The is a non-profit organization for power boaters in the United States. It has its own flag to identify the organization; this flag may be worn as a signal flag (ie. on the signal hoist, typically in the starboard rigging). Despite its name it has no standing as a national ensign; however, some boaters incorrectly wear this flag in place of their national ensign. [FOTW|id=us~usps|title=Power Squadron Flags (U.S.). Retrieved , .]