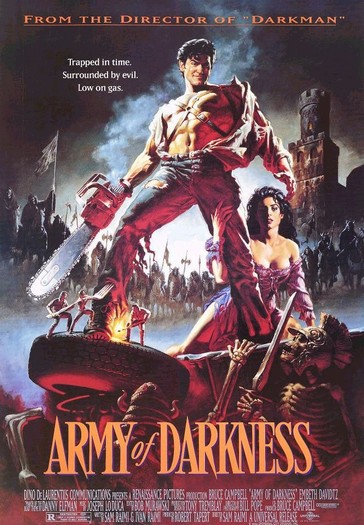 "Army of Darkness" (aso known as Evil Dead III : Army of darkness) is an American / adventure film, released in 1993. The film is a sequel to "" and "". "Army of Darkness" was directed by , written by Raimi and his brother Ivan, produced by , and starring once again as protagonist . Despite being a sequel to the two "Evil Dead" films, it is not as violent or gory, relying more on .

The movie had a considerably higher budget than the prior two "Evil Dead" films. The budget was estimated to be around $11 million; "Evil Dead II" had a budget of $3.5 million and "The Evil Dead" a budget of $350,000. At the box office, "Army of Darkness" was not a big success, barely making back its budget with a gross of $11.5 million domestically. After its video release, however, it has obtained an ever-growing cult following, along with the other two films in the trilogy. "Army of Darkness" was more well known than "The Evil Dead" and its sequel.

Picking up where left off, Ash narrates how he and his girlfriend Linda (played by in a very brief cameo), both supermarket clerks at an S-Mart retail store, went for a vacation in the woods to an old cabin and they discovered the book [The Necronomicon was originally created by horror writer , who wrote an entire history for the forbidden book. [http://mythostomes.com/index.php?option=com_content&task=view&id=12&Itemid=70] ] , or "Book of the Dead" and upon reading it, unleashed demonic forces as detailed in the previous films "The Evil Dead" and "Evil Dead II". After reading a spell to defeat the demons, Ash is sucked into a time vortex with his and is transported back to the Middle Ages. The end of "Evil Dead II" shows Ash being hailed as the "Hero from the Sky", the man destined to deliver salvation to mankind from the "Deadites", or those possessed by the evil demons the people called back then.

There are some differences between the ending of "Evil Dead II" and the beginning of "Army of Darkness". In this movie, instead of being praised, Ash is at first suspected of being one of Duke Henry's men, a Scot at war with the English who found Ash. He is enslaved, his gun and chainsaw confiscated, and is taken to a castle. A priest keeps Ash's weapons, believing the "strange one" to be a redeemer, foretold in prophecy to be the one who shall deliver mankind from the terror of the Deadites. Ash is thrown in a pit where he fights off a Deadite, regains his weapons, and uses his "boomstick", a Remington double-barreled shotgun, to frighten the inhabitants of the kingdom into helping him return to his own time.

The only way to return to his time and stop the Deadites, according to the priest who gave Ash back his weapons, is to retrieve the Necronomicon - which contains both spells. Ash is supposed to speak a mysterious phrase when he takes the Necronomicon. ["", a reference to the classic film "The Day the Earth Stood Still". However, the phrase as spoken in "The Day the Earth Stood Still" is "Klaatu barada nikto." Ash repeats it as "Klaatu varata nicto", straying even further from the original. Warren, pg. 239. ] While preparing for this, Ash becomes romantically involved with a local woman, Sheila.

Ash then journeys for the Necronomicon, along the way passing into a haunted forest. An unseen force (the camera presenting its point of view) pursues Ash through the woods. Fleeing, Ash ducks into a windmill where he crashes into a mirror. The small reflections of Ash climb out from the shattered mirror and torture him. After knocking him unconscious and tying him down, one of the little Ashes dives down his throat. Ash attempts to kill the little Ash by drinking boiling water, but before any effect can be assumed, "" begins to split off from his right shoulder. Ash panics and runs back out through the woods, where Evil Ash completely splits off of him. Ash shoots Evil Ash in the face, slices him to bits with his chainsaw, and buries him.

When he arrives at the book's location, he sees three books instead of one. After a painful experience with the two fake books (one had bit him and the other one sucked him into the book), Ash finds the real one. He attempts to say the magic phrase, but realizes he forgot the end of it. Ash tries to trick the book by mumbling the missing word, but that re-releases the Evil Dead. He simply grabs the book and rushes back to the castle, while the dead rise from graves all around. During Ash's panicked ride back, Evil Ash rises from his grave and unites the Deadites into the Army of Darkness.

Despite causing the predicament faced by the Medieval humans, Ash initially demands to be returned to his own time. Sheila is captured by a flying Deadite, and then by Evil Ash. Ash becomes determined to lead the humans against the skeletal Deadite army. Reluctantly, the people agree to join Ash. Using scientific knowledge from textbooks in the trunk of his , plus enlisting the help of Duke Henry (whom Ash saved after his conflict in the pit), Ash successfully leads the humans to defeat the Deadites and save Sheila. After this, he is brought back to his own time using a potion made from the book.

The final scene begins with Ash back at the S-Mart store, telling a co-worker all about his adventure back in time, and how he could have been king. After this, a deadite starts wreaking havoc on the store, and Ash defeats it. The film ends with Ash saying, "Hail to the king, baby", and kissing a female employee.

Plans to make a third "Evil Dead" film had been circulating for a number of years, even prior to the production of "".

Initially, Raimi invited to co-write "Army of Darkness" because he had done a good job on "Evil Dead II", but he was busy on rewrites for the film, "".

The initial budget was $8 million but during pre-production, it became obvious that this was not going to be enough. "Darkman" was also a financial success and De Laurentiis had multi-picture deal with Universal and so "Army of Darkness" became one of the films. The studio decided to contribute half of the film's $12 million budget.

Principal photography took place between soundstage and on-location work. "Army of Darkness" was filmed in and Vasquez Rocks Natural Area Park. The interior shots were filmed on an Introvision stage in . Raimi's use of the Introvision process was a tribute to the work of .

It was a difficult shoot for Campbell who had to learn elaborate choreography for the battle scenes, which involved him remembering a number system because the actor was often fighting opponents that were not really there.

, who composed the score for "Darkman", wrote the "March of the Dead" theme for "Army of Darkness",

While gave Raimi and his crew freedom to shoot the movie the way they wanted, Universal Pictures took over during post-production.

In addition, Raimi needed $3 million to finish his movie, but Universal was not willing to give him the money and delayed its release because they were upset that De Laurentiis would not give them the rights to the character so that they could film a sequel to Jonathan Demme's "The Silence of the Lambs".

For the movie's poster, Universal brought Campbell in to take several reference head shots and asked him to strike a "sly look" on his face. They showed him a "rough of this -like painting. The actor had a day to approve it or, as he was told, there would be no ad campaign for the film.

"Army of Darkness" was released by Universal Pictures on , in 1,387 theaters in the United States, grossing $4.4 million (38.5% of total gross) on its first weekend. In total, the film earned $11.5 million in the US

"Army of Darkness" was well received by critics with a 78% fresh on , which made its critical reception above average but is slightly lower than "The Evil Dead" and "Evil Dead II", which received 100% and 98% critical approval, respectively. gave the film two out of four stars and wrote, "The movie isn't as funny or entertaining as "Evil Dead II", however, maybe because the comic approach seems recycled".

"Army of Darkness" won the Academy of Science Fiction, Fantasy & Horror Films Award (USA) for Best Horror Film (1994). It was also nominated for Best Make-Up. "Army of Darkness" was nominated for the Grand Prize at Avoriaz Fantastic Film Festival, and won the Golden Raven at the Brussels International Festival of Fantasy Film in 1993. The film also won the Critics' Award at Fantasporto, and was nominated for the International Fantasy Film Award in the category of Best Film in 1993.

There are four different versions of Army Of Darkness - the 96-minute Director's Cut, the 81-minute U.S. Theatrical Version, the 88-minute International edit, and the 88-minute U.S. Television version. The runs at 96 minutes compared to the theatrical 81 minutes, and includes numerous new scenes and extensions. Among the changes are more violence in the pit, a love scene between Ash and Sheila, an extended windmill scene, different dialogue between Good and Bad Ash, an extended speech on the castle roof and a vastly different ending. The International cut is basically a shorter version of the Director's Cut, albeit with the "happier" ending and repositioned arrival of Henry The Red as in the theatrical version, and was the version released in cinemas outside the US. The Television edit, premiered in 1997 and most commonly shown on the Sci-Fi Channel in America, is most notable for featuring two extended scenes not included in the other three versions, though they are included in a different, rougher format in the deleted scenes section of the DVD. (In the Television version, the scenes are finished and include music.)

The theatrical release picks up after Ash has returned to the present, in which he stages one final confrontation with the "she-bitch" in the S-Mart Housewares Department. The alternate ending, which was favored by Raimi and , depicts Ash as he sits in his in a cave, the entrance caved in by some of the black powder he made earlier. As he drinks the magic potion (given to him by a person that may or may not be - the king's name being "Arthur"), he is distracted by a falling rock and takes one drop too many. Ash sleeps well beyond his time, not aging but growing a very large beard, and shouts "I've slept too long!!" after awakening in a post-apocalyptic .

When test audiences didn't approve of Raimi's original cut, he cut the film down to the International cut that now exists on . When it was again rejected by Universal, Raimi was forced to edit it again to the U.S. Theatrical version. The original cut had an opening that was more in tune with the "Evil Dead" series (included as a deleted scene on Anchor Bay's Director's Cut ). [Sam Raimi. DVD audio commentary.]

The edits together the U.S. Theatrical, an and Director's cuts into a final, 96-minute cut of the film. The film is digitally re-mastered, compiled from original source prints (not from sources as the releases are). [ [http://www.dvdcompare.net/comparisons/film.php?fid=1398 Rewind @ www.dvdcompare.net - Army Of Darkness AKA Evil Dead 3 AKA Army of Darkness: Evil Dead 3 (1993) ] ] A new Blu Ray release of Army Of Darkness from Optimum Releasing in the UK is rumoured to be of the Director's Cut; it is to be released on September 19th 2008.