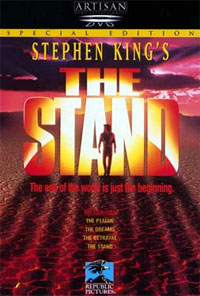 The miniseries closely parallels the events of King's post apocalyptic novel by the same name. A superflu devastates the , leaving only a few survivors. These survivors gravitate towards either the side of good or evil, driven mainly by very vivid dreams in the aftermath of the plague. The climax is a final showdown between good and evil in Las Vegas, .

had originally been cast as Judge Farris, but shortly after filming had commenced his health declined, and he died shortly after that. Ossie Davis was present at the filming because his wife, Ruby Dee, was playing Mother Abigail. Davis took over the role of Judge Farris.

Ed Harris and Kathy Bates both had small, uncredited roles in the early parts of the series. Bates's character, Rae Flowers, was originally a man (Ray Flowers), but when Bates became available the role was altered slightly. Harris plays the Army general in charge of the original bio-weapons project who kills himself after the failure of the disease containment means most of the human population will die.

Rob Lowe had been originally considered for the role of Larry Underwood, but Garris felt that having him in the more unusual role of the deaf-mute Nick Andros would better suit the production. Adam Storke ended up with the role of Underwood, where his musical skills were an asset.

Miguel Ferrer originally was interested in the role of Randall Flagg, but the sights were initially set on actors such as , , and . Stephen King wanted someone that the audience "wasn't terribly familiar with." After Ferrer heard that Jamey Sheridan had been offered the part, but wasn't sure it was something he wanted to do, Ferrer convinced him to take the part.

Set designer created all 225 sets for the miniseries. Faced with prices of $40 per stalk for New York-made fake corn, Coates opted instead to grow 3,250 corn stalks as a cost-cutting measure; when a winter storm hit Utah, the reproduction of a Nebraska house with cornfield became complicated by the fact that the harsh weather did not allow the corn crop to grow taller than 4 feet.

Originally, parts of the miniseries were to be filmed on location in . After the passage of Colorado Amendment 2, which nullified local gay rights laws, the production was moved to Utah in protest. [Dusty Saundes. "Amendment 2 Drives Film's Makers Away" "Rocky Mountain News", May 8, 1994]

Deviations from the novel

Some characters who appeared in the Complete and Uncut version of the novel were omitted from the TV miniseries. On the DVD commentary, it is stated that the screenplay is based on the original, shortened version of the novel. Early in the show, Fran Goldsmith's mother, Carla, is omitted. Her boyfriend, Jesse (father of her child), is also not seen in the film, but is mentioned in passing by Fran, Harold Lauder and Peter Goldsmith. The only other notable full omission was the character of "The Kid" who had a key role in Trashcan Man's journey towards Las Vegas.

Several minor characters in the novel were combined into one character, maintaining the plot elements but simplifying the story somewhat. Col. Dick Deitz and Dr. Elder are merged into the character of Dr. Deitz at the Stovington, Vermont Disease Center. Rita Blakemoor, Larry's original companion during his exit from New York was combined with the character of Nadine Cross. Elements of the character of Perion McCarthy are expressed by Dayna Jurgens in the miniseries.

Early in the miniseries, key elements of the story are not expanded in the same way as the novel. Fran Goldsmith's mother's horrified reaction to Fran's out-of-wedlock pregnancy are not covered, as her mother's character was not included in the series. Also, Harold Lauder begins the novel as obese, but burns the weight off on the journey, while the actor playing Harold () is naturally slim from the beginning.

In the novel, it is Nadine Cross who initially takes care of "Joe" (Leo Rockway). In the mini-series, Nadine and "Joe" have no interaction. Nadine has left Larry Underwood by the time Larry teams up with "Joe" and Lucy Swann. Nadine also takes on the role of Rita Blakemoor; Larry meets her in New York, where they journey out of the city together. Nadine and Larry part ways not long after leaving the city. Unlike Rita's character, who over-dosed in the novel, Nadine simply leaves in the middle of the night because of the conflict between her desire to be with Larry, and her destiny to be with Flagg. Nadine and Larry do not meet again until her arrival in Boulder.

Also Frannie's baby is a boy in the uncut version and is named Peter after her father, yet in the miniseries she has a girl which she names Abigail after Mother Abigail.

Several of the more graphic scenes in the novel were eliminated because of their violence and sexual nature in the TV adaptation. The entire plot line concerning the "female zoo" that Stu Redman's party encounters is omitted, with the relevant characters (Dayna Jurgens and Sue Stern) being folded into the storyline through other means. Director Mick Garris also felt that the crime spree and eventual capture of Lloyd Henreid and Poke Freeman was most compromised by the requirements of television.

There are other minor differences between the two versions; most of the alterations made for the miniseries were made to move along the progression of the storyline. The characters from Arnette are moved directly to Vermont, instead of going to Atlanta for initial treatment, for example. Nick's time in Shoyo is similarly compressed, with Ray Booth representing most of the action which was originally split between several of the thugs who beat him up.

* Nominated – Outstanding Performance by a Male Actor in a Television Movie or Miniseries: