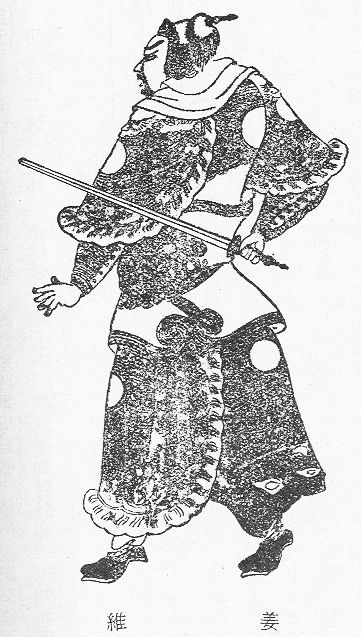 Jiang Wei (202 - 264) was a military general and later regent of during the era of . He was originally a middle-level military officer, but because his mother was captured by Shu Han strategist , Jiang Wei joined him on Zhuge's first Northern Expedition against Cao Wei in 228. Zhuge Liang immediately made him an army commander due to his military capability and resourcefulness. He eventually rose through the ranks during the regencies of Zhuge Liang and of Zhuge Liang's successors and to eventually become Fei Yi's chief assistant. After Fei Yi's death in 253, he succeeded to Fei Yi's position, but did not have the power that Fei Yi had, as he apparently became in charge largely only of military matters -- and therefore was only arguably a regent. Reviving Zhuge Liang's campaigns against Cao Wei (which Jiang Wan and Fei Yi had largely abandoned), Jiang Wei made a number of incursions against Wei -- one in coordination with 's regent (Zhuge Liang's nephew) -- but each had to be abandoned due to the inadequate food supplies or due to battlefield losses, and these campaigns greatly drained Shu Han's resources. In 263, Wei, led by and , conquered Shu Han. Jiang Wei tried to restore the kingdom by persuading Zhong Hui to declare a rebellion against the de facto Cao Wei ruler , Zhong Hui agreed but after he did so, Zhong's own soldiers rebelled against him and Jiang Wei and Zhong Hui were killed in battle.

Jiang Wei was born during the late and was from Commandery . His father (姜冏) was a military officer who was killed in battle during a rebellion, early in Jiang Wei's life. Because of what happened to his father, Jiang Wei became a military general himself for , Han's successor state.

For reasons unknown, when 's regent Zhuge Liang had his first northern expedition in 228, Jiang Wei's commanding officer suspected him of secretly wishing to join Zhuge Liang, and once, when Jiang Wei was outside the city walls with his troops, they closed the city gates and would not allow Jiang Wei to re-enter. Jiang Wei was forced to indeed defect to Zhuge's army, leaving his mother in Cao Wei. Zhuge was impressed by Jiang Wei's military capabilities and quickly made him one of his leading officers, at the age of 27.

After Zhuge Liang's death in 234, succeeded him as regent. He continued to value Jiang Wei's capabilities greatly, and he commissioned Jiang Wei with the title of the governor of Liang Province (涼州, modern ), which Shu Han did not control, but effectively giving Jiang Wei the authority over the northwestern border. After Jiang Wan's death in 245, succeeded him and made Jiang Wei his chief assistant.

Jiang Wei had constantly wanted to revive Zhuge Liang's strategy of actively waging war against Cao Wei, and Fei Yi agreed -- but only partly. He gave Jiang Wei a small detachment of troops to allow Jiang to harass Cao Wei's border defense forces, and Jiang Wei appeared to be fairly effective at this task. He also was successful in persuading a number of non-Han tribes into joining Shu.

After Fei Yi's assassination in 253, Jiang Wei took over Fei's position, making him regent -- but his influence on domestic matters appeared to be limited, as those matters appeared to be dominated by Liu Shan's trusted eunuch . Jiang Wei, however, was the supreme authority in military matters. Jiang Wei attempted to strengthen Shu, however, its government's efficiency and cleanliness were deteriorating from within, greatly hindering Jiang's efforts and magnifying the effect of Jiang's losses on the battlefield.

Jiang Wei immediately revived Zhuge Liang's northern strategy, and later in 253 he set up a coordinated effort with Eastern Wu's regent Zhuge Ke to attack Cao Wei on two fronts -- Shu Han on the west and Eastern Wu on the east. Jiang Wei attacked the key border city of Didao (狄道, in modern , ) as Zhuge Ke launched a massive attack on . Cao Wei's regent correctly judged the Wu force to be the more serious threat and personally led the main Cao Wei force to the eastern front while sending a smaller detachment to relieve Didao. As the first sign of what would eventually recur, Jiang, while sieging Didao, ran out of food supplies and had to withdraw. Eventually, Sima's forces dealt a crippling defeat to Zhuge Ke, leading to Zhuge Ke's downfall later that year.

In 254, Jiang, after (李簡), the county magistrate of Didao secretly declared that he would defect, again advanced on Didao and took the city, but after suffering a loss at the hands of (徐質), Jiang Wei was forced to withdraw.

In the summer of 255, despite the opposition from Zhang Yi (under the rationale that Shu Han could not sustain continuous campaigns against Cao Wei), Jiang again attacked Didao, and was highly successful in his initial battles against the Cao Wei Yong Province (雍州, modern ) governor (王經), nearly annihilating Wang's troops. Zhang Yi again tried to persuade Jiang Wei to stop his campaign at this point, but Jiang refused. Instead, he sieged Didao again and eventually was forced to lift the siege when additional Cao Wei forces arrived under the command of . Jiang Wei and Chen Tai's forces remained in a stalemate throughout the entire winter. In the summer of 256, as Jiang Wei shifted his strategy to advance instead on Shanggui (上邽, in modern , ), his move was anticipated by the Wei general Deng Ai, who intercepted him and dealt him a major loss -- a loss that would cause the people of Shu to begin to resent Jiang.

In 257, when the Cao Wei was dealing with the rebellion of (who had anticipated an usurpation by Sima Shi's brother and successor and wanted to resist it), Jiang Wei again attacked, this time advancing all the way to Mangshui (芒水, in modern , ), but could not induce Cao Wei's forces, commanded by Deng Ai and , to engage him in battle. After Zhuge was defeated in 258, Jiang withdrew.

In 262, Jiang Wei, despite 's opposition, again attacked Wei, targeting Taoyang (洮陽, in modern (Hezuo), ), but was defeated by Deng Ai. He withdrew to Tazhong (沓中, also in modern Gannan), and, apprehensive that Huang Hao might take this opportunity to damage him politically, did not dare to return to the Shu Han capital , but remained at Tazhong, perhaps to carry out one strategy that Zhuge considered late in his campaigns -- have soldiers grow wheat to use as next year's food supply. Why Jiang was particularly apprehensive of Huang at this point was that he had unsuccessfully tried to persuade Liu Shan to execute Huang Hao earlier that year, and Huang was trying to find an opportunity to replace Jiang Wei with his friend Yan Yu (閻宇).

In 258, Jiang Wei had suggested the following strategic plan be drawn up in case of a major Wei attack -- that the border cities do not try to resist, but instead have the main forces to withdraw to the mountain passes to wait for Wei forces to be worn out, and then close up their path of withdrawal. Liu Shan approved the strategy and made it the official plan to follow in case Cao Wei attacked.

Late in 262, aggravated by Jiang's constant attacks, Sima Zhao considered hiring assassins to kill Jiang Wei. At his strategists' suggestion, he decided instead to try to wipe out Shu Han once and for all, and commissioned Deng Ai and Zhong Hui to lead the Cao Wei forces against Shu Han. Jiang Wei quickly realized that Wei was about to attack and petitioned Liu Shan to send forces to block off the key passes, but Huang Hao, believing in fortunetellers, disagreed and persuaded Liu Shan to take no actions on Jiang Wei's petition.

In 263, while Jiang was still at Tazhong, the Cao Wei attack was launched. Liu Shan ordered that Jiang Wei's plan from 258 be carried out -- but much to Liu Shan's surprise, the Wei forces took no heed of Shu Han border cities at all and headed directly for the key passes. Jiang Wei quickly withdrew his forces to try to defend against the attack, and after some initial failures, was finally able to block off Zhong Hui's forces at Jiange (劍閣, in modern , ). Zhong Hui considered retreating, but Deng Ai led a smaller detachment through a treacherous mountain pass descending on Jiangyou (江油, in modern , ), defeating Zhuge Liang's son and heading directly for the Shu Han capital . Surprised and believing that Chengdu was defenseless, Liu Shan surrendered and ordered Jiang Wei to surrender to Zhong Hui, even though Chengdu was still manned by hundreds of thousands of soldiers. Zhong Hui treated Jiang Wei with respect and quickly made him a key advisor.

Jiang Wei quickly saw that Zhong Hui had other ideas -- Zhong considered his abilities superior to all Cao Wei generals, even Sima Zhao, and wanted to overthrow Sima. Jiang Wei encouraged Zhong to rebel against Sima Zhao, and Zhong agreed. Zhong Hui first falsely reported to Sima Zhao that Deng Ai was planning a rebellion, and forged letters to and from Deng to increase the tension between Sima Zhao and Deng Ai. In early 264, Sima ordered that Zhong arrest Deng and seize his troops -- but at the same time led a force personally, heading toward Chengdu from the Cao Wei capital . Zhong Hui, after seizing Deng Ai's troops, realized that Sima Zhao had seen through his intentions, and declared a rebellion.

Jiang Wei had other plans, however. He tried to persuade Zhong Hui to kill all of the high level Cao Wei officers, with his own plan that after Zhong did so, he would kill Zhong Hui and then all of the Wei soldiers and redeclare Shu Han's independence. He wrote letters to Liu Shan explaining his actions. Zhong Hui tentatively agreed with Jiang Wei's suggestion to kill all of the key officers, but hesitated in carrying the plan out. The plan leaked, however, and Zhong's soldiers turned against him. Jiang Wei led Zhong's personal guards against the rebelling soldiers, but could not withstand the attack and was killed in battle, along with Zhong Hui. Jiang Wei's wife and children were also killed in the confusion.

Jiang Wei was one of the most controversial figures in Chinese history. In 's "Modern Chinese Edition" of 's "", for example, Bo cited seven different and discordant views of Jiang's career -- ranging from ringing endorsements of his honesty and loyalty to Shu Han ( (裴松之), commentator to the "Records of Three Kingdoms") to criticism of his constant draining campaigns (, author of the "Sanguo Zhi") to outright condemnation ( (孫盛), author of the "Spring and Autumn Annals of Jin"), each of which could be considered a potentially valid view of his complicated character. (Bo himself declined comment, but later in an open letter to a reader suggested that all of the views were, indeed, correct -- that Jiang's fatal errors were to drain the energy of his people, but that he was indeed an honest and loyal man, willing to lay down his life in a futile attempt to reestablish Shu Han.)

*Jiang Wei is a playable character the video game series "". He is portrayed as an inherently kind and noble individual with a fierce desire to learn and a deep respect for brilliant men, friend and foe alike.

*He also appeared in "" as a resistance fighter.