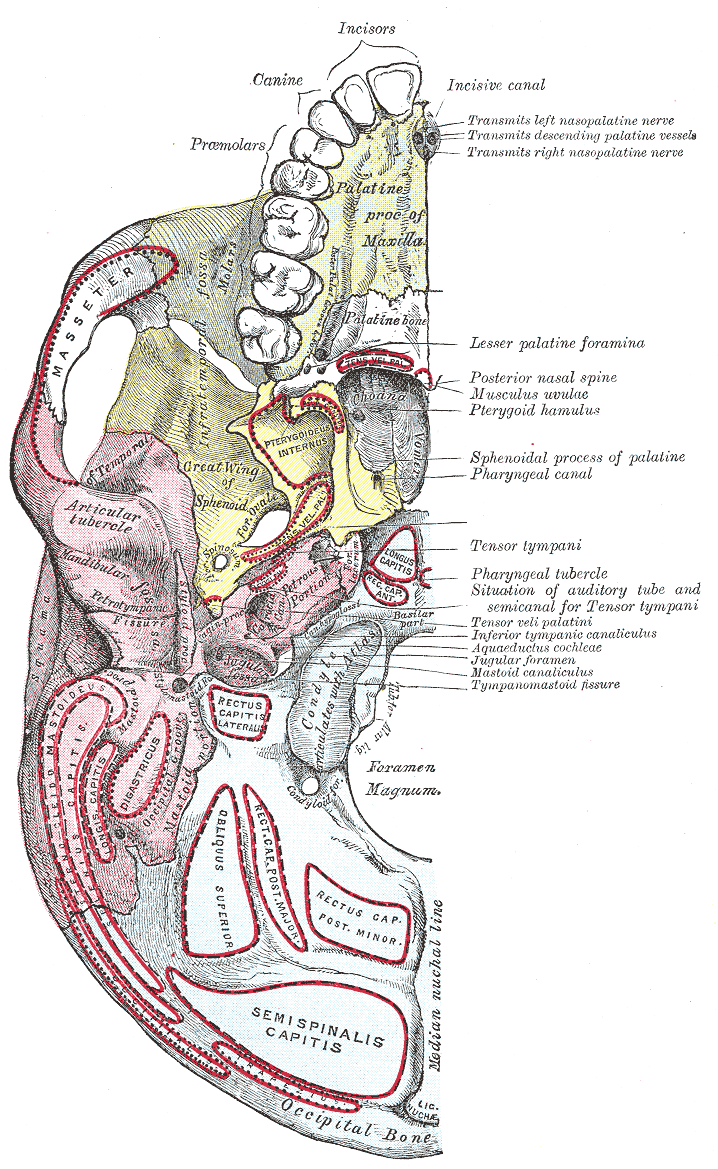 Caption = Base of skull. Inferior surface. (Choana is labeled in gray recess approximately 1/3 of the way from the top, at center.) 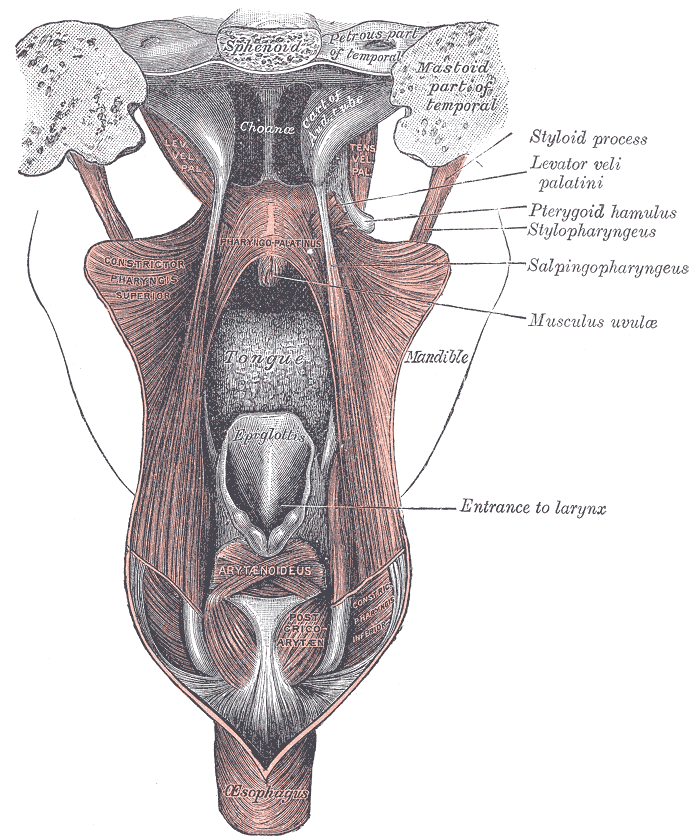 The choanae are separated by the .

It is the opening between the and the .

It is therefore not a structure but a space bounded as follows:
* and by the of ,
* superiorly and posteriorly by the
* laterally by the s.

The term is a latinization from the Greek "choanē" meaning .

The only animals with choana are the tetrapoda, and they could as well be called Choanata (they are also the only ones with a , which has an embryonic origin from the olfactory structure).

These internal nasal passages evolved while the vertebrates still lived in water. At this point they already needed to gulp air to get enough oxygen, and rather than open their jaws each time to do this, some groups acquired small openings to breathe through as a better design.

don't have choana, instead they have a pair of external nostrils: two tubes whose frontal openings lie close to the upper jaw, and the posterior openings further behind near the eyes.

A 400-million-year-old fossil lobe-finned fish called has something between a choana and the external nostrils seen on other fish, which makes it look like it has a cleft palate or cleft lip. The reason seems to be that the posterior opening of the external nostrils has migrated into the mouth for some reason.

Similar migration is still seen in the tetrapod embryo, and can cause a baby to be born with a cleft palate. Why it should migrate is a mystery, since the nostrils would be useless as a breathing device before their final position inside the mouth. They could also already breath air through their spiracles.

Tetrapods are also equipped with a lacrimal duct, or tear duct. How it evolved is not known, but it has an internal connection with the choana. It's possible that the choana started as a natural crack between maxilla and premaxilla because of an incomplete fusion in air breathing animals. If this gap got wider and deeper with time, the frontal part of it would have to fuse together to avoid weakening the upper jaw, creating a small opening on the upper lip. Some more migrating, and this gap would meet the anterior pair of the external nasal openings. The posterior pair of the openings was then free to form the lacrimal duct if a migration caused them to come in contact with the eyes.

Choanae analogues in other animals and fossils

This wouldn't been the first time the jaws evolved some sort of opening. For instance, snakes have evolved a cleft in the lower jaw, allowing them to stick out their tongue without having to open the jaw. For an animal living in water, the formation of a paired cleft on the upper jaw would be quite logical. Terrestrial vertebrates would in any case need a way to breath without needing to open their jaws each time.

Some fossil species are said to have both conventional external nostrils and a choana, but only more fossils will give a real answer to how the choanas evolved.

In addition to tetrapods, the has internal nostrils too. These seem to have a different origin than those of the tetrapods, and lungfish have no tear duct either.

es have a single internal nostril that opens inside the mouth cavity, while e have open canals that leads water from their external nostrils into their mouth and through their gills.