Mount Si (pronounced sigh) is a mountain in the U.S. state of Washington. It lies on the western margin of the Cascade Range just above the coastal plains around Puget Sound, and towers over the nearby town of North Bend. The mountain was named after local homesteader Josiah "Uncle Si" Merritt. It was made famous in the show Twin Peaks, which was filmed in North Bend.

Only about a 45-minute drive from Seattle, the mountain is a favorite outdoor destination for residents of Puget Sound. Between 80,000 and 100,000 hikers visit the mountain annually.[1] 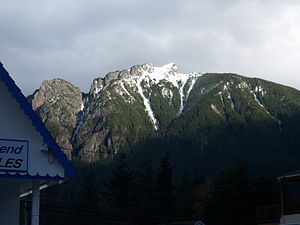 A winter view of Mt. Si from the town of North Bend

Mount Si is a remnant of an oceanic plate volcano and the rocks are highly metamorphosed.[4]

Mount Si figures prominently in a Prometheus story from the Snoqualmie tribe. According to the story it is the dead body of Snoqualm, the moon. Snoqualm had ordered that a rope of cedar bark be stretched between the earth and the sky. But Fox and Blue Jay went up the rope and stole the sun from Snoqualm. Snoqualm chased them down the cedar rope, but it broke and he fell to his death. Fox then let the sun free in the sky and gave fire to the people. A face like Snoqualm's is visible on the rocks near the summit.[5]