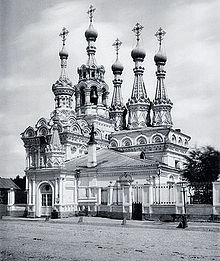 The snow-white church with its multiple tents and azure-and-gold domes resembles a daintily carved piece of ivory.

The Church of the Nativity of the Theotokos at Putinki is one of the most picturesque churches in Moscow and the last major tent-like church in the history of Russian architecture. The French architect Eugène Viollet-le-Duc was so impressed with its design that he dubbed it "Russian Gothic".

The Nativity church at Putinki consists of six exquisite tented roofs arranged in a highly unusual composition. Three candle-like tents, placed in a row, crown the church, while its refectory is surmounted by several rows of corbel arches and the fourth tent. The fifth tent is a belltower placed between the church and refectory. The porch also terminates in a pyramidal roof.

The church was commissioned by Tsar Alexis Mikhailovich in 1649 in order to grace a highway leading from Moscow to the Trinity Monastery. Construction works were completed within three years. As the story goes, Patriarch Nikon, when passing the church on his way to the Trinity Monastery, was so scandalized by its unorthodox design that he prohibited the construction of tent-like churches altogether.

The Soviet authorities closed the church in 1938 but they also funded repair works in 1957. Following the collapse of the Soviet Union, the church was reopened as the patriarch's metochion.