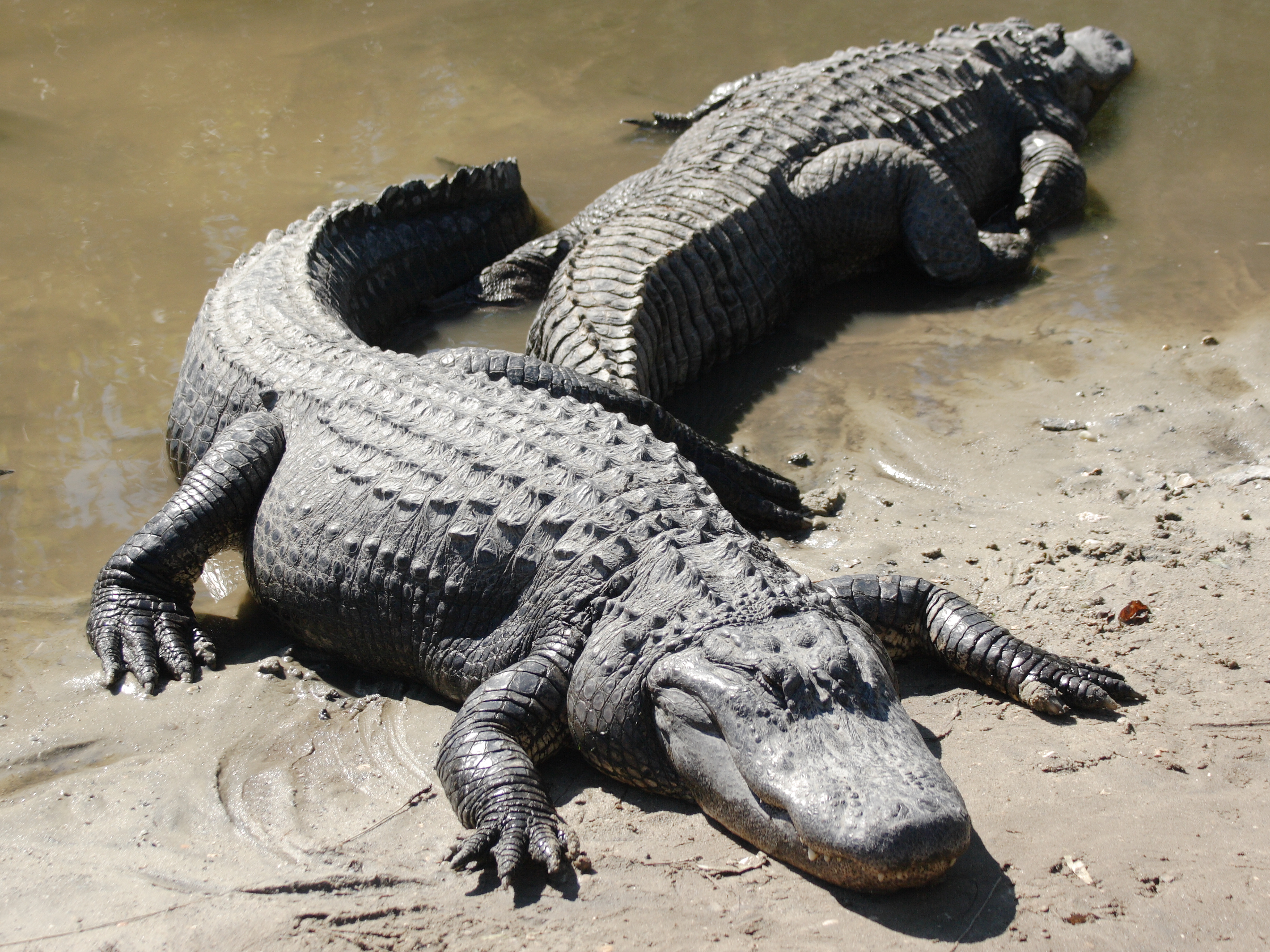 The alligator has been described as a ' from the age of reptiles, having survived on earth for 200 million years'. [ [http://ecos.fws.gov/speciesProfile/SpeciesReport.do?spcode=C000 American alligator, Wildlife Species Information: U.S. Fish and Wildlife Service ] ]

An average American alligator's weight and length is 800 lbs (360 kg) and 13 feet (4 m) long, but can grow to 14.5 feet (4.39 m) long [http://www.colszoo.org/living_collection/AmericanAlligator.aspx] and weigh 1000 lbs (454.5 kg) [http://www.eparks.org/marine_and_coastal/marine_wildlife/alligator.asp] . According to the Everglades National Park website, the largest alligator ever recorded in Florida was 17 feet 5 inches long (5.3 m), although according to the Florida Fish and Wildlife Conservation Commission web site the Florida state record for length is a 14 foot 5/8 inch male from Lake Monroe in Seminole County.Fact|date=February 2008 The Florida record for weight is a 1,043 pound (13 feet 10 1/2 inches long) male from Orange Lake in Alachua County. The largest alligator ever recorded in Alabama measured 12 feet 08 inches (3.7 m). The largest alligator ever recorded measured 19 feet 2 inches (5.8 m) and was found on Marsh Island, Louisiana. Few of the giant specimens were weighed, but the larger ones could have exceeded a ton in weight. The Chinese alligator is smaller, rarely exceeding 7 feet (2 m) in length. Speeds have been clocked by alligators of up to 27 mph, making one of the fastest large reptiles on the planet.

An alligator's lifespan is usually estimated in the range of 50 years or more. A specimen named Muja has resided in the Zoo in since 1937, making it at least 71 years old. Another specimen, , in , Latvia died in 2007 being more than 72 years old.

Alligators are native to only two countries: the and . In the Southeastern U.S., alligators are found in most freshwater and brackish areas.Also, Alligators have been known to clock speeds of up to 27 miles-per-hour.Fact|date=October 2008

Large male alligators are , territorial animals. Smaller alligators can often be found in large numbers in close proximity to each other. The largest of the species (both males and females), will defend prime territory; smaller alligators have a higher tolerance of other alligators within a similar size class.Although alligators have heavy bodies and slow s, they are capable of short bursts of speed, especially in very short lunges. Alligators' main prey are smaller animals that they can kill and eat with a single bite. Alligators may kill larger prey by grabbing it and dragging it in the water to drown. Alligators consume food that cannot be eaten in one bite by allowing it to rot or by biting and then spinning or convulsing wildly until bite-size pieces are torn off. This is referred to as the "death roll." A hard-wired response developed over millions of years of evolution, even juvenile alligators execute death rolls when presented with chunks of meat. Critical to the alligator's ability to initiate a death roll, the tail must flex to a significant angle relative to its body. Immobilizing an alligator's tail incapacitates its ability to begin a death roll. [cite journal
last = Fish
first = Frank E.
authorlink =
coauthors = Bostic, Sandra A.; Nicastro, Anthony J.; Beneski, John T.
title = Death roll of the alligator: mechanics of twist feeding in water
journal = The Journal of Experimental Biology
volume = 210
issue =
pages = 2811-2818
publisher = [http://www.biologists.com/ The Company of Biologists]
location =
date = 2007-08-09
url = http://jeb.biologists.org/cgi/content/abstract/210/16/2811
doi = 10.1242/jeb.004267
id =
accessdate = 2008-09-27]

Most of the muscle in an alligator's jaw is intended for biting and gripping prey. The muscles that close the jaws are exceptionally powerful, however the muscles for opening their jaws are relatively weak in comparison. As a result, an adult man can hold an alligator's jaw shut with his bare hands. In general, a strip of is enough to prevent an adult alligator from opening its jaws and is one of the most common methods used when alligators are to be captured and/or transported. [ [http://crocodilian.com/crocfaq/faq-3.html Crocodilian Captive Care FAQ: How to properly handle/transport crocodilians etc.] ] Alligators are generally timid towards humans and tend to walk or swim away if one approaches. Unfortunately, this has led some people to the practice of approaching alligators and their nests in a way that may provoke the animals into attacking. There are federal laws that prohibit feeding of the alligators in several locations where they can be found; however, some people choose to ignore these.Fact|date=July 2008 If fed, the alligators will eventually lose their fear of humans and may, in turn, choose to approach human settlements rather than moving away.

When young they eat , , , , and s. As they grow, they take progressively larger prey items, including larger fish such as , turtles, various mammals, birds, antelope and other . Their stomachs also often contain s. They will even consume if they are sufficiently hungry. Adult alligators can take razorbacks and deer and are well known to kill and eat smaller alligators. In some cases, larger alligators have been known to hunt the and black bears, making it the throughout its distribution. As humans encroach onto their habitat, attacks on humans are few but not unknown. Alligators, unlike the large crocodiles, do not immediately regard a human upon encounter as prey, but may still attack in self-defense if provoked.

Human deaths caused by alligators have increased. While there were only nine fatal attacks in the U.S.A. between 1970 and 2000, eleven people were killed by alligators in the five years between 2001 and 2006 alone. Fact|date=November 2007

Alligators do tend to be wary of humans, but overconfidence has led some people to enter the animals' habitat in ways that provoke attack. Aggressive behavior by alligator males can increase in the spring during mating season.

Alligators generally mature at a length of six feet (1.8 m). The mating season is in early spring. The female builds a nest of vegetation where the decomposition of the vegetation provides the heat needed to incubate the eggs. The sex of the offspring is determined by the temperature in the nest and is fixed within 7 to 21 days of the start of incubation. Incubation temperatures of 30 °C (86 °F) or lower produce a clutch of females; those of 34 °C (93 °F) or higher produce entirely males. Nests constructed on levees are hotter than those constructed on wet marsh and, thus, the former tend to produce males and the latter, females. The natural sex ratio at hatching is five females to one male. Females hatched from eggs incubated at 30 °C weigh significantly more than males hatched from eggs incubated at 34 °C. [3] The mother will defend the nest from predators and will assist the hatchlings to water. She will provide protection to the young for about a year if they remain in the area. The largest threat to the young are adult alligators. Predation by adults on young can account for a mortality rate of up to fifty percent in the first year. In the past, immediately following the outlawing of alligator hunting, populations rebounded quickly due to the suppressed number of adults preying upon the new recruits, increasing survival among the young alligators.

Alligator farming is a big and growing industry in Georgia, Florida, Texas and Louisiana. These states produce a combined annual total of some 45,000 alligator hides. Alligator hides bring good prices and hides in the 6-7 foot (1.8-2 m) range have sold for $300 each, though the price can fluctuate considerably from year to year. The market for alligator meat is growing and approximately 300,000 pounds (140 000 kg) of meat is produced annually. According to the Florida Department of Agriculture, raw alligator meat contains roughly 200 calories per 3oz (85 g) serving size, of which 27 calories come from fat. [ [http://www.annecollins.com/calories/calories-alligator.htm Calories in alligator meat] ]

Alligator meat is sometimes used in s, s, and s.