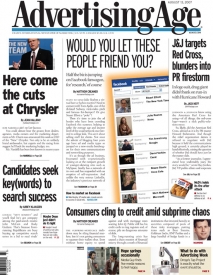 Advertising Age (or AdAge) is a , delivering news, analysis and data on marketing and media. The was started as a newspaper in Chicago in 1930. Today, its content appears in a print weekly distributed around the world and on many electronic platforms, including: AdAge.com, daily e-mail newsletters called Ad Age Daily, Ad Age's Mediaworks and Ad Age Digital; weekly newsletters such as Madison & Vine (about branded entertainment) and Ad Age China; podcasts called Why It Matters and various videos. AdAge.com also features a bookstore and a number of blogs, some created by the publication's editorial team, others, such as Small Agency Diary are created by members of the Ad Age community. Among its notable columnists is Simon Dumenco as the "Media Guy".

AdAge's parent company also a monthly magazine called "Creativity", about the creative process, which has its own website, Adcritic.com, featuring what its editors believe to be the best video, print and interactive ads.