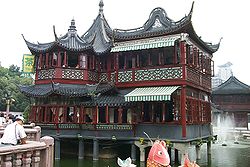 A tea house in Shanghai, China. 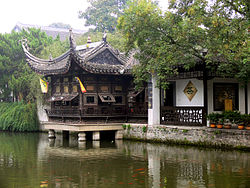 Chinese tea culture refers to the methods of preparation of tea, the equipment used to make tea and the occasions in which tea is consumed in China. The terms chayi "Art of Tea 茶藝" and "Tea Ceremony" have been used, but the term "Tea Culture茶文化" includes more than just the ceremony. Also "culture" is easier to translate into English from the Chinese term "art 藝".

Tea culture in China differs from that of Europe, Britain or Japan in such things as preparation methods, tasting methods and the occasions for which it is consumed. Even now, in both casual and formal Chinese occasions, tea is consumed regularly. In addition to being a drink, Chinese tea is used in traditional Chinese medicine and in Chinese cuisine.

For contemporary Chinese, the word "茶" (pinyin: chá) has come to commonly denote the drink that is derived from Camellia sinensis, the tea plant (茶樹/茶树, pinyin: cháshù). Prior to the 8th century BC, the tea was known collectively under the term "荼" (pinyin: tú) along with a great number of other bitter plants. The great similarity of the two characters are notable with the exception of an additional horizontal stroke in 荼. The character is made up of the "艸" (pinyin: cǎo) radical in its reduced form of "艹" and the word "余" which gives the phonetic cue. The plant was later more distinctly identified and was called "檟苦荼" (pinyin: jiǎkǔtú, literally "'evergreen shrub' of bitter 'bitter plant'"), or in simplified forms "苦荼" (pinyin: kǔtú) or "荈" (pinyin: chuǎn).

The word "茗" (pinyin: míng), which was possibly derived from the Burmese word, was later used to indicate tea where its popularity spread and became more common in Ancient China. This word is still used in modern tea communities in Taiwan and the People's Republic of China to denote tea. By the end of the 8th century BC, the character "荼" was finally simplified to "茶". Lù Yǔ (陸羽/陆羽, 733-804) of the Tang Dynasty, wrote in his crowning work, The Tea Classic or Chájīng (茶經/茶经), on the origins of the character for tea as well as the numerous words used to denote tea. In the first chapter of Chájīng, "The origins" (卷上, 一之源) he wrote: 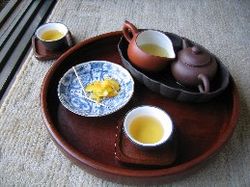 A pot of Chinese tea 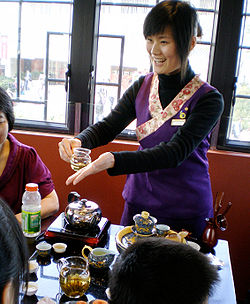 A hostess serves tea at a traditional Chinese tea house

There are several special circumstances in which tea is prepared and consumed.

In Chinese society, the younger generation always shows its respect to the older generation by offering a cup of tea. Inviting and paying for their elders to go to restaurants for tea is a traditional activity on holidays. In the past, people of lower rank served tea to higher ranking people. Today, as Chinese society becomes more liberal, sometimes at home parents may pour a cup of tea for their children, or a boss may even pour tea for subordinates at restaurants. The lower ranking person should not expect the higher rank person to serve him or her tea in formal occasions, however.

When sons and daughters leave home to work and get married, they may seldom visit their parents. As a result, parents may seldom meet their grandchildren. Going to restaurants and drinking tea, therefore, becomes an important activity for family gatherings. Every Sunday, Chinese restaurants are crowded, especially when people celebrate festivals. This phenomenon reflects Chinese family values.

In Chinese culture, people make serious apologies to others by pouring tea for them. For example, children serving tea to their parents is a sign of regret and submission.

In the traditional Chinese marriage ceremony, both the bride and groom kneel in front of their parents and serve them tea. That is a way to express their gratitude. In front of their parents, it is a practice for the married couple to say, "Thank you for bringing us up. Now we are getting married. We owe it all to you." The parents will usually drink a small portion of the tea and then give them a red envelope, which symbolizes good luck. Another variant is for the bride to serve tea to the groom's parents, symbolizing that she is to become a part of the latter's family.

The tea ceremony during weddings also serves as a means for both parties in the wedding to meet with members of the other family. As Chinese families can be rather extended, one or two hundred people, it is entirely possible during a courtship to not have been introduced to someone. This was particularly true in older generations where the patriarch may have had more than one wife and not all family members were always on good terms. As such, during the tea ceremony, the couple would serve tea to all family members and call them by their official title. Drinking the tea symbolized acceptance into the family. Refusal to drink would symbolize opposition to the wedding and is quite unheard of since it would result in a loss of "face". Older relations so introduced would give a red envelope to the matrimonial couple while the couple would be expected to give a red envelope to younger, unmarried relations. 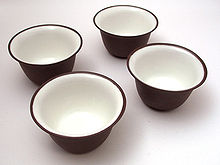 Light finger tapping is a custom for thanking the tea master or tea server for tea. After a person's cup is filled, that person may knock their bent index and middle fingers (or some similar variety of finger tapping) on the table to express gratitude to the person who served the tea. Although this custom is common in southern Chinese culture such as the Cantonese, in other parts of China it is only acceptable if for some reason you cannot actually say thank you at that moment, for example if you are in the middle of talking with someone else at the table.

This custom is said to have originated in the Qing Dynasty when Emperor Qian Long would travel in disguise through the empire. Servants were told not to reveal their master's identity. One day in a restaurant, the emperor, after pouring himself a cup of tea, filled a servant's cup as well. To that servant it was a huge honour to have the emperor pour him a cup of tea. Out of reflex he wanted to kneel and express his thanks. He could not kneel and kowtow to the emperor since that would reveal the emperor's identity so he bent his fingers on the table to express his gratitude and respect to the emperor.

The bent fingers for knocking are technically supposed to be three to signify a bowing servant. One is the head and the other two are the arms.

It should be noted that in formal tea ceremonies nodding of the head and/or saying "thank you" is more appropriate.

There are many different ways of brewing Chinese tea depending on variables like the formality of the occasion, the means of the people preparing it and the kind of tea being brewed. For example, green teas are more delicate than oolong teas or black teas and should be brewed with cooler water as a result. The most informal method of brewing tea is the simple adding of leaves to a pot, and hot water. This method is commonly found in households and restaurants, as at dim sum (點心) or yum cha (飲茶) in Cantonese restaurants. Two other primary methods of brewing tea are the Chaou method and the Gongfucha method. Chaou brewing tends towards a more formal occasion and is generally used for more delicate teas, medicinal teas and tea tastings. Gongfucha brewing is a far more formal method of tea brewing (mainly for oolong or double fermented teas like Pu'erh) although even this method can be made more or less formal depending on the occasion. The first Ming Dynasty Emperor Hongwu contributed to the development of loose tea brewing by banning the production of compressed tea. 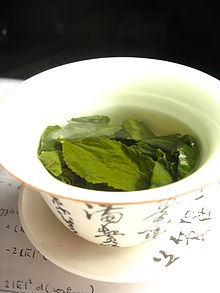 Gàiwǎn also known as a cover bowl(蓋碗/盖碗; lit., "lidded bowl"), also known as 蓋杯 (Pinyin: gàibēi; lit., "lidded cup") or 焗盅 (Pinyin: júzhōng; lit., "heat suffocation vessel") depending on the region of the China. "Gaiwan" is a relatively new word. This method of 'brewing' tea was originally developed by the Chaoshan people and its original name is Chá-ōu, 茶甌 (simplified 茶瓯). There are two words for brewing. One is chōng (沖) and the other is pào (泡). For chaou brewing, the word zhōng is used rather than pào.

The chaou is a three piece teaware consisting of a lid, cup/bowl, and a saucer. Chaous are generally made of porcelain or are glazed on the inside in order to prevent a buildup of tannins. The chaou may be used on its own or with tasting cups on the side. Chaou brewing is usually employed in tea tasting situations, such as when buying tea, where neutrality in taste and ease of access to brewing leaves for viewing and sniffing is important. This method of serving is often used in informal situations, though it can also be used on more formal occasions. Chaou brewing can be used for all forms of teas though lightly oxidized teas benefit most from this brewing method. 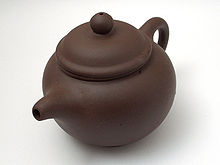 The Gōngfu Chá Dào (工/功夫茶道) also known as "工Gongfucha" or the "功Kung Fu Tea Ceremony" is a relatively famous tradition of Minnan (閩南) and Chaozhou (潮州) or Chaoshan (潮汕). It makes use of small Yixing teawares teapot of about 100 – 150 ml (4 or 5 fl.oz.) to enhance the aesthetics, and more importantly "round out" the taste of the tea being brewed. Yixing teapot brewing sides towards the formal, and is used for private enjoyment of the tea as well as for welcoming guests. The following steps are one popular way to brew tea in a form considered to be a kind of art. Depending on the region of China the steps may differ, as will the tools used in the making of tea (e.g. Taiwanese-style Gongfu cha which makes use of several additional instruments including tweezers and a tea strainer). This procedure is mostly applicable to Oolong teas only although some use it to make Pu'erh and other double-fermented teas.

Influence of tea on Chinese culture

Tea has had a major influence on the development of Chinese culture. Chinese traditional culture is closely connected with Chinese tea. In literature, arts, and philosophy, tea is often associated. Tea is connected closely with Taoism, Buddhism and Confucianism. Roughly, since Tang Dynasty, drinking tea is a must for self-cultivation. Chinese Chan (Japanese:Zen or philosophy is also linked with drinking tea.

Traditionally tea drinkers were always considered to be high level or elite and highly respected by society, because drinking tea is the show of personal morality, education, principle and status. Increased enthusiasm for tea drinking led to the greater production of tea ware, and also significantly popularised Chinese porcelain culture.

Chinese scholars have used the teahouse for places of sharing ideas. Teahouse is the by-product of Chinese tea culture but it also the historical evidence of Chinese tea history. Currently, people can also feel such a kind of humanistic atmosphere in Beijing like Lao She Teahouse and East China like Hangzhou, Suzhou, Yangzhou, Nanjing, Wuxi, Shaoxing and Shanghai and so on. It is still dynamic and vigorous.

In modern China, virtually every dwelling—down to the simplest mud huts—has a set of tea implements for brewing a hot cup of tea. These implements are symbols of welcome for visitors or neighbors. Traditionally, a visitor to a Chinese home will be expected to sit down and drink tea while talking; the Chinese consider having such visits while standing to be uncouth. There are several types of tea. There is green tea, oolong tea, red tea, black tea, white tea, yellow tea, puerh tea and flower tea. Tea leaves are traditionally produced by constantly turning fresh leaves in a deep bowl. This process allows it to dry with its full flavor ready to be used.

Below are some Chinese tea ceremonies: