She Wore a Yellow Ribbon

She Wore a Yellow Ribbon 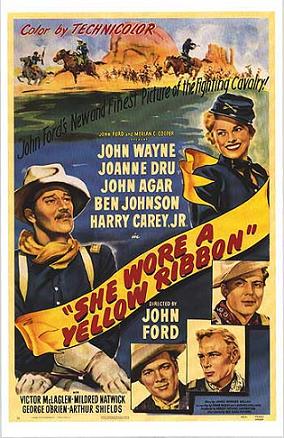 "She Wore a Yellow Ribbon" is a 1949 western film directed by and starring . The film was the second of Ford's trilogy of films focusing on the , the other two films being "Fort Apache" (1948) and "Rio Grande" (1950). With a budget of $1.6 million, the film was one of the most expensive westerns of the time, but became a major hit for RKO and remains a popular classic today.

Known for its breathtaking views of located on the southern border of ; the cinematographer, Winton Hoch, won the 1950 Academy Award for Best Color Cinematography. Ford and Hoch based much of the film's imagery on the paintings and sculptures of .

Ford demonstrated a number of standard Cavalry procedures in horse management in this and other movies. Strict rotation between walk, trot, and leading the horses made them last as long as possible. They were still no match for the lightly burdened Indian horses for endurance, but US Cavalry horses were fed grain (when available), and this helped even the odds a bit.

The film is named after a song common in the U.S. military, "She Wore a Yellow Ribbon", which is still used today to keep marching cadence. It is a variant of the song "All Around My Hat".

On the verge of his retirement, the aging Cavalry Capt. Nathan Cutting Brittles () deals with a series of attacks by the following the defeat of . Unwilling to see more lives needlessly taken, Brittles takes it upon himself to try to make peace with Chief Pony That Walks ().

The movie's narrator references rider's concerns over George Custer's defeat. Custer was killed in 1876, whereas the pony express made its last ride fifteen years earlier in 1861 after only a year of service.