Cleveland State University (also known as Cleveland State or CSU) is a public university located in downtown Cleveland, Ohio. It was established in 1964 when the state of Ohio assumed control of Fenn College, and it absorbed the Cleveland-Marshall College of Law in 1969.[1] Today it is part of the University System of Ohio and has approximately 16,000 students and over 100,000 alumni.[3] Its mission is to "encourage excellence, diversity, and engaged learning by providing a contemporary and accessible education in the arts, sciences, humanities and professions, and by conducting research, scholarship, and creative activity across these branches of knowledge."[4]

Industrialist James J. Nance served as the first Board of Trustees Chairperson. The name would later be changed to Cleveland State University.

Ronald M. Berkman is the current president. Geoffrey Mearns, former dean of the Cleveland-Marshall College of Law, was named provost, as permanent replacement for Mary Jane Saunders, who resigned in 2010.[5]

On April 26, 2009, Dr. Ronald M. Berkman was named as the sixth President of Cleveland State University.[7]

The Cleveland State University Board of Trustees consists of nine trustees, a Secretary to the Board, two faculty representatives, and two student representatives.[8] The board members, along with the University President, are charged with fulfilling the goals set forth in the University Mission Statement as well as acting as the governing body in all policy matters of the University requiring attention. In January, 2006 the Board of Trustees amended their bylaws so that they could restructure board committees as well as include Community members on the Board. Community members serve as non-voting advisers and are appointed by the Board Chairman for a term approved by the Board.

Board of Trustees Member Listing[9]

The University is organized around eight academic colleges:[11] 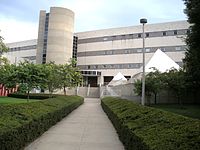 School of Music and Communication

Notable programs include the Maxine Goodman Levin College of Urban Affairs, whose city management and urban policy program is ranked 2nd in the country by U.S. News and World Report, as well as the recently-formed School of Communication, ranked 8th in research productivity and as the top terminal MA-granting program in the United States overall.[12] The Monte Ahuja College of Business is also highly regarded and is ranked in the top ten nationwide in performance of its Certified Public Accountant graduate students. Additionally, CSU is the first university in Ohio to offer a master's degree in software engineering. 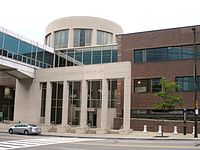 One of the most famous alumni of the Cleveland–Marshall College of Law was Tim Russert, host of television program Meet the Press, who graduated in 1976. The college has also educated numerous highly esteemed judges and founders of prestigious private law firms. Due to its long tradition of providing evening education, the college has a large number of business and community leaders who are non-practicing attorneys as well.

Cleveland State maintains a variety of research links with the Cleveland community. The following are the University's featured research collaborations:[13] 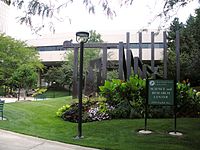 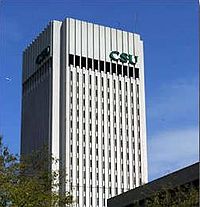 CSU's main campus in downtown Cleveland is bounded on the east and west by Interstate 90 and East 17th Street, respectively; and by Payne Avenue to the north and Carnegie Avenue on the south. It also has satellite campuses in Westlake, Ohio and Solon, Ohio, both in the Greater Cleveland metropolitan area in Cuyahoga County. As of fall 2010, the student body totaled 17,204.

CSU recently unveiled a long-term plan to make the campus more amenable to residence and increase the number of students living on campus by building thousands of housing units, anchored by a new dormitory, Fenn Tower, a reuse of the school's most historic building. The university is working with private developers and the City of Cleveland to develop housing, retail, and "collegetown" amenities around Fenn Tower, particularly along the main thoroughfare of Euclid Avenue, which was upgraded in 2010 as part of the Euclid Corridor Project, bringing bus rapid transit to the university and connecting Public Square in downtown Cleveland to University Circle, approximately four miles east.[15]

The University has also recently completed a new state of the art student recreation center, as well as two new buildings for the Colleges of Graduate Studies and Education; there are longer-term plans to create a "Varsity Village" incorporating athletic fields and student housing into a green, residential area.

Fenn Tower formerly housed what was at one time the longest Foucault pendulum in the world; however, the pendulum has been inoperational since 1980 and was removed during the residence hall renovation in 2006. The pendulum currently resides in the Cleveland State University archives.

The Dramatic Arts Program is in the process of transitioning into the Allen Theatre at Playhouse Square Center in collaboration with the Cleveland Play House.[16]

In 2009, Cleveland State University announced their plan to begin work on $65 million construction project, this project will transform the campus from a commuter school into a residential campus.[17] The construction plans include the new Student Center and Julka Hull, completed in 2010, and more residential areas in Euclid Commons, which are still under construction.

The campus' student-run radio station, 89.3 WCSB-FM, has a 630-Watt transmitter on top of Rhodes Tower (formerly called University Tower). Additionally, Cleveland State is served in print by The Cauldron, an independent student newspaper, The Cleveland Stater,[18] a laboratory newspaper in the School of Communication, The Vindicator, and The Gavel which won the 2005 American Bar Association's -Student Division's first prize for the best law school newspaper in the country. There is no student television station at this time, though the university offers a film production and video production major with courses through its Digital Video Communication Center.

When the school was still known as Fenn College, the sports teams' nickname was the Foxes. When the University was renamed Cleveland State, the nickname changed as well, and CSU's sports teams became the "Vikings". That nickname stands to this day. The school colors are forest green and white. For many years the school mascot was the comic strip character Hägar the Horrible along with his wife Helga, and the couple appeared at sporting events as well as on University literature. A new mascot, "Vike" was introduced in 1997 and Hagar was gradually phased out by 1998. Another new mascot named "Magnus" was introduced in August 2007.

Cleveland State fields varsity teams in seventeen sports. Most of the teams compete in the Horizon League. The men's basketball team was noteworthy in 1986 when seeded 14th in the NCAA tournament, it upset heavily favored 3-seed Indiana and St. Joseph's before being beaten by Navy by one point, an unprecedented achievement for such a low seed. The Vikes made yet another NCAA tournament appearance in 2009, upsetting the highly favored 4th seeded Wake Forest before falling to the University of Arizona in the second round.[19]

On October 14, 2008 CSU President Michael Schwartz stated "he wants a blue ribbon panel to give him a recommendation on the football team before July 1, 2009, when he is scheduled to retire. He also said the program will have to be structured to pay for itself."[20]

The Football establishment issue became an official item on the Cleveland State University, Student Government Association election ballot. From Monday April 12 at 12:01 AM until Friday April 14 the student body voted on the issue. By the Friday evening, the results indicated that 68.7% of the student population favored establishment of a football team. Furthermore the student body was asked if they were willing to pay a fee for Division 1 non-scholarship football in addition to any potential, future tuition increases that may be instituted by the University. The student body responded 55.6% of the vote as no.[21]

Currently, the university is studying the possibility of establishing a football team, Division I non-scholarship in the University and further reports will be released in the upcoming years. 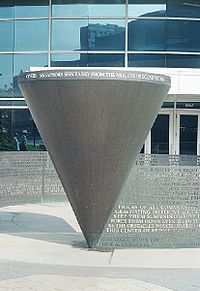