Constitutions arise in a number of different ways. At the non-democratic extreme of the spectrum, we may imagine a sovereign lawgiver laying down the constitution for all later generations. At the democratic extreme, we may imagine a constituent assembly elected by universal suffrage for the sole task of writing a new constitution. And there are all sorts of intermediate arrangements.[2]

During the French Revolution (from July 1789 to September 1791) a National Constituent Assembly (Assemblée nationale constituante) was formed when representatives assembled at the only location available – a tennis court – and swore the Tennis Court Oath on June 20, 1789, promising that they would not adjourn until they had drafted a new constitution for France. Louis XVI recognized the validity of the National Constituent Assembly on June 27, 1789.

On 27 November 2010, Iceland held an election for a constitutional assembly, with 522 people vying for 25 delegate seats.

The Constituent Assembly of Italy was established in 1946 in the wake of Fascist Italy's defeat during World War II. It was elected with universal suffrage, simultaneously with a referendum about the adoption of Republic or the continuation of monarchy. Voters chose Republic, and the new assembly had the task to approve the new republic governments, as well as to write a new constitution. This was approved on 22 December 1947.

It was dissolved on 31 January 1948, to be replaced by the new Parliament of Italy.

The Russian Constituent Assembly was established in Russia in the wake of the October Revolution of 1917 to form a new constitution after the overthrow of the Russian Provisional Government. 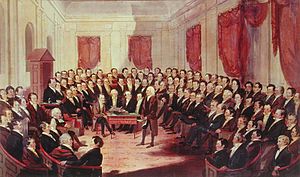 These early state constitutional conventions frequently did not use procedural steps like popular ratification that became commonplace in the mid-19th century. Yet they were considered to be constituent assemblies that exercised their authority as that of the people.[6] As American Sovereigns: The People and America’s Constitutional Tradition Before the Civil War by Christian G. Fritz notes:

“A legitimate constitution depended on whether the sovereign people authorized it, not whether a particular procedure was used or whether revolutionary conventions were free of other responsibilities, such as passing ordinary legislation. It was the people as the sovereign who authorized drafting those first [state] constitutions that gave them their legitimacy, not whether they used procedures that matched what was later understood to be necessary to create fundamental law.”[7]

Countries without an entrenched constitution

A few countries do not have an entrenched constitution which cannot be amended by normal legislative procedures; the United Kingdom, New Zealand and Israel are examples. In these countries there is no need to call constituent assemblies, and no provision to do so, as the legislature can effectively modify the constitution. If such a country decides to implement a constitution, presumably some sort of constituent assembly will have to be set up for the purpose.

The constitution of New Zealand consists of a collection of statutes (Acts of Parliament), Treaties, Orders-in-Council, Letters patent, decisions of the Courts and unwritten constitutional conventions. Because it is not supreme law, the constitution is comparatively easy to reform, requiring only a majority of Members of Parliament to amend it.